The Judiciary is on the spot over massive wastage of funds at its disposal even as it fights the slashing of financing by the Treasury, claiming it is being targeted due to some of its rulings.

Records at our disposal and a spot check across the country reveal several stalled projects, which have already been financed and a number of properties sitting idle, including the Chief Justice’s House in Runda which has never been occupied.

Chief Justice David Maraga is still living in his own house in Karen like his predecessor Willy Mutunga who lived in his own apartment during his tenure. The ghosts of procurement illegality for the Sh310 million house paid for in 2014, which led to the ouster of former registrar Gladys Shollei, has followed the new administration, which has been unable to put an end to the matter.

It is this property that was the subject of a bitter falling out between Shollei and the Judicial Service Commission then chaired by Mutunga. Shollei has since moved on and is the Woman Representative for Uasin Gishu.

The unoccupied house is still being guarded round the clock by Administration Police officers, two at any given time. Its swimming pool has dried up and bushes in the compound have over grown due to neglect.

But Judiciary Registrar Anne Amadi says they only got the title deed for the property in April and are now estimating what repairs need to be done. She says a quantity surveyor’s report will form the basis of bill of quantities that will enable the Judiciary to know how much money is required for the project before floating tenders to contractors.

“The bill of quantities is being done. No renovation has taken place in the past due to lack of funds,” she told the Saturday Standard.

On the issue of Court of Appeal judges, there are plans to move them to a new building, four years after they rejected one in Upper Hill, Nairobi. 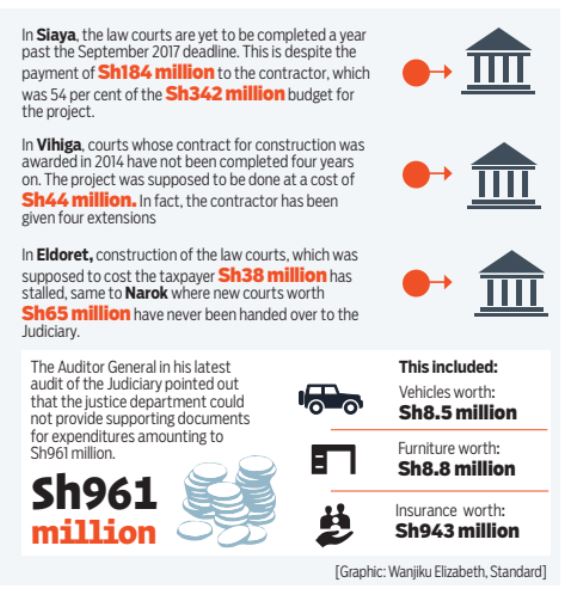 The court’s president, William Ouko, told the appellate judges when they met in Mombasa in April that a suitable land had been identified and an architect attached to the Judiciary was to share designs for the proposed building. However, Amadi says there are no plans to move the court any soon.

Appellate judges refused to move to Elgon Place in 2013, arguing that the building was emitting radioactive material, which could be harmful to their health.

Amadi says the lease was terminated in 2014, adding that a case in which the leasing company sued the Judiciary for terminating the deal was still pending in court. The Judiciary could pay millions of shillings if the case goes the company’s way.

Documents that were tabled before Parliament a few years ago showed the Judiciary overpaid for the lease by more than Sh70 million.

Lack of funds has been the bone of contention between the executive and Parliament on one side versus the Judiciary of late. The Judiciary had requested Sh31.2 billion to fund its operations for the current financial year. It was however allocated Sh17.3 billion by Treasury but Parliament further reduced it to Sh14.5 billion.

“While we shall continue doing our best to deliver justice to Kenyans, judicial services will this year be severely affected as a result of the budget cuts. Please bear with us,” the CJ said last month, adding that as a consequence of the budget cuts more than 70 per cent of court construction projects will stall.

However, on the ground, the Judiciary is grappling with dozens of stalled projects without clear explanations. Some of them are due to lack of funds but in others, money was paid but contractors have failed to fulfill their end of the bargain.

In Siaya, for example, the law courts are yet to be completed a year past the September 2017 deadline. This is despite the payment of Sh184 million to the contractor, which was 54 per cent of the Sh342 million budget for the project.

In Nakuru, construction of the law courts has stalled without an explanation, despite the Judiciary having paid Sh274 million to the contractor. In fact, Auditor General Edward Ouko has raised a query about this stalemate saying, “It is not clear why payments exceeded the value of work done.”

In Eldoret the situation is the same. Construction of the law courts, which was supposed to cost the taxpayer Sh38 million has stalled, same to Narok where new courts worth Sh65 million have never been handed over to the Judiciary.

In Vihiga, courts whose contract for construction was awarded in 2014 have not been completed four years on. The project was supposed to be done at a cost of Sh44 million. In fact, the contractor has been given four extensions, two of which, the Auditor General says, had not been approved by the tender committee as required by law.

Then there is the issue of getting refunds when they pay for repairs of the official cars out of their pockets. There are claims that are pending from as far as 2016, and the amounts are as little as Sh6,000. "I cannot keep making calls to demand such an amount not only because it is tiring, but I will also be considered petty," a senior judicial officer told us, adding, they just suffer in silence but when the public hears of cash-related problems at the Judiciary, they think judges are to blame. "We are victims too."

The Auditor General in his latest audit of the Judiciary pointed out that the justice department could not provide supporting documents for expenditures amounting to Sh961 million. This included vehicles worth Sh8.5 million, furniture worth Sh8.8 million and insurance worth Sh943 million. “Management explained that documents relating to group personal insurance were taken by the Ethics and Anti- Corruption Commission (EACC) for investigation,” Mr Ouko said.

However, Amadi says the project delays were not caused by the Judiciary but the Integrated Financial Management Information System (IFMIS) downtime and budget cuts in the middle of the financial year.

“In Hamisi, Siaya, Eldoret and Narok we have only paid for the work done. We still owe contractors a lot of money in unpaid certificates. They can only resume after paying what is rightly due to them. The constructions cannot resume with the reduced budget for this year,” she says.