Can’t pay, won’t pay: Why your insurer will not settle your claim 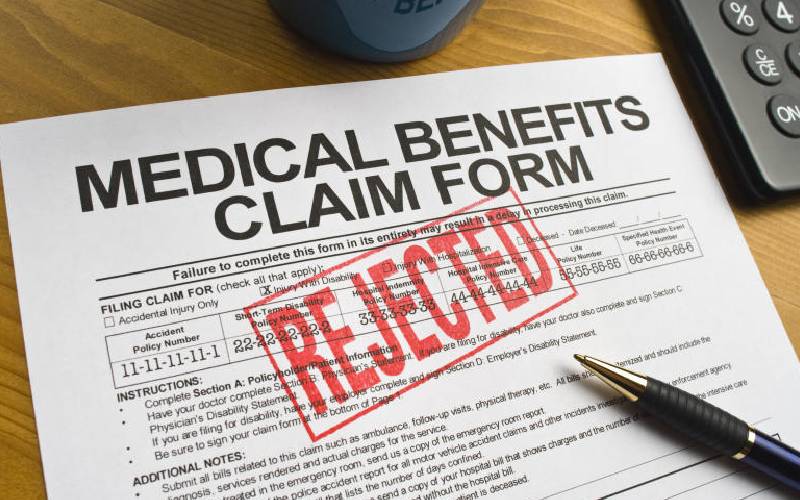 Simple mistakes like not checking if a particular ailment is part of one’s policy cover make up the long list of why insurers reject some medical claims.

Errors such as misspelling names when filling in the claim form may also make your insurer repudiate a claim.

While some patients may never know that their claims have been rejected, health service providers take a hit on such claims daily, according to Abdi Mohammed, co-founder and chief executive, Ladnan Hospital.

It means whenever a facility cannot authenticate a claim for services already delivered, an insurer will not honour it.

Some of the grounds for rejecting claims include instances where a service provider fails to notice that a patient’s medical card has expired. In other cases, it could be the exemption of an ailment.

“For example, if a patient’s cover does not include HIV and you do not check those small rules on exemption, the insurer will not honour the claim,” explained Dr Mohamed.

Double entry of claims can also cost the service provider their dues.

“You find there are two invoices for the same person,” said Mohammed.

There are also incidents where some facilities inadvertently exceed a patient’s cover limit.

“You find that the pharmacy limit is Sh5,000, but the hospital has given Sh7,000 or Sh8,000 worth of drugs,” said Mohamed, who is also the chairman of the Kenya Association of Private Hospitals (Kaph).

While no data is available on the impact the rejected claims have on the profitability of private health facilities, as they are not publicly listed, a look at industry-wide data is telling.

Before 2019, the medical insurance business was a loss-making venture. In 2017, insurers made an underwriting loss of Sh514 million, with the figure rising to Sh1.08 billion in 2018.

But the firms seem to have tightened loopholes arising from the laxity in the verification of claims to post a profit of Sh214 million in 2019.

This rose to Sh1.7 billion last year on account of fewer claims, according to the Association of Kenya Insurers (AKI).

The insurance business is considered profitable when fewer claims are paid out.

“Medical insurance recorded the highest underwriting profit of Sh1.7 billion, which may be attributed to people staying away from hospitals, resulting from fewer (hospital) visits due to fear of Covid-19,” reads the report.

AKI in a statement noted there are no specific reasons that would cause a claim to be rejected but cited several scenarios that would lead to the same.

“Claims are mostly rejected on the following grounds: cover limit is exhausted, cover excludes Covid-19, member not covered, for example, an overage child, cover is expired, and fraud,” said AKI.

Lack of specificity of these reasons could be what Dr Mohamed described as “flimsy,” which sometimes forces facilities to re-submit claims after rejection.

He said they would “look for small errors.”

“If the reasons for rejection is flimsy or amendable, then you amend the claim and return. If not amendable like exemption of an ailment or such, you take the loss,” said Mohammed.

Between March 2020 and June this year, AKI said, insurers rejected most of the Covid-19 claims but ended up forking out Sh1.3 billion on the same.

“The rejected claims, during the stated period stood at Sh396 million, representing 23.3 per cent of the total claims,” said AKI.

The main reason for the rejection of the claims was the lack of clarity in some policies if Covid-19 was one of the ailments covered or not.

This is considering the scientific evidence of the link between Covid-19 and some ailments like diabetes and hypertension, which are already covered in most policies.

AKI noted that following the first case of Covid-19 in the country in March last year, it emerged that there was mixed practice when it came to coverage of pandemics. While some insurers excluded it in their policies, others had no mention of it.

“Medical insurers have since been clear in their policies to state whether it is an inclusion or exclusion and, if included, the cover limit is specified,” said the regulator.

“Considering this, not all claims that were lodged during the period March 2020 to June 2021 were paid, and this could be attributed to the different scope of covers.”

New scientific evidence shows we are well on our way to recording a 1.5ºC increase in global temperatures above the pre-industrial levels.