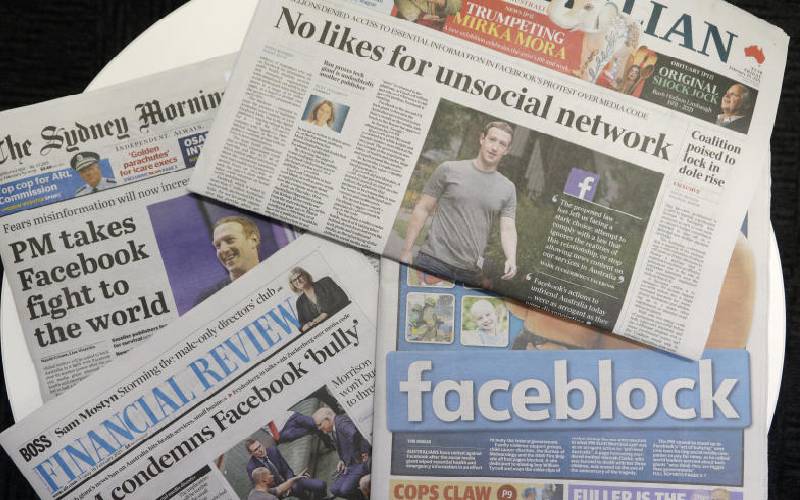 As information continues to become more easily available and accessible through various digital platforms, media outlets are increasingly controlling what is availed to major tech companies.

Last month, social network giant Facebook found itself in an international Public Relations nightmare after it blocked Australian users from sharing or viewing news content on the platform, including those offering Covid-19 updates and weather services.

Facebook was responding to a new law by the Australian government that compels tech giants such as Facebook and Google to pay Australian media outlets for news content on the platforms.

Treasurer Josh Frydenberg said in so doing, Australia would become the first country to require Facebook and Google to pay for news content provided by media companies under a royalty-style system.

“It’s about a fair go for Australian news media businesses. It’s about ensuring that we have increased competition, increased consumer protection, and a sustainable media landscape,” said Frydenberg.

Kenya’s Data Commissioner Immaculate Kassait, who last month marked her first 100 days in office, did not say whether Kenyan regulators would adopt decisions made by governments and regulators in countries like Australia, France and Britain in dealing with Big Tech.

Ms Kassait, however, said the government is at the advanced stages of publishing new guidelines that will require compliance from both local and international players.

“Without responding to a specific case I will say when it comes to data protection, players, whether Big Tech or SMEs, as long as they are based in Kenya or are dealing with Kenyans’ data, they are expected to comply,” she said.

The Communications Authority of Kenya (CA) said it would undertake a study later this year that would inform how it progresses with regulating Big Tech, including compelling companies like Google and Facebook to share revenues with Kenya content producers.

“Once the study is done, we will have the benefit of knowing how to proceed,” said Acting CA Director General Mercy Wanjau.

However, others argue that the individual cases in other countries cannot be adopted as a standard for Kenya’s policy formulation.

“Australia cannot set a trend because our market is not the same,” said former ICT Permanent Secretary Bitange Ndemo.

According to a recent Reuters report, about 3,000 journalism jobs have been lost in Australia over the past decade as traditional media companies “bled advertising revenue to Google and Facebook which paid nothing for news content.”

Facebook, however, said the law would open the company to a flood gate of financial claims and that if it was passed, the social network would have no choice but block content from news sites.

According to the company, the tiff with Australian authorities is based on a misunderstanding of the relationship between Facebook and news publishers.

“It’s the publishers themselves who choose to share their stories on social media, or make them available to be shared by others because they get value from doing so,” said Facebook’s Vice President of Global Affairs Nick Clegg.

According to Clegg, news links are a small part of most Facebook users’ experience, and the tech firm should not be asked to pay an exorbitant price for the same.

However, experts have for years pointed out that the success of platforms like Facebook and Google hinges on funnelling all internet traffic to their websites and keeping users walled in through a network of apps that track and analyse the minutest of digital activity.

As the platforms compete with media houses for digital advertising, the former has an advantage over their competitors since they carry the news that the media houses themselves produce and depend on to keep their online audience.

Medics in six counties get first dose of vaccine

Acting Director-General Health, Dr Patrick Amoth was among the first people to receive the jab

By Kepher Otieno | 1 day ago