The unlikely savings Nairobi’s middle class made from Covid-19 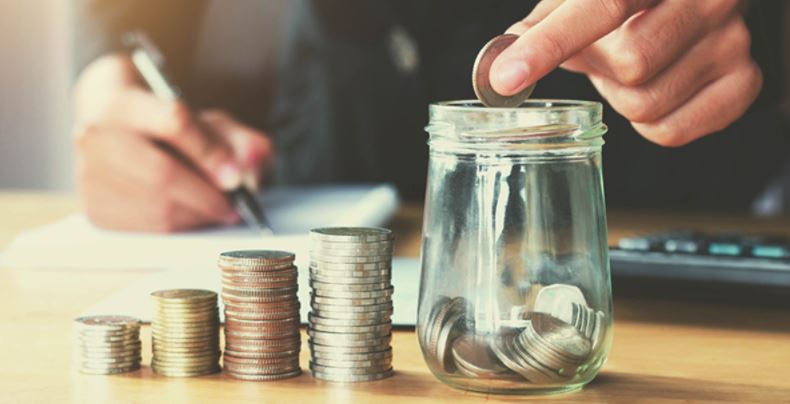 You know them; you are probably one of them.

They are aspirational and eat life with a big spoon.

Some people call them spendthrifts or shopaholics. Scholars call them the consumer class. And they are basically the engine of consumption in an economy.

But immediately Covid-19 broke out and the country instituted stringent containment measures that saw movement into and out of some counties restricted, a dusk-to-dawn curfew, closure of hotels, pubs and other entertainment joints, consumption patterns changed.

By restricting movement, the government might have taken the consumption sting from the middle class.

Official data shows that the middle class in Nairobi, compared to other income groups, saw their cost of living drop significantly.

But why? Because despite some of them having had their salaries slashed, they spent less money on such items as salons, restaurants, barbershops, pubs, travelling, parks and school fees.

The difference is due to the weight that the different income groups place on different consumer items.

Food, for example, takes up a huge chunk of poor families’ income. The rich spend more on transport compared to the poor and the middle class.

As a result, when there was little movement, including leaving the country, the cost of living for the rich dropped significantly.

But the middle class, who, unlike the poor who were working in hotels, have not lost their jobs, they are now enjoying a lower cost of living than the other classes.

Scholastica Odhiambo, a lecturer at Maseno University, attributes this to the fact that the middle class, unlike the poor, for example, are likely to buy in bulk rather than single units, which is more expensive in the long run.

“They are also more likely than the low-income group to visit supermarkets, where goods are discounted. Shops’ prices vary with the supermarkets,” said Ms Odhiambo.

The government also gave a number of tax reliefs, including the reduction of valued added tax from the standard 16 to 14 per cent and Pay As You Earn (PAYE) from 30 per cent to 25 per cent, which might have left the middle class with more disposable income.

The poor in Nairobi, who are mostly in the informal sector and do not pay taxes in the first place, however, did not benefit from such incentives. 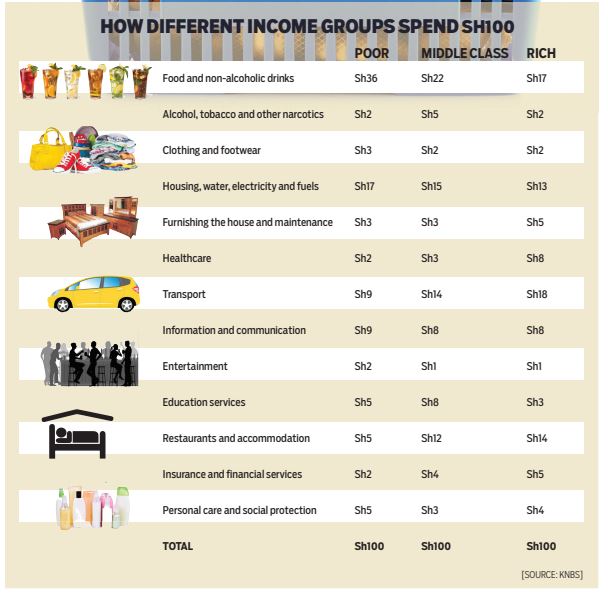 How is inflation calculated?

Inflation is calculated using what is known as Consumer Price Index (CPI). CPI is also known as the cost of living index.

CPI includes only consumer goods and services in order to determine how rising prices affect the income of consumers.

To compute CPI, every month KNBS collects market prices for different items from retail stores and landlords all over the country.

Based on these monthly enquiries, KNBS records average prices for a “market basket” of different items purchased by a typical family.

Each consumer items is then given a weight. All these weightings add up to the CPI.

These items are then included in some broad categories, including food and non-alcoholic drinks, housing and maintenance, transport, health, education, communication, entertainment and personal care.

The annual inflation rate is basically computed as the percentage change in the official CPI from one year to the next.

Why knowing about inflation is important

When prices rise, people worry whether the rise in the income will keep pace with inflation. And the more quickly prices rise, the more people suffer from the stresses of inflation and its uncertainties.

This is why, perhaps the main job of the Central Bank of Kenya, is to stabilise the prices in the economy so that people can invest without being worried about volatility in inflation.

Inflation also has its benefits. Holders of wealth are happy when inflation goes up, as the value of assets tends to increase as prices rise. But inflation penalises those without wealth. As prices rise, it becomes more difficult for them to buy a home or acquire other assets.

One of them is that suppose you spend all your money, on potatoes, chicken, and rent and the prices of these items fall, but overall inflation increases by five per cent.

In this case, your real income – the difference between your nominal income and inflation – will rise, and the official inflation rate based on the CPI will overstate the impact of inflation on your standard of living.

CPI also does not take into account the quality; it only looks at changes in prices. For example, if you buy a better TV expensively, the increase in price reflects better quality instead of simply a higher price for the same item.