Fruits of privatisation sour as most divestitures fail to excite 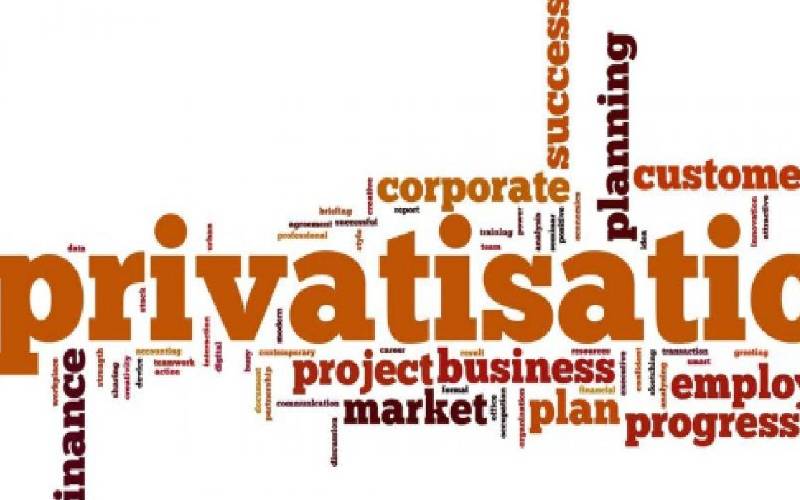 Privatisation of Kenya’s State entities was a noble idea. It was meant to make firms more efficient and wean them off political interference and reliance on taxpayers sweat.

The companies were expected to swim in huge profit under private hands. However, the mission was exploited by greed, inefficiency and mismanagement by those bestowed the duty.

This saw some of the divested firms milked dry by those who were supposed to midwife the process – leaving them worse off than they were at the time of disposal. Even worse is that in some cases, taxpayers have continued to pay for the misdeeds of these private shareholders and directors.

Historian and journalist Martin Meredith wrote in his book, A history of the Continent after Independence, that after resisting pressure from the West to have dysfunctional public enterprises privatised, African leaders, after some thinking had a Eureka moment and dropped their hard-line positions.

“Initially hostile to the idea of privatising parastatal organisations which provided them with a major source of patronage, they came to realise that the business of privatisation itself could be used as a means of patronage,” says Meredith.

And so, beginning in the early 90s up to the mid 2000s, Kenya joined other African countries in aggressively disposing of moribund State corporations in what was aimed at making them efficient and increase the country’s output.

Kenya Airways, one of the companies that were privatised, might soon return to the national government’s fold.

Last week, Members of Parliament accepted the proposal to have the airline nationalised as a means to get it out of turbulence.

While the privatisation programme has yielded a number of success stories, there are a few special cases that might have fallen victim to what Meredith described as “crony capitalism.”

Samuel Nyandemo, an Economics lecturer at the University of Nairobi, says that while privatisation is good - helping ailing companies and thus leaving the economy more vibrant - Kenya’s approach and by many other African countries has been wrong.

“The only place which has successfully done that (privatisation) is Ghana,” he says.

“In other African countries, privatisation has been pushed to enrich the chosen few who are supporting the government of the day.”

Kenya’s privatisation programme was carried out between 1992 and 2002 at the behest of the World Bank and the International Monetary Fund (IMF). It had mixed results.

Some public enterprises that were privatised such as Kenya Posts and Telecommunications Corporation - which was split to create Safaricom - have put Kenya on the global map, unleashing an huge number of jobs. Others such as Mumias Sugar have been nothing but disaster, leaving millions of farmers jobless and in destitution.

The programme identified 207 non-strategic commercial public enterprises which were to be privatised, in what was aimed at shifting the responsibility for production and delivery of products and services from the public to the private sector.

For companies such as Kenya Railways, where former Transport Permanent Secretary Gerishon Ikiara says he used to visit Treasury every month to beg for money to pay salaries, privatisation was meant to reduce the demand on the Exchequer.

The programme was also meant to rationalise the operations of State entities, improve the regulatory environment, broaden the base of ownership and enhance the capital market development.

Privatisation was done mainly through a public offering of shares, concessions, leases, divestiture, management of contracts and other forms of public-private partnerships, negotiated sales resulting from the exercise of pre-emptive rights, and sale of assets including liquidations.

But it seems as though what was expected to be a game-changer has in some instances fallen through - leaving the enterprises struggling or even worse off than they were before the divestiture.

Kwame Owino, the CEO of Institute of Economic Affairs, says the Government needs to decide whether it supports privatisation.

“It is a waste of resources if we are saying that a business is privatised but the Government is pumping billions into it,” he says.

“If you intend to privatise, do it completely.”

In 2017, Kenya Railways which was privatised through a concession in 2006, reverted to the Government. The concessionaire, Rift Valley Railways, had barely done 10 of 25 years of the contract when it was stopped in its tracks.

The concession could as well find a place in financial books on how to ruin a privatisation programme.

East Africa’s oldest state corporation - one that played a major role in the development of Nairobi as a city and economic transformation of Kenya - was sold to Sheltam, a shell company owned by South African investor Roy Puffet.

Mr Puffet, who it was discovered had no capacity to run the railway line from Mombasa to Jinja, bought a 35 per cent stake in the consortium that finally won the tender: Rift Valley Railways (RVR).

However, RVR hardly did better than its predecessor even after offloading thousands of workers in a restructuring programme that was financed by the World Bank.

In the same year that the Government decided to take over the operations of the railways, a World Bank audit had revealed that top managers at RVR had conspired to defraud lenders and the Kenya Revenue Authority (KRA) of billions of shillings.

They bribed public officials and concealed the firm’s true financial position in a bid to get a Sh2.2 billion from the World Bank’s private sector arm, International Finance Corporation (IFC).

The story is not that different from that of Mumias Sugar. The Government relinquished 32 per cent of its stake in the miller in 2001 through a public offering.

Currently, the company is as good as insolvent after a series of losses saw its liabilities surpass assets.

In the financial year that ended June 2018, Mumias plunged further into the red after its losses increased by 122 per cent.

The cash-strapped company suffered a net loss of Sh15.1 billion compared to Sh6.8 billion in the 2017 financial year.

While most of Kenya’s sugar millers have been operating in a difficult environment, Mumias’ woes might have been aggravated by mismanagement.

A parliamentary draft report on the ailing sugar industry found that former Nairobi Governor Evans Kidero, who was previously the managing director of Mumias Sugar, should take “full responsibility for the fraudulent transactions.”

The report accused Kidero of overseeing the looting of the country’s major sugar miller, watching as the listed firm’s officials worked with Republic of Congo, South Sudan, Sudan and Ethiopia. A number of officials have since been identified for prosecution.

Just like Mumias Sugar, Uchumi Supermarkets was doing fine after privatisation until it became apparent that the dazzling performance was but a front.

The retail chain, which was part of the many commercial non-strategic public enterprises on which the Government loosened its hold, is a shell of its former self. Its shelves are gathering mold.

Financially weak, it has flimsily been losing some of its prime properties and has shed a number of employees to stay afloat, but it keeps sinking.

No one is willing to come to its aid, its appeal for Government bailout have fallen on deaf ears. No strategic investor is willing to come on board, fearing they will sink with the retail store. Yet, Uchumi’s financial woes are not any different from those of other embattled former public enterprises.

The Government, through the Industrial and Commercial Development Corporation (ICDC) had 90 per cent stake in the retail chain.

This was reduced to 44 per cent after an Initial Public Offering (IPO) in 1992.

Before the High Court cleared former Uchumi Managing Director Jonathan Ciano of fraud charges, the Capital Markets Authority, relying on a forensic audit report by KPMG which found that Mr Ciano was among the retail store’s largest suppliers, slapped him with hefty fines.

Mismanagement and corruption have been cited as Uchumi’s bane, departing from the initial expectation that privatisation would leave the retail store better off.

The national carrier christened The Pride of Africa was privatised in 1996 when the Government brought on board Dutch airline KLM as a strategic partner.

It has since then experienced turbulence, including shareholder wrangles where KLM has been perceived as wielding too much power owing to an agreement heavily skewed in its favour at the detriment of the other shareholders.

The airline has also reported a string of major losses, the worst being in 2016 when it made a net loss of Sh26 billion.

This has been reducing as it implements a turnaround strategy and last year reported a Sh7.5 billion loss for the full year to December 2018. Kenya Airways, together with Government are evaluating possibilities of nationalisation, which would possibly kick out other shareholders.

The plan to have the airline’s ownership revert to Government was last week approved by Parliament.

The Government sold 51 per cent stake in the telecommunications firm to Orange of France in 2007.

The Frenchmen increased their stake to 70 per cent over the eight years that they owned the firm before eventually selling their entire stake to Helios Investment Partners in 2015.

Treasury had however negotiated with Helios and got 10 per cent of its shareholding back to increase its stake to 30 per cent while Helios retained 60 per cent.

The firm is set to change its ownership structure again, following the proposed merger between Telkom and Airtel Kenya which is currently waiting for regulatory approvals.

The facility at Changamwe, Mombasa is perhaps the perfect example of how the State should not undertake business.

It was initially set up by oil marketers Shell and BP, who were later joined by Esso and Caltex. Esso would in 1997 quit the partnership.

The Government acquired a 50 per cent stake in the facility in 1971. Perhaps that’s when problems for the State began, which would culminate with it wholly owning a facility that is of little or no value today.

In 2009, Shell, BP and Chevron (which had acquired Caltex) sold their stake to Essar Group of India, which was there for a short time and sold its 50 per cent stake in the refinery to the Government in a transaction completed in 2016. By then the refinery had stopped its primary role of refining crude oil.

Nothing spoke of more of Webuye town than the PanPaper mill. The factory, however, went down in 2009 and since then the town, too, has been on a decline.

It was thus with much relief and expectations when the Government announced that it would be privatising the paper manufacturer.

To top it up, the new investor was expected to pump in Sh10 billion in revamping the old plant after buying it for a partly Sh900 million,which critics said was below its real value considering the huge assets it holds.

But this is yet to be seen after the privatisation and a grand re-opening ceremony in 2016.

Rai Group, who are the new owners of the paper mill and renamed it Rai Paper, is yet to make a meaningful impact in terms of reviving the industry.

Twitter’s retweet was a ‘loaded weapon’