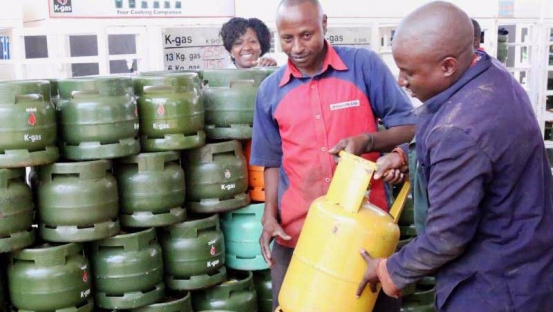 NAIROBI, KENYA: If you have gone shopping for cooking gas in the recent past or did window shopping before settling on where and what brand to buy, you may have probably noticed different pricing by dealers and companies

A 13kg Liquefied Petroleum Gas (LPG) gas cylinder currently sells at anything between Sh1,800 and Sh2,500, with oil marketers aiming to make up for reduced margins after the capping of diesel, petrol and kerosene prices.

However, new entrants, some of whom solely sell LPG, are undercutting players in the fight for market share.

Other LPG marketers are making a kill because of the convenience that comes with selling the essential fuel next to neighbourhood kiosks, saving consumers a trip to a petrol station.

The differences in pricing is, however, one that does not sit well with the Government.

It has given the energy industry regulator impetus to speed up plans to cap the price of cooking gas.

This would mirror what the Energy Regulatory Commission (ERC) started implementing in 2010, where every month, it announces the maximum prices that retailers can charge for other commonly used petroleum products – petrol, diesel and kerosene.

“The companies are buying at a wholesale price of about Sh90 a kilogramme, but the retail price is double that,” said ERC Managing Director Pavel Oimeke.

“If we bring in price regulation, it can help reduce the prices to about half of what we have as retail prices, which would be about Sh500 or less for a six kilogramme cylinder.”

Regulating prices of cooking gas is a debate that has been going on since the Government started capping pump prices of oil products.

Oil marketers as well as other LPG dealers have opposed the move, arguing that a liberalised LPG market offers them an avenue to offset what was lost in income when the price caps on fuel were introduced.

The counter-argument, however, is that high prices have stagnated growth of the use of LPG in the country - a cleaner fuel compared to kerosene, charcoal and wood fuel used for cooking and lighting by majority of urban poor and rural households.

Low uptake of LPG and other cleaner energy sources has also been cited as a threat to the country’s dwindling forest cover due to the ever rising demand for charcoal and firewood by low-income households.

According to Oimeke, a number of factors have prevented the Government from instituting price caps for LPG, key among them, limited handling facilities for importers of gas at Mombasa Port.

The Kenya Petroleum Refineries Ltd (KPRL) operated a facility for offloading LPG from ships. This has, however ,gone into disuse after the refinery was shut down.

Even then, the jetty’s capacity was inadequate to handle the growing demand for the commodity and ships would take long to offload, which meant additional costs that were passed on to consumers.

Currently, the industry relies on a private facility owned by Africa Gas and Oil Ltd (AGOL). AGOL is a common user Manifold that serves all gas importer.

Being privately run, Oimeke notes that the Government cannot dictate terms and when the cargo is brought in, the marketers have an upper hand in determining market prices.

“There are a lot of things going on behind the scenes that are geared at eventually enabling us regulate prices and one of them is a planned LPG common user facility in Mombasa that will enable players import and easily offload large quantities of LPG,” he said.

“All players can import and only pay handling charges, just like the case with petroleum products where the marketers own the product and pay to move it using KPC infrastructure.”

The company, which has been prepping KPRL for the suspended Early Oil Pilot Scheme that will enable Kenya export crude from Turkana on a pilot basis, said it had started evaluating the refinery’s facilities with a view of putting in place a common LPG user facility storage.

Through the common user facility, oil marketing companies will be able to import large shipments of cooking gas.

Vailability of storage and offloading infrastructure accessible to all players would enhance the Government’s control. ERC plans to put in place an import system that requires marketers to jointly import LPG as is the case with the other petroleum products.

“It is a short to medium-term strategy whereby in about five years, we will have an open tender system that is similar to the petroleum OTS,” he said

“Through the system we will be able to consolidate the requirements of industry and float a tender and whoever wins can bring one shipment for the industry that takes advantage of economies of scale. We have weighed the options and think that regulating prices can only happen when we have a common user facility,” said Oimeke.

He said the high cost of gas cylinders has put off many users in Kenya, noting every time there is an incentive to increase access, there has been substantial growth in the number of Kenyans ditching the charcoal and wood fuel for LPG.

These include the universal valve that enabled Kenyans to buy gas from any vender irrespective of the brand.

He adds that making cooking gas affordable through market-led or regulatory mechanisms is bound to grow consumption, whose demand he terms suppressed.

The Ministry of Energy is set to implement a programme that will see it distribute subsidised 3.6 million cylinders to low-income households over the next three years, with a planned distribution of 1.2 million cylinders annually. “LPG demand is suppressed. It has not grown because the product is not there. Gas cylinders are not sufficient and the product is not available to many families.” said Mr Oimeke.

However, according to an industry source who did not want to be named, the way to increase gas usage was not by replicating what is already exists — the gas terminal. The source said the Government should instead make decisive steps by pushing National Oil to purchase gas cylinders and distribute them on a large scale for free.

“This way, you’d discourage use of charcoal and encourage use of cooking gas. It would increase the per capita consumption ratio of gas as opposed to wasting resources in the construction of another gas handling facility,” he said.