The value of a good reputation 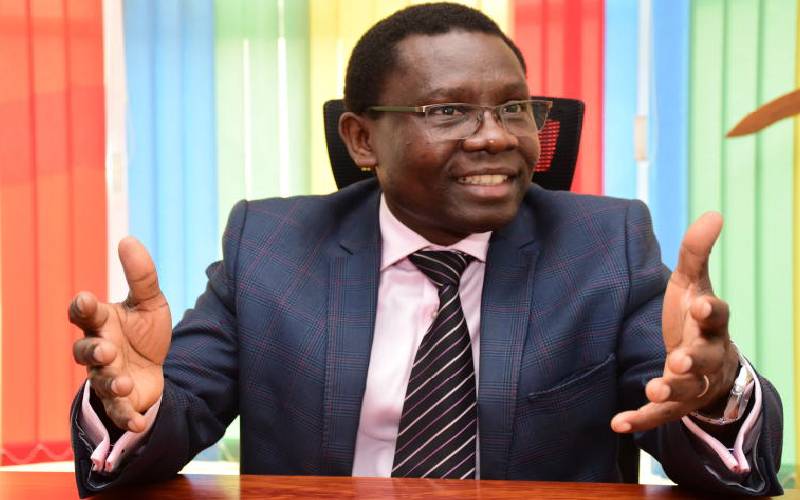 Over the past two decades, Fred Waswa (pictured), Group CEO for Octagon Africa Financial Services Ltd, has built and grown his name in the pensions business.

Waswa spoke to Hustle on his experiences when starting out, the importance of a good name, and what he wishes he knew when he first ventured into business back in 2000.

“I first got involved in pensions in 1985 when my A-level maths teacher pointed out that that I was very good at the subject and should consider pursuing Actuarial Science. I knew very little about it, but he convinced me to do the exams and even paid for one exam that I sat that year.”

Waswa is the first born in a family of eight, hence the company name Octagon.

His father died when Waswa was 14, and he knew his mother couldn’t afford to pay his fees beyond his basic education, yet actuarial exams cost a hefty sum.

“I went to university and studied mathematics with a major in statistics at the University of Nairobi. In 1999, the then finance minister, the late George Saitoti, gave the directive that every insurance company should have an actuary. That is when I decided to apply for my first job to be an actuarial trainee.

“I did underwriting and life assurance. I worked for two years and found myself bored to tears looking at files all day. I decided in 1993 to make a move to Fidelity Shield Insurance Company to do pensions.”

Waswa had discovered in the midst of his work that it is in pensions that a lot of actuarial work was done, and that’s where his pensions career started.

He worked for six months before his life changed.

Too bright for the light

“My boss pulled me aside and told me I was too bright for the organisation. Every time he gave me work, I would finish it in record time and ask to do more. He asked to move me to marine underwriting and he would get me a job. I was torn; I had just moved to pensions only to return to underwriting.

“He made several calls to get me to Aon Minet, which was the largest administrator explicitly of pensions. I worked till 1996 when Standard Chartered advertised a job opening for a pension administration manager. I told my boss I was interested and he was stunned. He told me that it wasn’t a good idea, having worked at a bank himself before he knew it wasn’t a good fit.”

But Waswa felt he had nothing to lose. He applied and got no response until months later when the position was re-advertised. Only this time, they were outsourcing the administrator.

“So we applied as a company and StanChart brought people from the UK to vet Minet and other applicants. It wasn’t until months later that we were called for interviews.

“We were seated in a board with my colleagues and other elderly associates in the industry. I knew I wouldn’t get it. The guy chairing the meeting was Mr Roger Urion, Africa’s Pension Manager. He looked at me for a while and then asked where he had seen me.”

They had indeed met the previous year. He had visited Minet and Waswa had shown him around.

Their company got the job.

Urion had worked for five years at the bank as MD, and had been brought back in East Africa to restructure pension funds from defined benefits to defined contributions. He was looking for a right-hand man.

“We started working in Zambia and Zimbabwe and Uganda before coming to Kenya. It was the biggest project I ever did – a Sh6 billion fund with 4,800 members. We finished in December 1999 and in every country, we would outsource the services and retain a principal officer. So I was the principal officer in Kenya.”

Waswa got bored yet again as the workflow dwindled, and talked to his boss to give him more responsibilities.

“He gave me compensations, a job that only occupied me for a while before I became bored yet again.”

And then a new opportunity arose.

Every company was running around looking for someone who could help them understand the regulations and restructure their pension schemes.

Waswa had undergone rigorous training to improve his knowledge of pensions. He had also partnered with the Nairobi Securities Exchange (NSE) to train their trustees.

“Towards the end of 2000, my boss was about to retire and I was set to replace him as the Africa pensions manager. He was giving me instructions on what to do, but I told him I did not want the job. I was 35, young and full of energy. I did not want to work there until retirement,” recalls Waswa.

After assessing all the risks, Waswa decided that once Urion retires, he would quit his job and team up with him to open a consultancy.

But, “Urion declined the offer.”

Waswa then approached the chairman of the fund.

“I told him how I had worked for the bank for almost four years and I wanted to quit. He applauded my idea but urged me to consider the greater possibility of failure.”

But young Waswa was confident that even if he failed, he had time to get back up.

“I convinced him to try change Urion’s mind. I needed Urion’s experience and expertise and would not take ‘no’ for an answer. Urion was adamant about going to Zimbabwe after retirement, but after seeing my passion, he agreed to be a director.”

Waswa registered Kingsland Court in honour of Urion’s homeland in the UK.

But in 2001, just as he was planning to resign, Urion broke the news to him that he had been asked to take a three-year job in Sierra Leone.

“He asked me if I could wait until the end of that contract before quitting my job. I couldn’t. I was too psyched, but I was not happy because with him gone, I needed funding.

“I resigned when we were getting into the 2002 elections. Economic growth was less than 1 per cent and my employer thought the idea was stupid, asking how I reckoned I would make it. I believed God was going to work for me behind the scenes. Whoever started the bank years ago took a risk and it was fruitful. If that was stupid, then I was willing to try.”

But it was not smooth sailing.

“The pension schemes that were knocking on my door earlier would now tell me we’ll have a meeting in September, yet we were in May. I was disheartened. I only had the pay from NSE to fall back on.

“But I was lucky, or rather, blessed enough to work for StanChart from the outside. I was to work two days for the bank and use the three days to work for myself. The three-year agreement started and I was getting Sh60,000 monthly. I tried to bump it up to Sh130,000, but didn’t get it.”

And then Waswa hit another bump. Urion was back from Sierra Leone and had set an ultimatum. If Waswa had no other client by the time he returned, they would close shop.

“I spent a week in December at a prayer shrine in Machakos praying for a miracle.”

And his miracle came in the form of a job from an Embassy. He closed his second client right there in Urion’s humble garage office. They signed the agreement and agreed on a payment of Sh300,000, but Waswa was worried he had overquoted.

He discussed it with his associates before settling on a final quote of Sh800,000.

The client could not trace some money, six months after starting to look for it. Waswa figured out the problem in two days. The client was stunned.

He was invited to the embassy for a conference call to explain how he had arrived at his conclusion.

“The client, impressed after I exceeded their expectations, paid me Sh2.7 million and gave me a three-year-contract. When people started seeing the companies I was handling, business started streaming in, including major clients like EABL and Coca-Cola. Currently, we have 200 corporates under our administration, with a fund value of Sh100 billion.”

But in 2006, new challenges arose in the partnership with Urion when he came back.

“I asked him if we could move the business that had spread into his unused five-bedroom home with a staff of 21. He asked me to move alone.”

Waswa resigned as an executive director and shareholder and in 2007 started Octagon Pension Services, and added to his portfolio as need arose.

“My first job out of secondary school was teaching ... so I am a good trainer. I decided in 2016 to start the Institute of Pension Management just to focus on training. In terms of capacity building for trustees on financial literacy but also for the graduates of actuarial science who know little about pensions.”

Octagon runs professional and corporate programmes for employees of organisations.

“We have a very serious problem with people between the ages of 25 and 35. They are knee deep in debt, and so to get out of the red they leave their jobs to get the pension to pay for the debt. So what we created was first check management, to teach this group how to manage their money. It teaches them not to take loans except for appreciating assets and not for a holiday in Dubai.”

Waswa has since taken Octagon to Uganda and Zambia, and recently bought out Alexander Forbes stake in Zambia. He is looking to expand into more countries.

A suspect believed to be behind a fake money printing syndicate that has rocked Eldoret for months has been arrested.

By Paul Kariuki | 1 day ago

Ways to deal with employee theft

By Brian George | 7 days ago