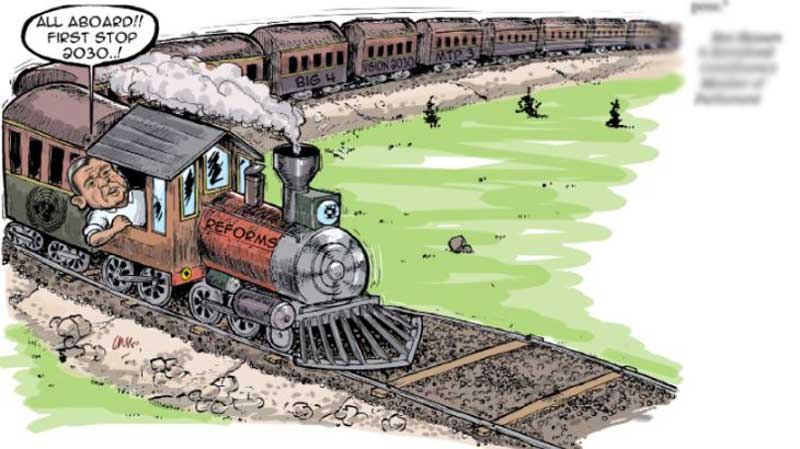 Globally, the United Nations (UN) is witnessing some of the most ambitious reforms led by its Secretary General, Antonio Guterres.

Most relevant to us in Kenya is the entire reform of the development system and how the UN will adapt to a fast-changing development environment.

The countdown to the ambitious SDGs is already on, and the Agenda 2030 timeline implies we should have gone one-fifth of the way towards all the targets by now.

Under the leadership of Ambassador Macharia Kamau, Kenya has been a champion of Agenda 2030.

This includes ridding Kenya of poverty and generally changing the narrative for those on the periphery of development while also ensuring no one is left behind.

Kenya performed relatively well in the Millennium Development Goals; a campaign that has been hailed for lifting more than one billion people out of extreme poverty and making inroads against hunger globally.

However, Kenya was one of the countries that did not achieve MDG goals 4 and 5, which were about reducing maternal and child mortality.

Compared to the MDGs, Agenda 2030 is a double down, with global leaders having agreed on close to 170 targets summarized into 17 goals.

Though countries will have to concentrate on those targets that are most urgent and of priority to them, the goals still mean greater challenges, not only in financing programmes, but in innovating for locally-applicable solutions.

One important transformation is in the operations of the Resident Coordinators(RC) System and new generation UN Country Teams.The Resident Coordinator’s Office is the engine of the UN development system on the ground, providing coordination, strategic policy, partnerships and investments around the SDGs.

In the reforms, the strengthened RC will be the representative of the UN Secretary-General on the ground and the most senior UN development officials at the country level and will be better positioned to ensure operational coherence and synergies in development, humanitarian and peace building action, according to the country context. This took effect on January1, 2019. Alignment of the work of UN in Kenya is expressed through the recently-launched United Nations Development Assistance Framework (UNDAF 2018-2022). The rigorous development process of UNDAF was led by the Treasury and Devolution ministries and coordinated by the UN Country Team.

More than 100 institutions were involved in the process to ensure the framework reflected priorities including Vision 2030, MTP III and President Kenyatta’s bold Big 4 Agenda.

With Kenya classified as a lower middle-income country, financial support to UN agencies has now undergone a considerable down-titration.  Nevertheless, the current UNDAF has still committed up to 80 percent more resources towards finding solutions to the countries challenges between now and 2022.

Prime among those challenges include changing the narrative for the youth and advancing gender equality, but in that challenge lies an ideal common ground for joint programming not only between the development partners and UN, but also bringing in the might of the private sector.

UN Secretary-General António Guterres is leading efforts to ensure that the UN is more effective, efficient, coherent, coordinated and a better performing United Nations country presence with a strengthened role of the UN Resident Coordinator.

The UN Resident Coordinator to Kenya, Siddharth Chatterjee, at the launch of the UNDAF in June 2018, reiterated the fact that the UN agencies in Kenya have their shoulders squared to work with various partners to meet the challenges of our time.

He emphasized that this will not be a “business usual” approach.

No doubt as a global body, the United Nations in Kenya is undertaking bold and innovative action that is required to deliver on the 2030 Agenda.

This was acknowledged in an open letter by the Frontier Counties of Kenya to the UN stating, “The UN Kenya country team has demonstrated in action and words the principle of leaving no one behind and reaching out to the furthest first.

As counties historically marginalised, this ushers in a new dawn of development”.

The President’s Big 4 agenda, the government’s keen interest to see rapid growth, progress and close working ties with the UN in Kenya, Kenya can become a model for the UN, delivering as one and ensuring “no one is left behind”. Therein lies the UN “being fit for purpose.”