The travel and tourism sector at Coast received a major boost after a chartered flight flew in 175 Polish tourists for a 10-day holiday.

This is the first chartered flight to bring in tourists since March, when Kenya reported its first case of Covid-19.

The aircraft, a Boeing 737-800 operated by TUI Poland, landed at the Moi International Airport on Saturday from Warsaw, Poland.

Kenya Tourism Federation (KTF) chairman Mohamed Hersi said its arrival signalled hope for Kenyan tourism, which has suffered heavily due to the pandemic.

"It will be flying in every Saturday up to mid-March 2021. It gives us hope that we are headed on the path to recovery," said Hersi, who is also director of operations with Pollmans Tours & Safaris.

He added that with the discovery of a Covid-19 vaccine, industry players were optimistic that all sectors of the economy would eventually return to normalcy.

Speaking separately, Sam Ikwaye, the coast branch executive officer of the Kenya Association of Hotelkeepers and Caterers (KAHC), agreed that stakeholders are anticipating positive effects with the rolling out of Covid-19 vaccines.

"Vaccines will potentially unlock international tourism as travellers will be free to try out far off destinations with managed fears. It is the first step towards resumption of global tourism after months of uncertainty caused by coronavirus," Ikwaye said.

Hungary and Slovakia became the first countries in the European Union to start mass vaccinations against Covid-19 ahead of planned rollouts in nations like Germany, Italy, France and Spain. 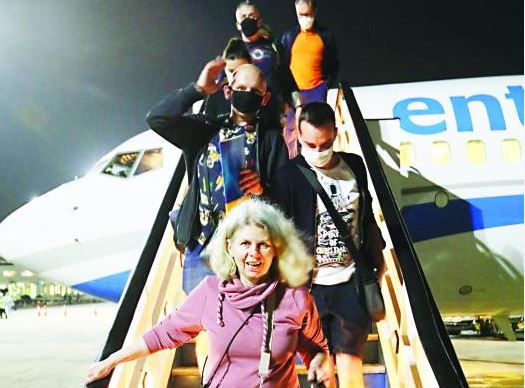 In 2016, Cabinet Secretary for Tourism and Wildlife Najib Balala announced that TUI Group, the world's largest tour operator, had picked Kenya as its next long-haul destination and would put flights on the route. TUI Europe and TUI UK also announced the start of operations then.