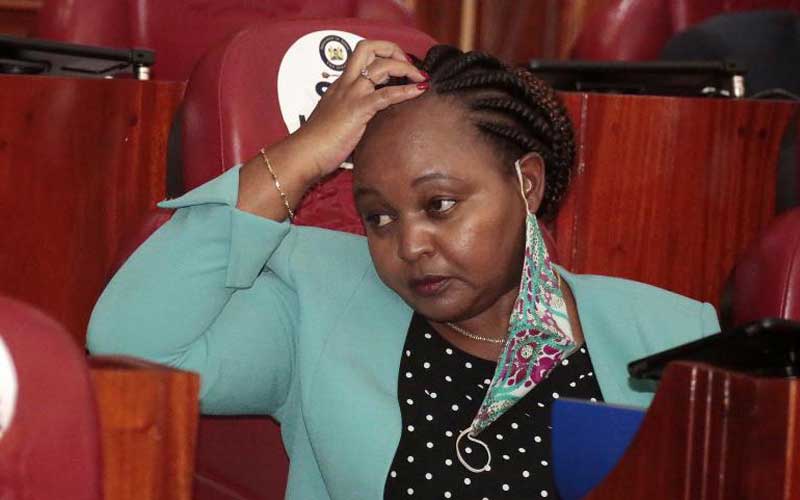 Controller of Budget Margaret Nyakang’o has directed Governor Anne Waiguru (pictured) to adhere to the law in the 2020/21 fiscal estimates.

Waiguru also suffered another blow yesterday after the County Assembly rejected her memorandum on the budget estimates seeking to alter the projections.

In a letter to the governor, Ms Nyakang’o highlighted eight issues the county government needed to clarify before the close of business yesterday so that they may be allowed to draw funds from the county coffers.

Nyakang’o noted that draft budget estimates from the county did not adopt a programme-based framework, which is required in the Public Finance Management Act, 2012.

The county had included a Kenya Devolution Support Project (KDSP) level 2 allocation of Sh146,608,512 in the budget as a revenue source, yet it is not contained in the County Allocation Revenue Bill, 2020.

“We advise the county to ensure the revenue estimates are revised in compliance with allocations contained in the County Allocation Bill to avoid any budget deficit,” the CoB warned.

Budget estimates presented to the CoB also showed Sh2.97 billion, which is 56.2 per cent of the total revenue, was to be allocated to personnel emoluments, but it is above the ceiling provided in law.

“The PFM Act sets a limit on county government expenditure on wages and benefits at 35 per cent of the county’s total revenue. We advise the county to ensure compliance with the legal limit on personnel emoluments expenditure,” Nyakang’o advised.

Waiguru’s government also failed to provide information on the projects to be undertaken and their geographical location.

“The county should provide sufficient information of all the projects in the budget to enhance openness and accountability in line with the constitution,” the CoB demanded.

Budget allocation to some departments also deviated from the ceilings contained in the County Fiscal Strategy Paper, 2019 without appropriate explanations.

The Controller of Budget also noted that in the draft estimates, the county government had allocated Sh2 million to the emergency kitty, which was 0.04 per cent of the total revenue.

“The county is advised to enhance the allocation to the emergency fund to at least 2 per cent of the last audited financial statements of revenue to ensure adequacy,” Nyakango stated.

The draft budget estimates of Sh5.28 billion allocated Sh4.33 billion, which is 81 per cent of the estimates, to recurrent expenditure, leaving 18 per cent to development.

These allocations contravene the PFM Act, which requires a minimum allocation of 30 per cent towards development activities,” Nyakang’o stated.

She warned the county government that failure to address these issues will result to the CoB not to authorise any withdrawal of public funds.

Yesterday, 25 out of 33 MCAs voted against Waiguru’s memorandum, getting the two thirds majority to send the governor back to the drawing board. It sets the stage for another confrontation, which has seen operations in the county paralysed.