Business News
In his letter dubbed, Pastoral Letter of Hope by the ACK Archbishop to the Nation, Sapit said there is still hope despite the situation. 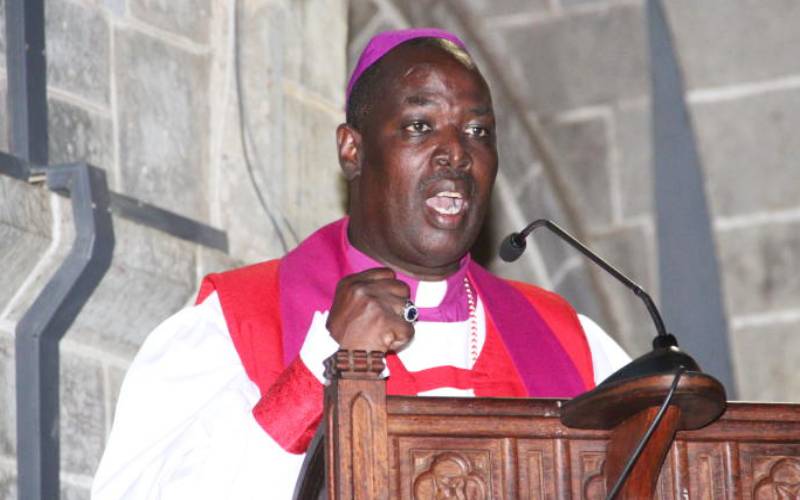 Anglican Archbishop Jackson ole Sapit (pictured) has called on the government to subsidise basic commodities to make life easier for Kenyans as the fight against Covid-19 gathers steam.  The archbishop in a letter to Kenyans, at the weekend, urged the government to provide subsidies on staple foods such as maize, rice and wheat to enable the poor in society sustain themselves during this period.  The head of the Anglican Church in Kenya (ACK) pointed out that those who live in slums have nowhere to turn to as industries are closed and people are stuck in their homes with nothing to eat and any tax reduction will not benefit them immediately. He added that people have no unga and the children will go hungry.

“We urge the government and everyone, including the business community, parastatals, Christians, international community, county governments, professionals and the general public to pull together resources to support the weak, orphans, the suffering and the urban poor in our society currently in need of food and other basic supplies,” noted Dr Sapit. Sapit also urged the government to provide farmers with input during this planting season to ensure that food security is not compromised once the problem of coronavirus ends.  In his letter dubbed, Pastoral Letter of Hope by the ACK Archbishop to the Nation, Sapit said there is still hope despite the situation Kenya finds itself in.  Quoting Isaiah 26:20 which states, “Come my people, enter your chambers and shut your doors behind you: Hide yourself as it were, for a little moment, until the indignation is past,” he urged Kenyans to obey the social distancing and quarantine directives. “We welcome the measures announced by our President and we urge that government efforts should take cognisance of the following realities. The SME’s have most of their businesses closed,” he stated.

The archbishop lauded the efforts being made by the government to keep the public informed of the situation through regular briefings, coordination and strategy intended to curb the spread of the virus.  “We give our appreciations for the unique efforts by our health workers and other stakeholders on the front line who are battling this outbreak. We pray for God’s protection upon you as you diligently serve humanity,” stated Sapit.