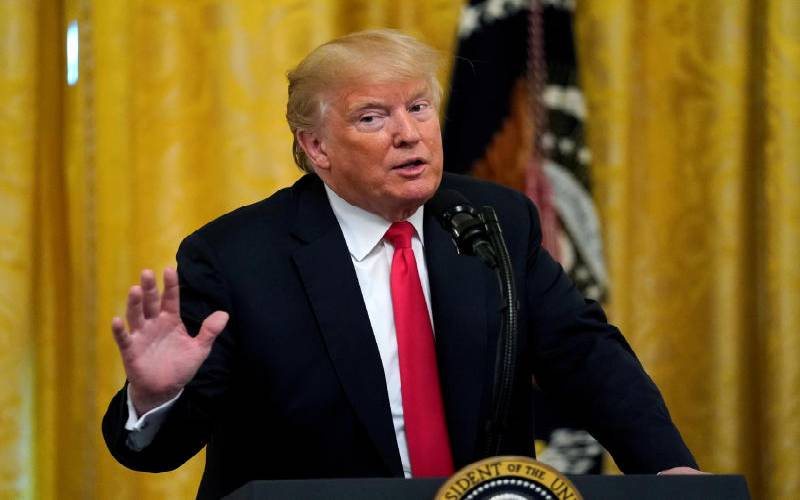 Early May, a video of two lions that had rounded up a deer circulated on social media. As the  lions began tearing into their victim, they fought over who should have a bigger chunk of the catch. This saw them lose the deer. Africa, caught in the clutches of the US and the shrewd Chinese, might as well be that deer. On his inauguration day, President Donald Trump spelled his economic policy that it will be America first. Not that this was a new principle, only that he was more brazen about it and didn’t see the need to hide his hand. Over the last three years, he has worked hard to make this a reality. In principle, the US is the largest economy in the world, meaning they have the biggest purchasing power globally. With a population of over 300 million people and a per capita of Sh6 million, one can imagine why this market is the most attractive globally. To this end, many US allies and trading partners fight to enter this market and supply their goods. Brands such as Toyota, Samsung, Nokia and Nestle found their bearing in the US market.

Sadly, however, these brands grew at the expense of some local brands. Toyota took a significant share of the market from Ford and General Motors. Samsung nibbled away at the market share of Apple and Motorola and Nestle stole the market from Kraft Foods and Mondelez, both American companies. But the problem is bigger than just market competition. In realising that the cost of production of their commodities was cheaper in other countries, many US firms moved their manufacturing bases and plants to the emerging markets in the East, the Caribbean and Latin America. An economic storm Jobs were lost, tax revenues dwindled and the economy plummeted. It takes a strong economy to survive such an economic storm, and America is such an economy.

US President Barrack Obama, then needed to steer them through the storm. He did a good job at it; ending expensive wars, reassuring allies, keeping off threats diplomatically, salvaging a few major corporations and not rocking the boat. But the storm is over and America needs to correct a few mistakes, ensure its power remains unrivalled and punish the capitalists that got them in this mess in the first place. They found a perfect boogeyman for the job - Mr Trump, who first surprised the world when he announced that the US will withdraw from the Paris Agreement on Climate Change. He said the deal was not favouring America as it was taking coal jobs away. He then nullified the Iran deal that Obama worked so hard to get to the chagrin of his European allies. His motivations remain unclear. Beyond this, Trump has antagonised Cuba, North Korea, Venezuela and any country with a leader he doesn’t like. But his best chess moves have been on the trading terrain. First Canada and the European Union, America’s biggest allies were slapped with tariffs on their steel exports to the US. These tariffs equally affected Turkey, the only Muslim country in Europe.  Then there were the solar panel and washing machine tariffs that affected mainly Malaysia and Thailand. India and Brazil have also been affected and now China and Mexico are reeling in anger over US president’s moves. These countries have equally retaliated with tariffs on American goods, triggering a trade war.

However, none of these countries can win the trade war sufficiently because on one hand, the largest share of the American GDP is driven by services, which are hard to set a tariff on. American parents While the Trump tariffs will create significant holes in their economies, their retaliation may be immaterial to the US.  Secondly, most of the companies driving production in these countries are either fully owned or majority-owned by American parents. Thus it is more of an American trade civil war, which could be resolved in a Trump-owned golf course in Los Angeles or California. Perhaps the biggest concern for Trump is politics. First, he has an election to win in 2020. He has no time for a long drawn gorilla battle, something the Chinese communist party is well known for. Secondly, his policies are isolating America. Alone, these countries are no match for him, but together, they are unbeatable. This experimental protectionist policy needs time to implement. Politics is a delicate balance of advancing ones interests while not losing sight of the masses needs. America is doing a good job of the former, but losing the grip of the latter. We may yet have the oriental dragon as the next superpower. But the good news is that politically, the US will need political allies to allay fears of isolation. Usually, the natural target for extras in the global political opera in Africa. So far, no tariffs have been introduced in the traditional goods from Africa. Trump’s policy for Africa sounded like a jealous love letter from a married boyfriend. Either way, as the ‘lions’ lock horns over resources, the developing world, Africa included will benefit significantly. With the traditional markets locked, equipment and machinery will reach Africa more affordably. -The writer is the CEO of Elim Capital Ltd