Where Uhuru will splash budget billions 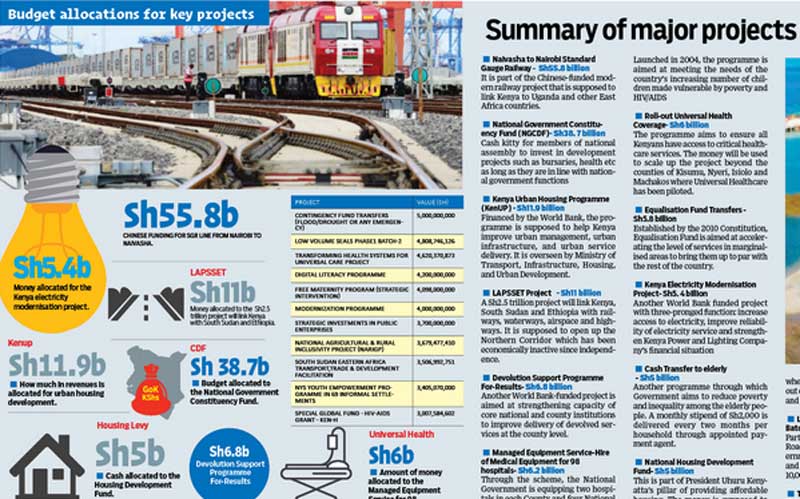 President Uhuru Kenyatta’s Sh410 billion kitty for development spending will include some of the projects that have been laced with controversy, including allocating Sh5 billion to the Housing Development Fund which is entangled in legal and logistical hurdles.

In the Financial Year starting July 1, the Government will try to breathe life into the President’s Big Four Agenda, a development plan that some critics have deemed amorphous and over-ambitious, with some still at feasibility stage with less than four years to their due date.

The Government will continue its relentless implementation of the National Integrated Management System (NIIMS) in which every Kenyan citizen will be given a unique code known as Huduma Number.

The Interior Ministry has been allocated Sh2 billion to continue implementing NIIMS, despite fears from a section of the public that the Government might use the code to create an Orwellian-like society where the State knows everything a citizen is doing or even thinking.

Despite shifting to a people-centred development budget in which most of the cash will be pumped into housing, food security, job creation, and affordable housing, and debt-financed transport and infrastructure projects will still attract the most cash.

The Big Four Agenda is expected to be executed through a Public Private Partnership, with the State contributing little cash. And China, which will neither finance Big Four Agenda nor give Kenya grants, will extend the most cash to transport.

China, the main financier of the SGR and which is reported to have withheld funds for the extension of the SGR to Kisumu, will finance the construction of the Nairobi-Naivasha leg of the track to the tune of Sh55.8 billion.

The money will help push up Cabinet Secretary James Macharia’s Transport, Infrastructure, and Housing’s coffers to a massive Sh111.7 billion, about a third of the total development budget.

But despite its deep pockets and growing influence on the country’s public finance landscape, China will not be the main financier of Kenya’s development budget in the upcoming financial calendar.

Instead, the single largest financier of the country’s development budget is the US-based World Bank which has committed to giving Sh100 billion in both loans and grants.

The World Bank’s cash will be distributed to different State agencies, including health, devolution, education, agriculture, housing, and infrastructure.

The State Department for Housing and Urban Development will be the main beneficiary of World Bank’s cash with the global lender committing to extend loans of up to Sh16.5 billion to the government agency.

President Kenyatta, it seems, is hell-bent on seeing through his Big Four Agenda which some critics have termed as “over-ambitious.”

The affordable housing project (AHP) has been allocated Sh5 billion, even as employers and workers continue to protest the 1.5 per cent deduction towards the Fund.

The money will be used in the establishment and operationalisation of the Kenya Mortgage Refinance Corporation (KMRC), a largely private sector-owned and non-deposit taking a financial institution, from which Kenyans will access subsidised mortgage.

Other once-controversial projects that have been allocated funds in the next financial year include leasing of medical equipment to two hospitals in every county and four national referral hospitals.

Technically known as the Managed Equipment Service (MES) programme, it has been allocated Sh6.2 billion in the Financial Year starting July 2019.

Thwake Dam, which some critics opposed citing environmental concerns, has been allocated Sh1.9 billion for the construction of the phase of the project.

And after years of dithering, the Jubilee Government has finally allocated Sh1.5 billion for the construction of labs for the digital literacy programme.

This is in addition to the continuation of the Digital Literacy Programme which received Sh4.2 billion.

For long the Government had brushed off suggestions that it shelves its hyped plans of distributing laptops to class one pupils. But now, it seems Jubilee has turned full circle to embrace what it was running away from.

Coffee farmers, whose debts have perennially been waived by State, will once again benefit from another Sh3 billion kitty. Known as Cherry Coffee Revolving fund, the kitty was established in March by President Kenyatta.

“All coffee farmers across the country will access the cherry advance at a modest interest rate of three per cent,” said the President when he opened the 124th session of the International Coffee Council at the Kenyatta International Convention Centre recently.

On the budget agenda, about 13 projects will each be expected to absorb at least Sh5 billion by June 2020.

The money is for support of projects mainly education, health, agriculture, roads, security, environment, and sport.

The World Bank’s initiative to support devolution under the Devolution Support Programme For-Results has been allocated Sh6.8 billion while Cash Transfer for orphans and vulnerable children has been given Sh6.2 billion.

To roll out universal health coverage, the State will spend Sh6 billion while poor counties will share amongst themselves Sh5.7 billion aimed at bringing them at par with their richer counterparts.

Treasury has also set aside Sh5 billion for emergency, including flood or drought.

World Bank seeks review of Kenya healthcare financing
Business
By Graham Kajilwa
23 hours ago
Elections should not cause unease, economic uncertainty
Opinion
By Tobias Alando
23 hours ago
Interact and socialise beyond work; you need it
Business
By Peter Theuri
23 hours ago
The treasury is broke to sustain the Sh100 unga subsidy, says Munya
Business
By Mike Kihaki
1 day ago
Premium How to make money from video games
Sci & Tech
By Boniface Mithika
1 day ago
.