NAIROBI, KENYA: Multiple sim card has driven up Kenya’s mobile penetration by over 100 per cent, a new report by Communications Authority of Kenya states.

During the October-December 2018 period, the number of active mobile subscriptions in the country grew by 6.2 per cent from the previous quarter to stand at 49.5 million translating to a penetration level of 106.2 per cent.

The penetration level of more than 100 per cent is attributed to the multiple SIM cards ownership in the country.

Further, the Kenya Integrated Household Budget Survey (KIHBS) report published by the Kenya National Bureau of Statistics (KNBS) in 2018 indicated that at least 30 per cent of Kenyans owned more than one SIM card. 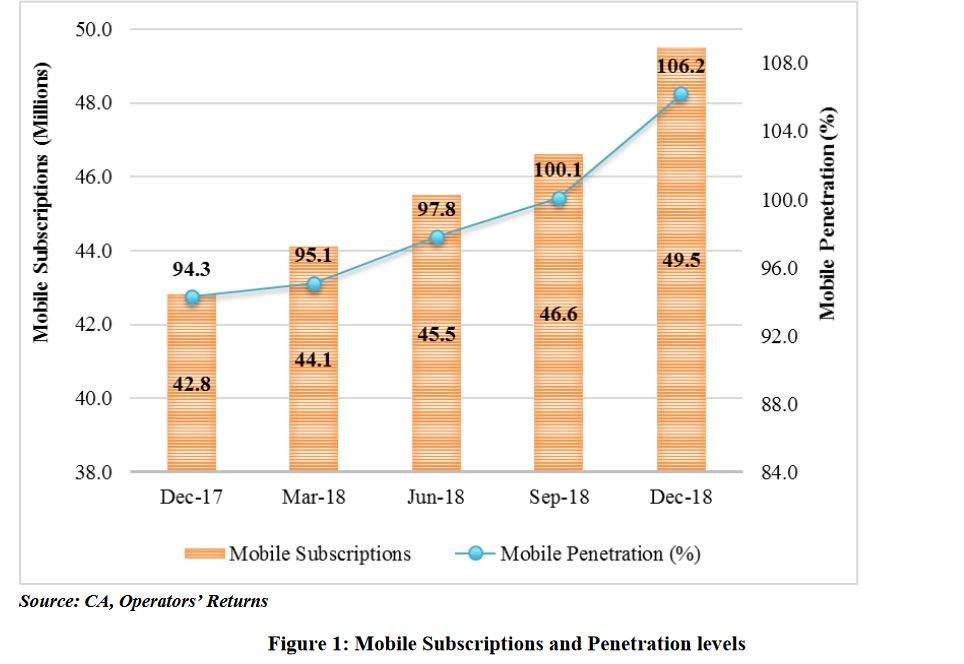 There wereover2.8 million net additions in mobile subscriptions in the quarter. The substantial increase could be attributed to SafaricomPLC running a campaign dubbed Safaricom @ 18 promotion to its customers during the period under review.

During the quarter under review, mobile voice traffic originating and terminating on the same network grew by 2.0 per cent to register 12.9 billion minutes from 12.6 billion minutes reported in the previous quarter.

Mobile voice traffic terminating to fixed networks dropped by 2.6 per cent to record 13.9 million minutes during the period under review.

The total mobile voice traffic recorded by Safaricom PLC during the second quarter increased to 9.5 billion minutes from 8.9 billion minutes reported in the first quarter.

Consequently, its voice market share rose by 2.1 per centage points to 64.3 per cent. The increase is attributed to Safaricom @ 18 promotion offered by the operator to its customers during the quarter.

The promotion enabled the Safaricom subscribers to make calls for as low as one shilling per minute for 18 minutes for both on the net and off the net.

Airtel Networks Limited reported a drop of 5.6 per cent in total mobile voice traffic from 4.7billion minutes to 4.5 billion minutes during the period under review.

As a result, its mobile voice market share declined by 2.6 per centage points to 30.7 per cent.

The total local mobile voice traffic for Telkom Kenya Limited increased to 706.5 million minutes from 619.3 million minutes reported in the first quarter. This increase could be attributed to “Telkom Free Zones campaign”promotion, which allowed its pre-paid customers to enjoy free on-net calls in some targeted regions across the county.

The total outgoing local mobile voice traffic recorded by Finserve Africa Limited declined during the review period to post 35.2 million minutes from 38.2 million minutes registered in the preceding quarter. Mobile Pay Limited registered a total of 29,961 minutes during the quarter compared to29,482 minutes recorded in the previous quarter. The traffic volumes per service provider and their respective market shares.

Why SACCOs need to go digital