The rising impunity by those in public service who are expected to safeguard our resources and provide services with utmost humility, accountability and integrity has eroded public confidence. The growing anxiety is fueled by pervasive mega corruption and apparent indifference by those we elected to rule over us. Corruption exists in every society but in varying degrees. What irks Kenyans is the brazen plunder and looting of public coffers, the frequency with which it occurs, the sheer amounts of funds involved, and the impunity with which those implicated are often unwilling to take responsibility. Worse still, most get a slap on the wrist for the vice, if at all!

The Kanu administration was bundled out of power because of corruption. It had reached dangerous proportions and Kenyans simply stood up to vote it out. The electoral process is an exercise in vertical accountability that citizens can exercise when their elected leaders fail the accountability test. The Jubilee administration should be worried. The talk of a super alliance may just get the impetus it needs by coalescing around this issue as the Narc team did. Corruption thrives where there is limited or no accountability.

Public servants are accountable to those elected to represent the citizens. Where both the public servants and the elected representatives are not accountable, the result is impunity as is the case in our country. As I opined last week, the public watchdog institutions responsible for horizontal accountability have largely been rendered ineffective due to lack of capacity, intimidation and interference by the Executive.

If there is political will to eliminate corruption by the Executive, this war can be won. The President should start by empowering these watchdog institutions and standing by them. Support the Auditor General, DPP, EACC and Controller of Budget at all times. He should not support his officers when there are allegations of corruption. Instead, he should come out in public to express his concern and indignation, and demand answers from those responsible for the docket, in public. Why must the President remain mum on the Health ministry expose, for instance? It is essential that his officers accept political responsibility for scams in their dockets and bow out. Alternatively, he must force resignation, or fire officers, and not wait for their benevolence in offering to step aside.

The President should also encourage transparency by his government. Disclosure of information as provided for in the Constitution was not by chance. It was meant to enhance transparency and reduce avenues for corruption. Similarly, public participation was anchored in our Constitution to enhance transparency so that the citizens can interrogate public policies, value for money decisions and hold their government to account. We may think these interventions delay execution of public projects and policies but they are intended to limited corruption.

The media and the civil society too play a great role in the fight against corruption. This administration has been decidedly against the civil society and have treated them with utter disdain. Yet, they are essential in enhancing government accountability, and in creating awareness among the citizens through empowerment. Similarly, research has shown that nations with greater freedom for the media have higher successes in the corruption war. Commitment by the President to the war against graft requires that he ropes in those two institutions as his partners.

Once again, I reiterate that Parliament and County Assemblies be allowed to exercise their independence in holding the Executive to account. In recent years, committee reports of the Houses have been thrown out at plenary level because of tyranny of numbers on the orders of the Executive. As the old adage goes, where there is a will, there is a way! These systems of accountability should increase the pressure for more transparent governance to make it more difficult for corruption to survive. 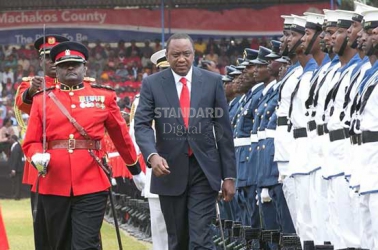