Borrowing too much too fast? Africa’s growing debt challenge

By Jocelyne Sambira | 5 years ago

Borrowing too much too fast? Africa’s growing debt challenge 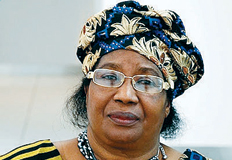 “If you want to be influential in the political arena, you need to influence policy,” Ms Betty Murungi, a social justice advocate, recently told female entrepreneurs and corporate managers in Nairobi.