Iran intensified its crackdown Tuesday on protests stemming from the death of a 22-year-old woman who authorities claim had been detained by the morality police for failing to properly wear a hijab to cover her hair, with social media showing authorities sending tanks to the Kurdish region to quell unrest at the center of the demonstrations.

Riot police fired into one neighborhood in Sanandai, the capital of Iran’s Kurdistan province, 400 kilometers west of the Iranian capital, Tehran. A Kurdish group called the Hengaw Organization for Human Rights posted a video showing darkened streets with apparent gunfire going off and a bonfire burning.

Protests continued elsewhere in Iran as well, with videos Monday in capital city Tehran showing some women and girls marching through the streets without headscarves.

The protests against the death of Mahsa Amini, now in their fourth week, represent one of the biggest challenges to Iran's theocracy since the 2009 Green Movement protests. Some oil workers Monday joined the protests at two key refinery complexes, for the first time linking an industry that is key to the theocracy to the unrest.

Amini was Kurdish and demonstrations against her death began in Iran's Kurdish region on September 17 at her funeral there, after her death the day before.

Iran has not acknowledged the renewed crackdown in Sanandaj, but Iran's foreign ministry summoned the British ambassador after Britain sanctioned members of Iran's morality police and security officials involved in the crackdown.

Iran's Foreign Ministry called the sanctions "arbitrary and baseless," and it threatened to potentially take countermeasures against London.

"These protestors are Iranian citizens, led by women and girls, demanding dignity and basic rights," Sullivan wrote on Twitter. "We stand with them, and we will hold responsible those using violence in a vain effort to silence their voices."

An Oslo-based group, Iran Human Rights, estimates that at least 185 people have been killed during the protests and thousands have been arrested. This includes an estimated 90 people killed by security forces in the eastern Iranian city of Zahedan amid demonstrations against a police officer accused of rape in a separate case. The government says more than 20 members of its security forces have been killed.

Among those arrested in the crackdown was Faezeh Hashemi Rafsanjani, daughter of late former Iranian President Akbar Hashemi Rafsanjani. The judiciary said Tuesday she has been charged with "disruption of public order and propaganda against the Islamic republic." 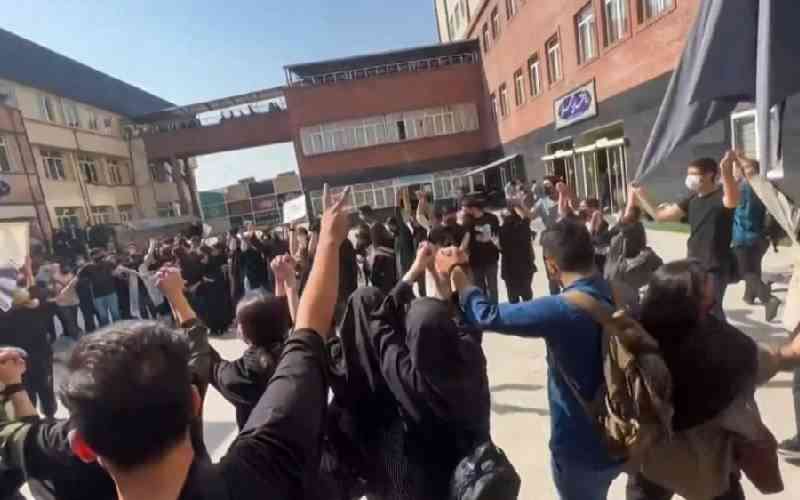