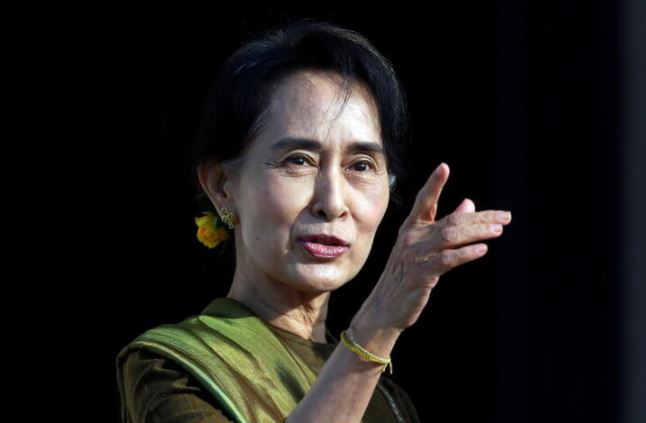 Myanmar’s military seized power on Monday in a coup against the democratically elected government of Nobel laureate Aung San Suu Kyi (pictured), who was detained along with other leaders of her National League for Democracy (NLD) party in early morning raids.

The army said it had carried out the detentions in response to “election fraud”, handing power to military chief Min Aung Hlaing and imposing a state of emergency for one year, according to a statement on a military-owned television station.

A verified Facebook page for Suu Kyi’s party published comments it said had been written in anticipation of a coup and which quoted her as saying people should protest against the military takeover.

The coup derails years of Western-backed efforts to establish democracy in Myanmar, also known as Burma, where neighbouring China also has a powerful influence.

Myanmar junta cuts internet, protesters say they will not surrender

Myanmar's turmoil and its key historical connection to Kenya

The generals made their move hours before parliament had been due to sit for the first time since the NLD’s landslide win in a Nov. 8 general election viewed as a referendum on Suu Kyi’s fledgling democratic rule.

Phone and internet connections in the capital, Naypyitaw, and the main commercial centre of Yangon were disrupted and state television went off air after the NLD leaders were detained.

Suu Kyi, President Win Myint and other NLD leaders were “taken” in the early hours of the morning, NLD spokesman Myo Nyunt told Reuters by phone. Reuters was subsequently unable to contact him.

A video posted to Facebook by one MP appeared to show the arrest of another, regional lawmaker Pa Pa Han.

In the video, her husband pleads with men in military garb standing outside the gate. A young child can be seen clinging to his chest and wailing.

Troops and riot police stood by in Yangon where residents rushed to markets to stock up on supplies and others lined up at ATMs to withdraw cash. Banks subsequently suspended services due to poor internet connections.

The detentions came after days of escalating tension between the civilian government and the military in the aftermath of the election.

Suu Kyi’s party won 83 per cent of the vote in only the second election since a military junta agreed to share power in 2011.

The pre-written statement uploaded on an NLD Facebook page quoted Suu Kyi as saying such army actions would put Myanmar “back under a dictatorship”.

“I urge people not to accept this, to respond and wholeheartedly to protest against the coup by the military,” it quoted her as saying. Reuters was unable to reach any NLD officials to confirm the veracity of the statement.

Supporters of the military celebrated the coup, parading through Yangon in pickup trucks and waving national flags but democracy activists were horrified.

“Our country was a bird that was just learning to fly. Now the army broke our wings,” student activist Si Thu Tun said.

“The NLD is the government we voted for. If they’re unhappy with the result, they can call another election. A coup isn’t acceptable,” said one woman, who declined to be identified, whose husband works for the military.

Senior NLD leader Win Htein said in a Facebook post the army chief’s takeover demonstrated his ambition rather than concern for the country.

Condemnation of the coup came from Australia, Britain, the European Union, India, Japan, Malaysia, Singapore and the United States. China called on all sides to respect the constitution and uphold stability.

The White House said President Joe Biden had been briefed on the arrests, while the U.S. embassy in Yangon issued an alert warning U.S. citizens there of the “potential for civil and political unrest”.

“The United States stands with the people of Burma in their aspirations for democracy, freedom, peace, and development. The military must reverse these actions immediately,” U.S. Secretary of State Antony Blinken said in a statement.

British Prime Minister Boris Johnson condemned the coup and the imprisonment of Aung San Suu Kyi and others.

“The vote of the people must be respected and civilian leaders released,” he said on Twitter.

U.N. Secretary-General Antonio Guterres condemned the detentions and urged the military to respect the will of the people, a spokesman said.

European Council President Charles Michel said all those detained must be released and the outcome of the election respected.

Japan said it had long supported democracy in Myanmar and opposed any reversal of that process. It also called for the release of Suu Kyi and others.

Nobel Peace Prize winner Suu Kyi, 75, came to power after a 2015 election win that followed decades of house arrest and struggle against the military, which seized power in a 1962 coup and stamped out all dissent for decades.

While still hugely popular at home, her international reputation was damaged after she failed to stop the forced expulsion of hundreds of thousands of ethnic Rohingya Muslims in 2017.

The November vote faced some criticism in the West for disenfranchising some ethnic groups including Rohingya but the election commission rejected military complaints of fraud.

In its statement declaring the emergency, the military cited the failure of the commission to address complaints over voter lists, its refusal to agree to postpone new parliamentary sessions and protests by groups unhappy with the vote.

“Unless this problem is resolved, it will obstruct the path to democracy and it must therefore be resolved according to the law,” the military said, citing an emergency provision in the constitution in the event sovereignty is threatened.

Daniel Russel, the top U.S. diplomat for East Asia under former President Barack Obama, who fostered close ties with Suu Kyi, described the takeover as a blow to democracy in the region.

“It’s yet another reminder that the extended absence of credible and steady U.S. engagement in the region has emboldened anti-democratic forces,” he said.

Human Rights Watch’s Asia advocacy director John Sifton, criticised the initial White House response as “disappointingly weak” and urged a more concerted international reaction “to put the Myanmar military on notice of the specific consequences that will occur if their coup is not reversed”.

In what is the opposite of what football fans are used to reading, Cristiano Ronaldo had one of his famous records broken last week.

The conditions restricting Gicheru's liberty include providing financial security of Sh1,000,000 to the ICC Registrar.