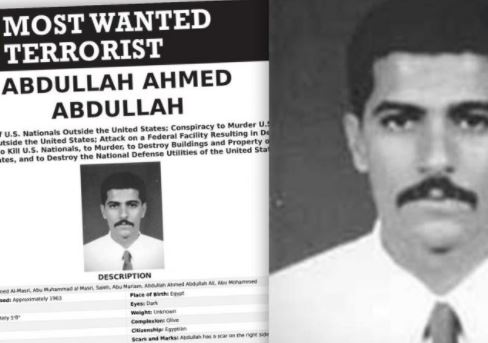 One of the men behind the terror attack at the US embassies in Nairobi and Dar es Salaam 22 years ago was killed in Iran three months ago.

Abdullah Ahmed Abdullah (pictured) was Al Qaeda’s second in command and accused of being one of the masterminds behind the August 8, 1998 bomb blast that killed 224 people, including 12 Americans, and injured more than 5,000 people.

Abdullah, who was also going by the alias Abu Muhammad al-Masri, was gunned down in Tehran, the capital of Iran on August 7 this year.

According to the New York Times, the terror suspect was killed together with his daughter, Miriam, the widow of Osama bin Laden’s son Hamza bin Laden, the report said, citing unnamed intelligence officials.

Abdullah was also suspected to have ordered the attack at Paradise Hotel in Kikambala on November 28, 2002 that killed 13 Kenyans and three Israeli tourists.

Intelligence officials who confirmed the death of the terrorist on FBI’s most wanted men, say he was killed by Israeli operatives.

But Iran yesterday rejected the claims that the top al-Qaeda figure was killed in Tehran, warning the US media of falling for “Hollywood-style scenario-making” by US and Israeli officials.

In a statement, Foreign Ministry spokesman Saeed Khatibzadeh said the “terrorist” group was formed as a result of failed American policies in the region.

“In order to dodge responsibility for the criminal activities of this group and other terrorist groups in the region, Washington and Tel Aviv from time to time try to paint Iran as being tied to these groups through weaving lies and leaking fabricated information to the media,” he said.

The killing had gone unacknowledged by the US, which had been tracking Abdullah and other Al-Qaeda leaders.

Reports indicate he was killed by two motorcycle gunmen who fired five shots into his car from a pistol fitted with a silencer.

The Egyptian born Abdullah was said to be a close associate of Bin Laden’s and served as head of the organisation’s operations section.

He was born in northern Egypt in 1963 and played in the country’s top football league before he joined the Afghan jihadist movement to fight the Soviet invasion of Afghanistan in 1979.

Unable to return to Egypt after the end of the Afghan war in 1989, he remained in Afghanistan where he eventually joined Bin Laden.

The US had also documented Abdullah’s travels in Africa, initially with Laden to Khartoum, Sudan, in the early 1990s where he began forming military cells.

He also went to Somalia and is reported to have trained Somali fighters.

America is in a state of flux, driven by innovations, immigrants and cities where ideas fight, with the fittest surviving.

By Agencies | 5 days ago

Protests outside Chinese embassy in UK over Beijing's treatment of Uyghurs
.