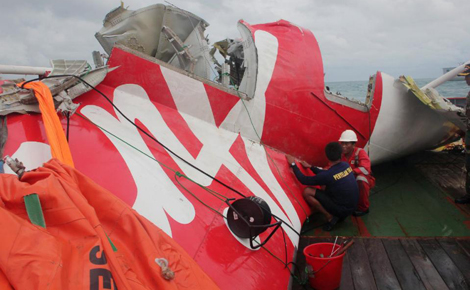 Warning alarms in AirAsia flight QZ8501 were "screaming" as the pilots desperately tried to stabilise the plane just before it plunged into the Java Sea last month, a crash investigator said Wednesday.

The noise of several alarms -- including one that indicated the plane was stalling -- can be heard going off in recordings from the black box in the Airbus A320-200's cockpit, the investigator told AFP, requesting anonymity.

"The warning alarms, we can say, were screaming, while in the background they (the pilot and co-pilot) were busy trying to recover," the investigator said, adding the warnings were going off "for some time".

The investigator, from Indonesia's National Transportation Safety Committee (NTSC), added that the pilots' voices were drowned out by the sound of the alarms.

The revelation came a day after Indonesian Transport Minister Ignasius Jonan said that the plane had climbed abnormally fast before stalling and plunging into the sea, as it flew on December 28 in stormy weather from Indonesia's Surabaya to Singapore with 162 people on board.

"In the final minutes, the plane climbed at a speed which was beyond normal," the minister told reporters.

Analysts said the AirAsia jet's rapid ascent had echoes of the crash of an Air France jet into the Atlantic in 2009, with the loss of 228 lives.

Air France flight 447 vanished en route from Rio to Paris at night during a storm. The Airbus A330's speed sensors were found to have malfunctioned, and the plane climbed too steeply, causing it to stall.

The investigation into AF447 found that both technical and human error were to blame.

As with the AirAsia disaster, the accident happened in an area around the equator where north and south winds meet, and thunderstorms are common.

So far, just 53 bodies have been recovered following the AirAsia crash.

Divers have been struggling for a week against rough seas and strong currents to reach the plane's main body, which was spotted on the seabed and is thought to contain the bulk of the remaining passengers and crew.

The two black boxes -- the cockpit voice recorder and the flight data recorder -- were recovered last week after a lengthy search, and investigators are examining them.

Investigators have listened to the data from the cockpit voice recorder, and are also looking at a wealth of information from the flight data recorder, which monitors every major part of the plane.

They are focusing on the possibility of human or aircraft error, after ruling out terrorism following an analysis of the cockpit voice recorder.

Committee head Tatang Kurniadi said that the preliminary report into the crash would be completed next week, a month after the accident. He said the full report would not be released publicly but the media would be told some of its contents.

There was a huge international hunt for the crashed plane, involving ships from several countries including the US and China.

All but seven of those on board the flight were Indonesian. The foreign nationals were from South Korea, Singapore, Malaysia, Britain and France.