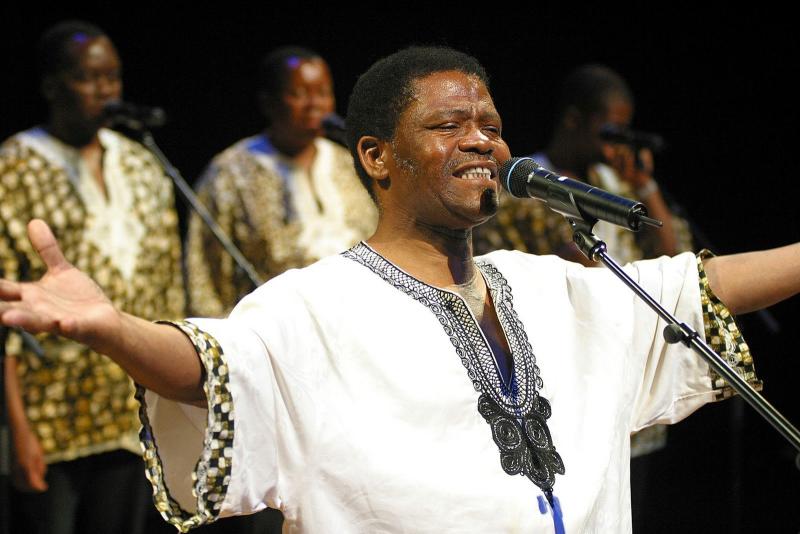 When Joseph Bhekizizwe Shabalala died, I stopped in my tracks and just let the sadness pull me down. And then inspiration from his beacon of a life lifted me back up.

Shabalala’s own response to the devastating murder of his wife Nellie in 2002 was the transcendently uplifting album by his ensemble Ladysmith Black Mambazo called Raise Your Spirit Higher. It won a Grammy in 2003.

What is our response to the great artistic and spiritual hole his loss has left in South Africa? The journalistic tributes have poured in from all over, both at home and abroad. This saves me the labour of reviewing the innumerable highlights of Shabalala’s extraordinary shooting star of a life and career. What does remain for us academic tortoises waddling after the journalist hares is to meditate on the quality and character of his unique personhood and achievement, and their meaning for South Africa and indeed the world.

To start from the beginning, Shabalala’s parents were not simply tenant farmers in the district of Ladysmith, KwaZulu-Natal, but more significantly Zulu spiritual diviners and herbal doctors.

The religious approach of physical and psychological healing as a single unified medical system was inculcated from birth, along with the intense outpouring of singing, drumming and dancing such treatment requires.

This is important when we consider the role of dreams in Shabalala’s creative autobiography. Dreams are a vital source of inspiration and communication from the netherworld in indigenous southern African religion.

Their power carries over into African Christianity, which Shabalala took up devoutly after the early success of Ladysmith Black Mambazo in the 1970s. “The Church of Christ the Dreamer” as playwright and author Athol Fugard called it in his novel Tsotsi.

Shabalala’s dream of a choir of children singing “in perfect harmony” proved formative in his ensemble’s career. For the rest of his life he dreamt of new songs, new arrangements, techniques, and disciplines that the group developed and performed on stage. Directed by dreams, he was a formidable, uncompromising taskmaster in rehearsal. This submission to the spirit of musical harmony in dreams helps to explain the secret of Ladysmith Black Mambazo’s success.

Regardless of their highly localised genre, they were just so good, and the global audience was absolutely enchanted. I recall listening to them at New York’s cavernous Carnegie Hall in 1988. For three uninterrupted hours, using only their voices and synchronous choreography, they kept the audience spellbound at the edge of their seats in awed, worshipful silence.

The Africanisation of Christianity, audible in the group’s isicathamiya genre, produced a blend of Christian hymnody and isiZulu male polyphonic vocal traditions. This deep synthesis provided a bridge between Zulu and Western music that Shabalala crossed and re-crossed repeatedly by a variety of routes.

This explains in part the naturalness of his ability to collaborate with an astonishing range of American vocalists and composers, from Paul Simon to Stevie Wonder to Dolly Parton. Another part of the explanation was Shabalala’s overwhelming humanism and dedication to social as well as musical harmony, that touched everyone he encountered.

A second foundational theme in the life and work of Shabalala was the necessity of labour migration, which he was forced to undertake at a young age following the early death of his father. The hardships of the migrant labour system, which formed the econ omic foundation of racial capitalism and apartheid, later became a staple of his lyrical composition and landscape of feeling.

These hymns of the hardships of migrant labour – like the rock/maskanda of Johnny Clegg and Sipho Mchunu of Juluka who appeared with them on Ladysmith Black Mambazo’s first overseas tour in 1981 – mounted an implicit political challenge to the white minority government. It transgressed the boundaries of apartheid cultural ideology.

American audiences who enjoyed the stunning beauty and exotic perfection of Ladysmith Black Mambazo’s intricate vocal harmonies could hardly believe these were the same sort of people as the unarmed protesters that brutal South African police were shown beating, shooting and teargassing on the evening news.

Suddenly, as their song Homeless from the Graceland album prayerfully intimated, every black life in South Africa’s struggle was a real, human life, one whose loss ought to be prevented.

Of course, in reply to those English-speaking critics who believed they looked in vain for political consciousness in Ladysmith’s songs, Shabalala rightly pointed out that in isiZulu there are subtleties of reference that do not survive translation. And that during the struggle virtually all popular music was held to have a political valence in black communities because politics had become the implicit ground of social discourse.

Finally, Ladysmith’s appropriations of African-American hymnody and gospel are part of a tradition of ‘Black Atlantic’ political cross-fertilisation and aspiration. This receives perhaps its most notable expression in Nkosi Sikelel’ iAfrika, the anthem of the African National Congress that has become the first verse of the national anthem of South Africa.

Finally, we should pause to consider Shabalala as a kind of musical Nelson Mandela, at once a great talent and a great soul, who humanised South Africans, their troubles and their aspirations, for the world.

Yet he was above all a perfectionist, setting a standard by which our performing artists will continue to be judged by the world audience for a very long time. Phumula ngokuthula, lala ngoxolo mfowethu Bekhizizwe (Rest in peace Bhekizizwe). Because of you, the rest of us have work to do.

- The writer is professor Emeritus, Social Anthropology, University of the Witwatersrand. theconversation.com

The institutions’ bosses feel that merging universities may not be the main solution to the problems that they face.