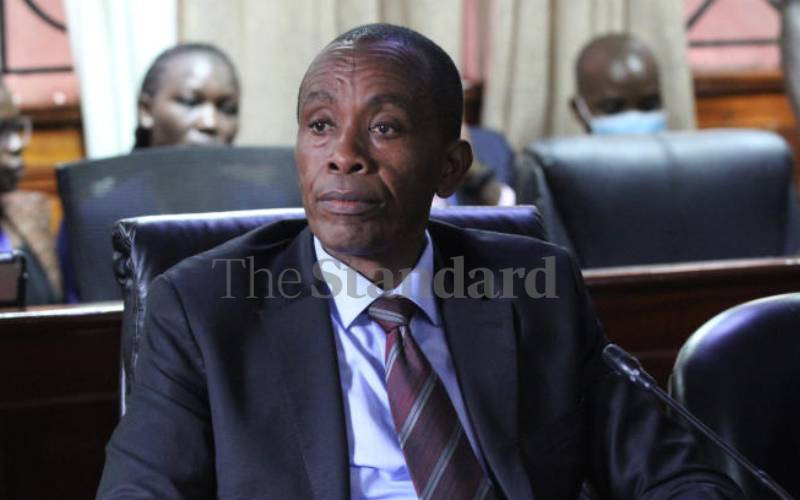 The governor is facing revolt from a section of MCAs who have rejected half of his cabinet nominees.

Wamatangi has also had run-ins with traders over allocation of stalls in the refurbished Githurai market in Ruiru.

He is facing pressure from casual workers who were laid off by the county government after he assumed office.

On Wednesday MCAs rejected five out of 10 cabinet nominees citing lack of experience and requisite qualifications.

The MCAs rejected the five county executive nominees despite the assembly's Committee on Appointments report approving all the 10 cabinet nominees as suitable to serve in their respective dockets.

In an interview on Thursday, Wamatangi downplayed the rift with the assembly saying he has been a champion of devolution and his administration will allow the MCAs to work independently.

“I am going to pick up from where the MCAs left in rejecting some of the nominees. I will also peruse through the report of the Committee on Appointments and make an informed choice on the way forward,” he said.

He regretted that Kiambu has been lagging behind in development for the last 10 years due to the constant wrangles between his predecessors and the MCAs, something that he wants to bring to an end.

Ms Kirumba, the Finance CEC nominee was rejected on grounds that she lacked the experience to manage Sh17 billion allocated to the county.

“Article 35 requires a Finance nominee to have five years of experience in public service. The nominee has said she has never worked in any public office and has no experience in finance management. She is neither a member of any accounting professional body,” said Tigoni-Ngecha MCA Kimani Ngaruiya in his contribution during the debate.

Ms Wainaina, the Housing and Physical Planning CEC nominee was dropped after Kijabe MCA Stephen Nyutu (UDA) objected to her nomination, saying she lacked knowledge on the housing docket.

Riabai MCA Hezron Mwangi (UDA) in opposing the Housing CEC nominee said she lacked the requisite experience to handle the docket in the wake of collapsing buildings.

Ms Riunge, the Public Administration CEC nominee, was rejected on grounds of age.

Wamatangi appears to be facing rebellion even from UDA lawmakers who are the majority in the assembly.

The ruling party has 46 MCAs out of 60 elected members, Tujibebe(4), Jubilee (4) Chama Cha Kazi (4) and two independents. The Kenya Kwanza lawmakers led the onslaught against the governor's nominees and lobbied to have them rejected.

Recently, Wamatangi found himself in unfamiliar territory after traders in the refurbished Githurai market in Ruiru took to the streets to protest over the allocation of stalls.

The traders accused Wamatangi’s administration of short changing them after they were asked to give way for the refurbishment of the market.

The dispute pitting two rival groups saw the market closed with a section claiming there was a plot to kick them out in favour of those friendly to the governor’s cronies.

Wamatangi moved in to assure the traders that the leadership of the markets will spearhead the allocation of stalls.

He said that to accommodate every trader, the county government will commission the construction of another market-the Githurai Two market. The project is expected to be commissioned by President William Ruto on December 13.

Hundreds of casual workers who were recently laid off by the county government have accused the governor of subjecting them to psychological and financial trauma.

The workers called on the president to intervene and have them reinstated saying their dismissal was inhumane and suspicious.

"The Kenya Kwanza administration talked of addressing unemployment and defending hustlers. We, therefore, wonder why we are being targeted and call upon the President to protect us,” said Agnes Wambui, one of the sacked casual labourers.

They claimed that they were laid off without notice and pay yet they had worked for many years at the devolved unit.

In the past three weeks, close to 600 casual workers have been sent home in what sources say is part of the county's austerity measures.

By Nzau Musau 19 mins ago
Premium Chebukati: This is my story

By Mercy Adhiambo 19 mins ago
Premium Inscrutable by choice, Magoha was generous and laughed a lot

By Patrick Muinde 19 mins ago
Premium Ethiopia, Angola zooming past Kenya: Time to wake up and smell the coffee
.