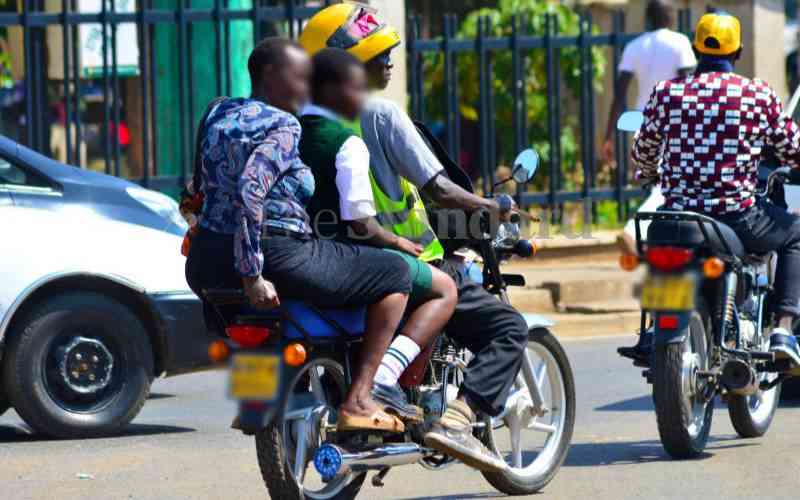 Earlier in the year, this column wrote on Italy’s scippatori, motorcycle thieves renowned for their ability to snatch purses and jewellery on the run. It warned that if no resolute action was taken against Nairobi’s boda boda menace, the Kenyan version of scippatori would be coming to a street near you. It seems the warning was ominously prescient and now hue and cry has arisen after a spate of thefts and muggings attributed to motorcycle gangs.

When the former Internal Security Cabinet Secretary (CS) publicly upbraided boda boda riders for acts of lawlessness, there was a collective sigh of relief. And the resultant crackdown on errant riders was hailed as a turning point of sorts. But pessimists pointed to the nexus between the boda boda harassment of a female diplomat and a visiting head of State from her home country. And they may have been right. The crackdown only lasted the duration of the State visit.

It seems the Nairobi County leadership has crafted its bikers’ policy along the same politically expedient lines. One of Governor Johnson Sakaja’s first pronouncements was to decree that boda boda riders, previously restricted to the outskirts, would now have unfettered access to the city centre. The result of this experiment in liberality has been chaos. Evidently, boda boda riders have a visceral apathy for law and order.

Internal Security CS Kithure Kindiki has weighed in on the matter. He has promised that stern action will be taken against miscreants within Nairobi. He has correctly identified some unemployed youths as being behind knife attacks and other forms of muggings. He has further refuted claims that the Kenya Police Service officers are on a go-slow, saying that they are doing their best under difficult circumstances.

This column takes the view that even as police officers operate in extremis, there can be no excuse whatsoever for turning a blind eye to egregious breaches of the law. For instance, traffic officers stand by watching as boda boda riders jump traffic lights, ride on the wrong side of the street and overtake from the blind left. They also routinely cycle on pavements and walkways, making movement within Nairobi an extreme sport.

World over, city centres are considered sacrosanct safe spaces with motoring traffic deliberately curtailed to allow free flow of pedestrian movement. Cities like London even have punitive charges for those who want to access the centre by private car. Nairobi cannot and must not be allowed to degenerate into a muggers paradise.

Felonies and misdemeanours should not flourish under the quiescent eyes of indifferent and venal police officers. The nation’s premier capital has so much riding on its reputation as a beautiful and safe place to visit and do business.

Further, it is deeply unsettling to see human viscera scattered all over the roads when riders, who imagine themselves invincible are run over by cars and trucks. The needless loss of life and the attendant suffering of those who have lost relatives through accidents cannot be quantified.

One rather hopes that for once, political rhetoric will translate into action points; that CS Kindiki’s tough talk will, forthwith, put a stop to the degeneration of Nairobi’s city centre.

On a different note, the short rains are now here. The Kenya Kwanza administration has made food security a central pillar. True to his word, President William Ruto has made available cheap fertiliser. The next logical step would be to engage in a massive nationwide dam-building campaign to move the country away from rain-fed agriculture.

Food self-sufficiency is the new gold. Kenya’s neighbours, previously a source of cheap maize, are now exporting the staple to the Middle and Far East where demand for grain for animal feed is high and prices better. With a global food shortage looming, diplomacy, and the positioning of a country on the world stage may be based on its ability to feed itself and still have surplus for export. Kenya’s journey to that end starts now.

By Nzau Musau 16 mins ago
Premium Chebukati: This is my story

By Mercy Adhiambo 16 mins ago
Premium Inscrutable by choice, Magoha was generous and laughed a lot

By Patrick Muinde 21 mins ago
Premium Ethiopia, Angola zooming past Kenya: Time to wake up and smell the coffee
.