By Ibrahim Adan Ali | 3mos ago 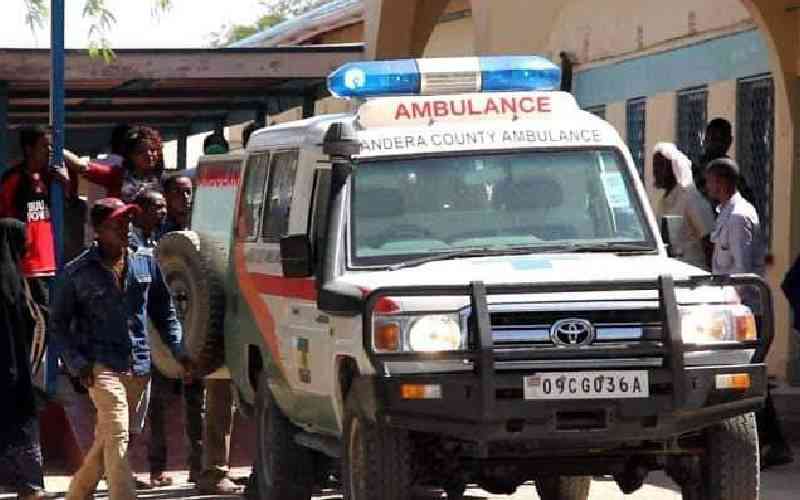 An Ambulance vehicle belonging to the Mandera County government has been carjacked by suspected Alshabaab militants.

The ambulance that's attached to Lafey health centre was hijacked together with four occupants while transporting a patient to the Elwak Referral Hospital.

Those who were on board are a paramedic, the Ambulance driver, a patient and one of his relatives, their whereabouts remain unknown.

While confirming the missing Ambulance together with its occupants Fatima Noor, head of ambulance services said that investigations into the matter had begun and that she could not comment adding that security services are better placed.

The vehicle was ambushed at Kurkura village near Elwak along Lafey road.

The incident that happened on Tuesday 6pm was shared with The Standard by a health officer attached to Lafey health centre who's not authorized to speak to the media.

Member of Parliament for Lafey Constituency Mohamed Abdiker has condemned the incident and asked the government to follow it up immediately and also restore peace and order in the area.

“We cannot accept Alshabab to be ruling over our people and intercept an ambulance that provides emergency services. I demand that the police follow it up and return the ambulance to Lafey,” Said Abdiker on the phone.

Premium Tax matters are private, please stop discussing them in public
Opinion
By Vincent Ongore
38 mins ago
You can cash in by observing, predicting human behaviour
Enterprise
By XN Iraki
2 hrs ago
Climate change turning herders into traders
Enterprise
By Macharia Kamau
2 hrs ago
Premium Kenya Power bets on electric vehicles to increase demand for energy
Business
By Macharia Kamau
2 hrs ago
.

By Harold Odhiambo 2 hrs ago
Premium Ruto steps up charm offensive in Nyanza
.