By Muriithi Mugo | 7mos ago

The bodaboda operators were protesting harassment by police as well as against Muguka traders in the area who they accused of abetting motorcycle theft.

Sources told The Standard that the fire could have emanated from a tear gas canister lobbed by police as they sought to disperse the protestors.

Nicholas Kamau one of the traders said he had lost property worth Sh200,000.

"I had just stocked my workshop and everything has gone up in the flames,” said Kamau.

Another trader Belas Ndiri said she had lost goods worth Sh300,000 adding that the Fire engine had arrived without enough water.

The operators had in the morning stormed the Embu police station after two of their colleagues were arrested while others retreated to cause chaos in town.

One of the operators said police demanded for a bribe of Sh15,000 for the two riders to secure their freedom.

A security meeting held between the Muguka traders and Boda operators did not bear fruits.

Embu West Deputy County Commissioner Mercy Gatobu warned that those who engage in crimes would face the law accordingly.

“Kindly provide us with information and let us follow the law strictly to avoid unnecessary confrontation with the law enforcers,” she said. 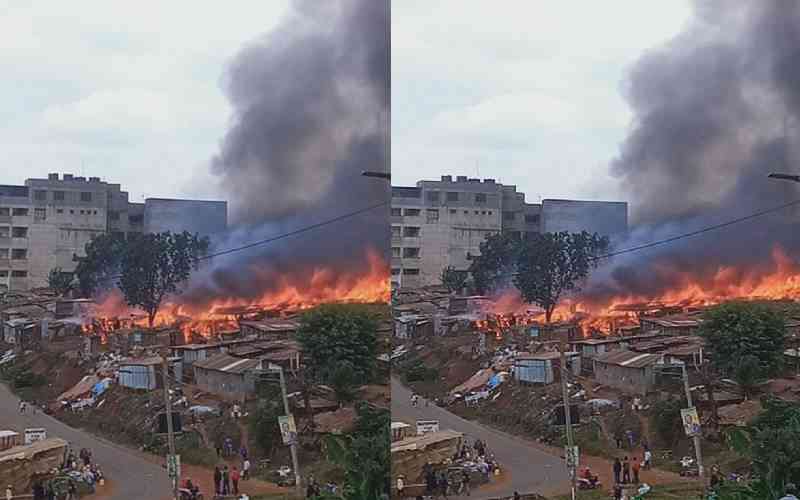 Meanwhile, a county fire engine that responded to the fire incident was pelted with stones forcing the driver to speed off from the scene with perforated tyres.

Sub-County Police Commander Agnes Magiri declined to speak to the media over the matter.

A police vehicle belonging to the Sub-County police commander was also pelted with stones.

The operators have also accused police of arbitrary arresting them despite the yesterday meeting convened by Mercy Gatobu at the DCC Embu West.

In retaliation, the riders burned down Muguka trading kiosks as they played hide and seek games with the police.

They lit bonfires and blocked the busy Embu - Meru Highway before police dispersed them.

Collins Nyaga the MCA Kirimari ward called for tolerance between the two groups.

He faulted the police for arresting the bodaboda operators who do not have number plates adding that they should give them time to sort out some of the issues.

“I know some may lack number plates as their motorcycles are new and these are issues that can be sorted out without using force,” Nyaga noted.

Premium Jobless Kenyan graduates troop to Finland to do technical courses
Education
By Stephen Rutto
1 hr ago
Mining firm sponsors 24 youths to acquire vital technical skills
Education
By Philip Mwakio
2 hrs ago
Let clergy advance Pope Francis agenda and take it up with Ruto
Opinion
By Gabriel Dolan
2 hrs ago
Why it's time for youth-led rural resurgence
Opinion
By Mark Oloo
2 hrs ago
.

By Ken Opalo 2 hrs ago
Premium We can't tax our way out of the economic slump
.