Evans Kidero: I will improve roads to boost sugarcane farming 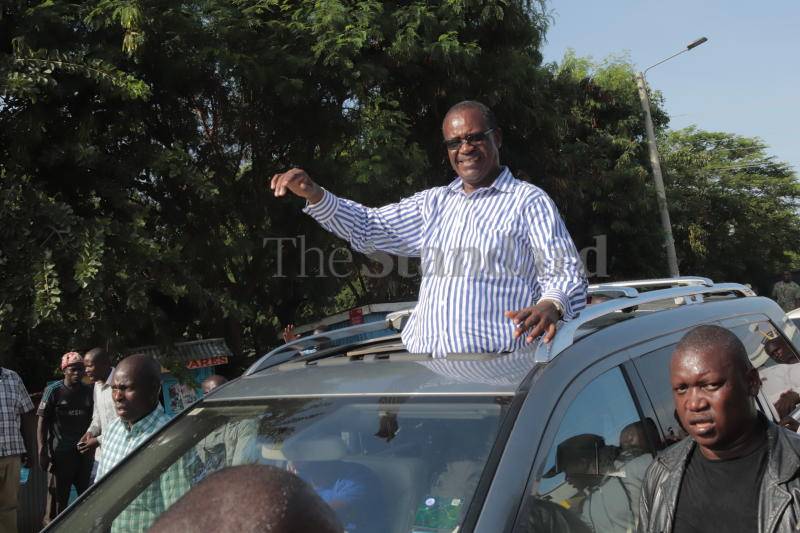 This comes amid complaints by farmers that their sugarcane dries on farms due to dilapidated roads in Homa Bay County.

During a meeting in Ndhiwa, the Homa Bay independent governor candidate heard that farmers incur huge losses due to failure or delay to harvest their cane by a local sugar miller, Sukari Industry Limited.

The farmers argued that the company's tractors get wrecked while accessing their farms due to bad roads, especially during the rainy season. This has instilled fear among tractor drivers, a situation which has caused inability to have their sugarcane harvested.

Many farmers in the area are now staring at losses of millions of shillings as their produce dries in plantations. A farmer, Millicent Aoko, said they had raised the issue several times to the Sugar Directorate but it still persists.

She said sugarcane farmers are not getting value for their sweat in production of the crop. “We are disappointed farmers because we use a lot of resources to grow the sugarcane but when the crop is mature, it fails to be harvested because of poor roads. It is hurting and demoralising since this amounts to huge financial losses,” Aoko said.

Dr Kidero, who is vying for Homa Bay governor's seat as an independent said his administration will ensure proper construction of the road network if elected on August 9. This will promote sugarcane production by encouraging farmers to grow the crop.

“It is discouraging for a farmer to struggle in growing sugarcane for about two years then the crop dries in the farms because of bad roads. We will fix the problem,” Kidero said.

He said one of the modalities for the construction of roads is prudent utilisation of cess money, which the county government collects from the sugar sector.

“The cess got from the industry should be utilised wisely for improving the road network to cushion farmers from this loss,” he said.

He also pledged to negotiate for better sugarcane prices for farmers and fast-track payments for cane delivered to the miller.

The former city governor proposed that an additional factory was necessary to help in absorbing more sugarcane from local farmers.

“Ndhiwa and many parts of our county have the potential for sugarcane production that requires another sugar factory. There is need for another factory,” Kidero said.