Just 30 minutes of civility was enough to stop House fights

By Brian Otieno | 2yrs ago 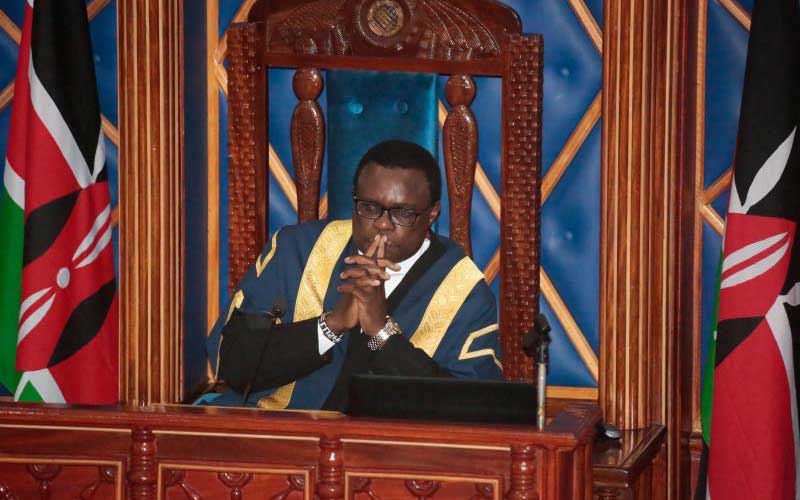 At the end of his four-minute ruling, Speaker Kenneth Lusaka (pictured) declared that his hands were tied. A plan to have some nominated senators vote in place of two of their three colleagues, who had been arrested, had flopped.

The mournful gloom that had clouded the Team Kenya side of the divide was vanished and replaced by sighs and cheers.

Eyes that had turned red with grief would light up and voices that had grown hoarse with rage, at the apparent scheme by the other side to play dirty, would soften at the Speaker’s verdict.

The sorrow shifted, almost abruptly, to the Majority Whip Irungu Kang’ata-led front, and with it came the humbling resignation that the odds were stacked against them.

What had began, for Kang’ata & Co, as resolve to end the revenue-sharing debate that Monday – and that had transformed into anger and later bewilderment at attempts to stall it further – ended in disbelief.

It would have ended in shame, and probably tears had the debate gone further. After previously suffering innumerable losses, Kang’ata’s team had tasted victory twice that day. But even they knew they would not be as lucky with the third strike.

They watched, helplessly, as a mutiny they thought they had stemmed gained life. Their fellow puppets on the opposing side had revolted and had found their voice.

On Monday, it seemed that whatever bond held the senators together, though feebly, would melt away. Weeks of stoking flames had brought their rivalry to the tipping point.

The chamber, in the morning sitting, had been heavy with an air of revolution, as they all united to protest the arrest of senators Cleophas Malala (Kakamega), Christopher Lang’at (Bomet) and Steve Lelegwe of Samburu.

But even that would crumble in the face of the hostility that charged the afternoon sitting.

Tables were banged; voices raised; others almost wept; many more had regrets; and the past, glorifying and dishonouring, was brought up.

Homa Bay Senator Moses Kajwang’ must have wished he had kept his mouth shut as his rivals warned of chaos if the debate continued, as he was reminded of his not so glorious whistle-blowing past.

“Keep your cool, boy! The same person who blew whistles on the President is advising me about chaos... Shut up and listen to wisdom,” Minority Whip Mutula Kilonzo Jnr retorted when Kajwang’ raised concern over his threats to cause chaos.

Elgeyo Marakwet’s Kipchumba Murkomen, tears pooling at his eyelids, had his I have a dream moment as he pleaded his case to the Speaker, and banged the table whenever he thought he had uttered a portentous remark.

But their pleas for adjournment were met with aggressive opposition, veiled in sympathy, as Kang'ata would say while dismissing their case.

The One Man-One Vote-One-Shilling axis came prepared and, with the three senators arrested, they were sure the tables had turned in their favour.

That was until Speaker Lusaka broke their hearts with word that the absentees had issued instructions that no one should vote in their place, and that the law was on their side.

That which had tied the Speaker’s hands had killed their spirits, and they retreated to swallow the bitter pill. Intimidation had failed to win the deviants back, and so had the apparent underhand dealings. The only option on the table was dialogue and, as they all found out, 30 minutes of civility was enough time to discuss a solution to end their fights.

Supreme Court: In divorce, each person should leave marriage with what they acquired individually
National
By Brian Okoth
37 mins ago
Oga Obinna's farewell to Kamene Goro as she exits KISS FM
News
By Diana Anyango
40 mins ago
US military kills senior Islamic State official in Somalia
America
By AP
47 mins ago
Families demand pay for graves in airstrip project
Western
By Benard Lusigi
1 hr ago
.