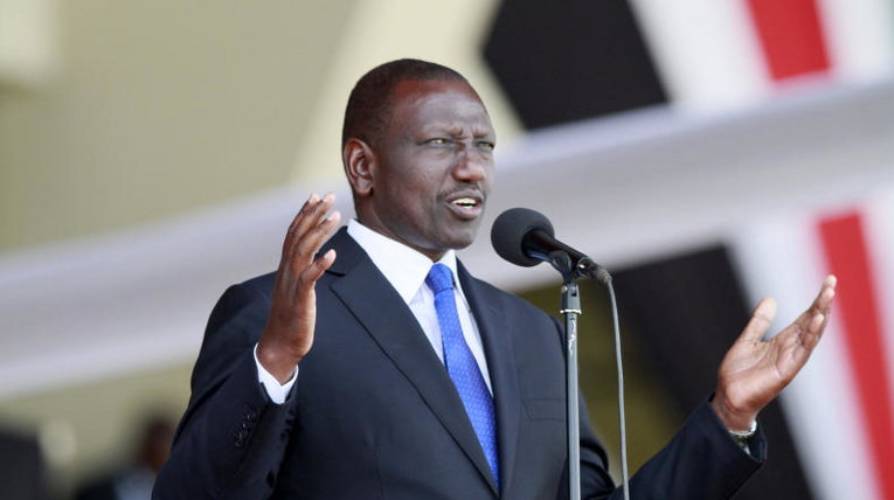 Deputy President William Ruto has urged Kenyans to remain vigilant in the fight against coronavirus.

After missing in action for weeks, the Deputy President William Samoei Ruto has emerged during the celebration of this year’s 57th Madaraka Day at State House Nairobi.

In his short statement, the DP recounted the unique effects that the coronavirus pandemic has had on the lives of Kenyans, since the first case was reported on March 13 this year.

“We have had a journey of 57 years, and every generation has had to deal with tough decisions. But no government has experienced what the Covid-19 has had on our country. Today, our schools are closed, places of worship are shut, traders have had businesses affected, our lives as a nation and as a global community is upside down. While it was normal to cough it is not so nowadays, “noted DP Ruto.

DP Ruto also congratulated Kenyans for stepping up the war on the deadly virus after the government’s directives. The ministry of health guidelines include sanitizing hands, wearing masks, and maintaining social distancing.

“The response of Kenyans was unprecedented. Kenyans stepped forward. Millions of Kenyans are now sanitizing and cleaning their hands, wearing masks, and keeping social distance…every Kenyan is now part of a big army in combatting the Covid-19,” added DP Ruto.

The Deputy President has however reiterated the importance of vigilance, in the war on Covid-19.

He added that Kenyans should now, more than ever, move with zeal to contain the surging numbers of the coronavirus. The war is collective and involves all Kenyans.

“I would like to urge Kenyans to help work out this new normal. Since it is not if but an imperative that this will be a new normal. I am calling on leaders and Kenyans across the nation to work towards ensuring that we mitigate the effects of this virus. If we can fashion the new normal, then we can now deal with how to open our schools, our businesses, and places of worship,” explained DP Ruto.

President Uhuru Kenyatta, who led the event, recounted the importance of this national day, after the country got independence and self-governance.

“Some of those who struggled for our liberty are here with us today. We Salute You. All those who fought for our liberation gave something of themselves; some gave all, even their lives. We honor and thank them for their sacrifice, for the immense hope that fired them on, and for their refusal to ever give tyranny a permanent foothold in our country,’’ said President Uhuru Kenyatta.

DP Ruto had been particularly missing from the public eye even after the “sanitization” process in the ruling Party targeted his political allies. Many waited for his response on the thorny issues, but he dogged the topic in today’s address.

Just a few days ago, his diehards in Parliament were ousted in quick succession, in what seemed like a house “fumigation” exercise.  This, according to the party leadership was part of the efforts to steady the ship towards the 2022 General Election.

The bloodbath saw DP Ruto’s Generals fall on the party’s sword. This is after they refused to show up during the Party’s meeting at State House, Nairobi, even when the gathering was chaired by President Uhuru the Jubilee Party leader.

The DP who was also absent remained mum even when there seemed to be no party at Jubilee. In the meeting, it was resolved to make radical changes in the Party’s leadership in the Senate.

Correspondingly, the Senate Deputy Speaker Kithure Kindiki was shown the door with an overwhelming 54 votes against seven, in a vote of no confidence against him. The opposers of the motion were later axed from the leadership of powerful House committees.

They included Nandi Senator, Samson Cherargei, and Bomet’s Dr. Christopher Lang ‘at among others. Senator Lang'at was ousted from the House Business Committee and lost the Education Committee chairman post.

Senator Cherargei was also de-whipped from the Justice and Legal Affairs Committee chairmanship with his Meru counterpart Linturi Mithika also losing his membership at the powerful Senate County Public Accounts and Investment Committee.

According to the Party Secretary-General Raphael Tuju, the move was to weed out and crack the whip on the disloyal members who changed tact after winning the 2017 General Elections.

However, considerably, all the speakers in today’s Madaraka Day, evaded the political question in their speeches. The only issues affecting the country caused by Covid-19 were tackled.

Madaraka Day is marked every June 1st of every year in the Republic of Kenya. It commemorates the day in 1963 that Kenya attained independent self-governance after decades as a Kenya Colony.

Notably, this year’s event was marked devoid of the usual crowds witnessed. Kenyans were asked to follow through the proceedings at home, through radio, Television among other avenues.

Traditionally, the day is characteristic of open celebrations in packed stadia with military parades, entertainment, and song and dance.

It would have been a time for merry-making for some families and a time to reflect on the achievements since June 1, 1963, when founding President Jomo Kenyatta became the first prime minister.

But, with Covid-19, everything has changed. Enthusiasts of Madaraka Day, who always look forward to the celebrations, have been forced to remain indoors, with no guests and only family members to watch the live proceedings.

Traders, too, would have made a kill out of the event. Most of them normally sell special commemorative artifacts to hundreds of people thronging celebration venues. Today, they count losses.

Just days, before the event, the Interior Principal Secretary Karanja Kibicho, had announced the new style in marking the national holiday.

“The celebration will run from 8 am and will culminate in the live address by His Excellency, the President from State House, Nairobi,” read a statement from his office.

This, despite top gear preparations which were underway in Gusii stadium to ensure the facility was ready to host the day. Over Sh60 million was injected to facilitate that.

During last year’s celebration in Narok, the president made a decision to rotate the hosting of national celebration in order to strengthen our nationhood with so far Nakuru, Nyeri, Machakos, Meru, and Kakamega having hosted the occasion.

This year’s Madaraka day was supposed to be held in Kisii County, but due to the current Covid-19 situation, it has been held at State House Nairobi, in efforts to prevent the spread of the virus. It is now unknown whether or not, Kisii County will still have the chance to hold the annual event when Covid-19 cloud clears.

Madaraka Day is marked every June 1 of every year in the Republic of Kenya. It commemorates the day in 1963 that Kenya attained self-governance.