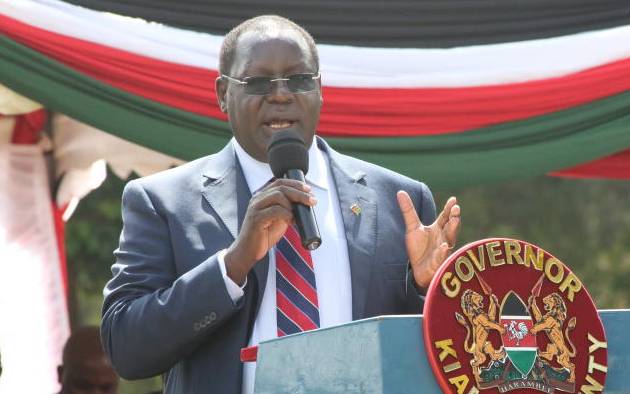 Kiambu Governor James Nyoro (pictured) has condemned an incident in which a section of Kiambu residents was given relief food which later turned out to be poisonous by unknown donors. The county boss who addressed the media at Kiambu County headquarters termed the Sunday incident unfortunate and called on donors to use the legal guidelines set by the government for donations. “It is very unfortunate that politics can be used to poison our people, we have directed that all food donations be done with the set guidelines", he said. So far, 12 people have been treated after developing medical problems in their post consumption of the donated food. Governor Nyoro revealed that some of the victims were referred to go for specialised treatments at Kiambu and Thika Level Five hospitals. The patients are said to have displayed signs of nausea, headache and stomach upsets after consuming the food, especially sugar. Kiambu County health department also confirmed that samples had been collected from the victims to test them. The food supplies, which included maize flour and sugar were distributed to residents of Karai and Nachu wards in Kikuyu Constituency. They were packaged in bags branded in a manner suggesting that they had originated from William Ruto Foundation and MP Kimani Ichangwah. The red bags also had “Stay Safe” writing beaming on them. However, the area MP Kimani Ichungwah distanced himself from the food distribution saying that they must have been donated by political rivals keen to soil the name of Deputy President Wiliam Ruto. “These are not our foodstuffs and we are not distributing anything openly and on vehicles on roads or stadiums and even the fake branding and items are not anything close to what we are distributing,” the said. He confirmed that he and DP Ruto were indeed donating food supplies but were using the religious leaders to identify the deserving recipients. “A family that consumed the sugar suspect it was poisonous as two of them have been treated after consuming it…Inform all your neighbours. Any support from our office will be delivered to your houses by your known neighbours and church leaders,” he further said. Another rejoinder came from the William Ruto Foundation which also distanced itself from the poisonous food supplies. “The William Ruto Foundation would like to categorically and unequivocally distance itself from the distribution of relief food that has affected residents of Kikuyu Constituency. The donations in question are not from the William Ruto Foundation,” read a statement from David Mugonyi, the Communications Secretary in the Office of the Deputy President.