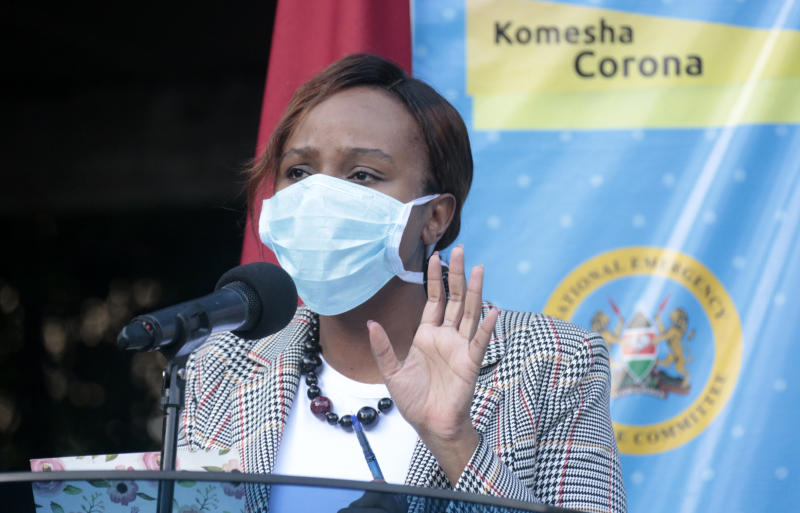 Kenya’s confirmed coronavirus cases have leapt to 758 after 21 more people tested positive today. Announcing the latest update, the Health CAS Mercy Mwangangi (pictured) said in the past 24 hours, the country had tested 1, 486 samples bringing the tally of all tested samples in the Kenya to 36, 918. Out of the new 21 cases, 14 are male and seven are female. All are aged between seven and 79 years.

In the latest report, Mombasa reported 12 cases, Kajiado and Nairobi counties four cases each, while Uasin Gishu reported one case. Dr Mwangangi said three of the patients had been discharged after they tested positive for the virus raising the tally for recoveries to 284. However, two more patients died in Nairobi bringing the total number of fatalities in the country to 42. Cross-border transmission In the fight against Covid-19, the Government has turned its focus on the border points after Tanzania’s truck drivers continued to test positive for the virus.

An additional four cases were reported at the Namanga border in the last 24 hours and were returned to Tanzania. Dr Mwangangi said that extra precautions were being taken at the Namanga and Isbania borders in Migori Country in order to combat the cross-border transmission of coronavirus. “Our porous borders are the ones that have become the latest high risk areas in the transmission of the disease and they are now our key area of focus,” she said, adding truck drivers were now the weak link in fight against the disease. The CAS also urged residents at the border points to be on the lookout and maintain the current containment measures so that the curve can be flattened. We do appeal to our communities living within and around our border counties to actively exercise the Nyumba Kumi policy. We should be vigilant and we should report any suspicious individuals who may use panya routes to get into the country,” she said.