America
US president has threatened to freeze his country’s funding saying the organisation had “missed the call” on the coronavirus pandemic. 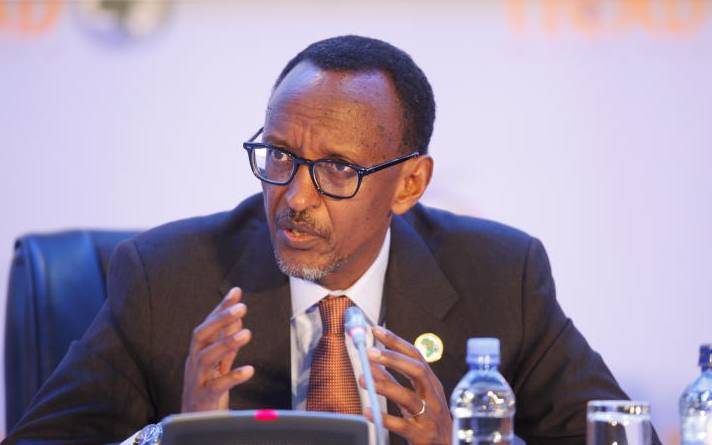 Rwanda’s President Paul Kagame (above) is the latest African leader to defend the World Health Organisation (WHO) and its head Dr Tedros Adhanom Ghebreyesus against attacks by US President Donald Trump. Mr Trump tweeted on Tuesday that the WHO was “very China-centric” yet it is “largely” funded by the US. He warned that he could stop funding the global health organisation. Earlier AU Commission Chairperson Moussa Faki Mahamat had defended the Ethiopia WHO chief and Mr Kagame backed this up.

“Totally agree, and asking this: Is it Dr Tedros, WHO, China... under attack or all of them together?” Namibia’s President Hage Geingob also supported Dr Tedros, the first African to head WHO, calling him a “true flag bearer of multilateralism when global solidarity has become critical”. Trump on Tuesday threatened to freeze US funding to the World Health Organisation (WHO), saying the international group had “missed the call” on the coronavirus pandemic. Trump also played down the release of January memos from a senior adviser that represented an early warning of a possible coronavirus pandemic, saying he had not seen them at the time. But he turned his anger on the WHO, first declaring that he would cut off US funding for the organisation, then backtracking and saying he would “strongly consider” such a move. Trump said the international group had “called it wrong” on the virus and that the organisation was “very China-centric” in its approach, suggesting that the WHO had gone along with Beijing’s efforts months ago to minimise the severity of the outbreak. WHO has praised China for its transparency on the virus, even though there has been reason to believe that more people died of COVID-19 than the country’s official tally.

“They should have known and they probably did know,” Trump said of WHO officials. Throughout his presidency, Trump has voiced skepticism toward many international organisations and has repeatedly heaped scorn on the WHO. In its most recent budget proposal, in February, the Trump administration called for slashing the US contribution to the WHO from an estimated $122.6 million to $57.9 million. WHO’s current guidance does not advocate closing borders or restricting travel, though many nations, including the United States, have enacted those steps. WHO declared Covid-19 a public health emergency on January 30, nearly a month before Trump tweeted that “The Coronavirus is very much under control in the USA” and a full 43 days before he declared a national emergency in the US. Health experts have suggested that the weekly death totals will reach a new high in the United States this week. More than 12,000 people have died from the virus in the US. Vice President Mike Pence said that the Centers for Disease Control will release new guidelines this week for returning to work for people with potential exposure but who may not be displaying symptoms.

Trump continued on Tuesday to defend his actions in the early days of the crisis. He played down memos written by Peter Navarro, a senior White House adviser, that were made public this week. In the late January memos, the most direct warning as yet uncovered in the upper levels of the Trump administration, Navarro warned that the coronavirus crisis could cost the United States trillions of dollars and put millions of Americans at risk of illness or death. Trump said Tuesday that he was not aware of the memos back in January but that he unilaterally followed some of their recommendations, including taking steps to curtail travel from China. But he said he wouldn’t have wanted to act prematurely when it was not clear how dire the situation would become. “I don’t want to create havoc and shock and everything else. I’m not going to go out and start screaming, ’This could happen, this could happen,’” Trump said. “I’m a cheerleader for this country.”

Protests heat up as curfews imposed in several cities