Why most first-class degree holders are under-achievers

Opinion
For many, undergraduate life is a moment of experiment, savouring a newfound liberty, and a time to explore and nudge at the limits. 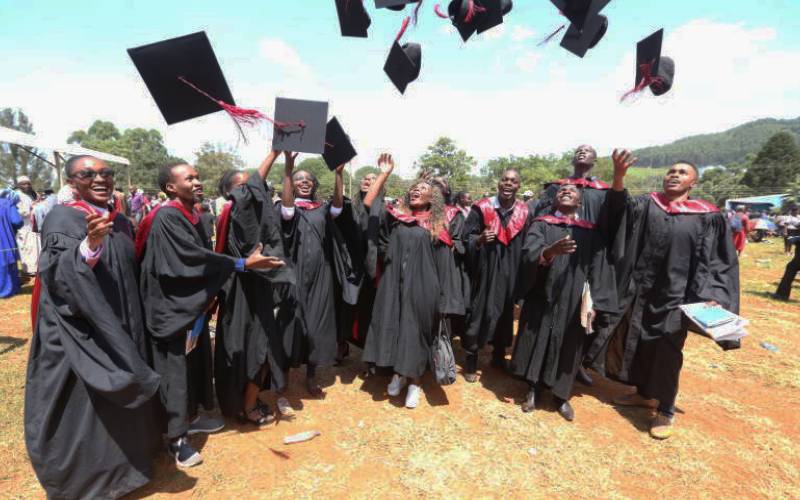 Afirst-class honours degree is the Holy Grail of under-graduate education. It is equivalent to the Olympic gold medal. A rarity in times gone by, it is a symbol of academic excellence and discipline at an age and season in life when few individuals can claim to possess those attributes. For many, undergraduate life is a moment of experiment, savouring a newfound liberty, and a time to explore and nudge at the limits. Only in their second, and sometimes third year of study do many under-graduates come to the full realisation that toiling on books is their core mission. Yet, for the few who eventually get a first-class degree, it is a marathon of ‘black-mamba’ focus, a rigorous work ethic. From the first day and first year of study to the last. It means a quasi-four year ‘lock-down’ in university libraries. You see, for one to gain the coveted first class, he or she must deliver an average of an A, set at 70 per cent for the entire four or five years of study. For the seven or eight courses in a 14-week semester, straight ‘As’ are delivered in no less than five subjects with excellent results in the rest.

Powerful statement The academic demands are weighty. And few make the cut. Thus, a first-class degree is a powerful societal statement. It is a bold announcement to the academic community of its self-regeneration. In past graduations, maybe not anymore, awardees’ names would be read in full. The bragging rights would last for months, even years. Once upon a time, the government would automatically award scholarships to all first-class students as part of academic staff development programme. It transformed first-class degree holders to the elite of graduate school studentship. In the absence of a first-class, some schools would appoint second-class upper students with impressive grades to take up these roles. Many would begin as tutorial fellows, or graduate assistants, and work on their master’s degrees as they joined their former lecturers. It was a pipeline to a transformational career as many would be gainfully employed -- in a noble vocation -- at a fairly young age. With many barely in their mid-20s, life ahead beckoned with endless opportunities. The arrangement was brilliant. The top crème would stay back and help fire the steam of the next generation of undergraduates. It was equally socially responsive, for many beneficiaries from poor homes and peasantry would access expensive graduate education at no cost.

It was a fine balance where the academe got the first chance to pick out the best before the other professions. Things have changed, and the academe now relies on those who show up with cash in hand, and those who eventually cross the finish line. But that is a different story. Anyhow, for the five years that I taught at the School of Information Sciences in Moi University, I cannot recall the faculty board awarding a first class. There were the near misses, but almost certainly not substantive ones. Perhaps the school board, like many others across the country, were cautious and circumspect in approving such awards. There would be good reasons, I would later learn. The badge of a first-class degree, with all its glamour and prestige, many times ended up an unnecessary burden and a jinx to those who got it. From my experience, the brilliance and discipline invested by those who earn first-class degrees are rarely replicated at graduate schools. Except for a few close friends whom I cannot mention, most awardees of first-class honours often turned out a huge disappointment when placed into the academic pipeline. The reasons for this require some detailed study but I wish to hazard a few guesses.  First, and possibly what is often obvious to those teaching graduate students, is that those who got first class degrees walk into graduate seminar rooms with some sense of entitlement. Without saying it --although most would not miss the odd occasion to announce it -- many graduate students who earned first class degrees saw their past triumph as something that should constantly define their identity as graduate students and beyond. Unhealthy fascination

This unhealthy fascination with the bygone self, from what was obviously an impressive feat, becomes a yoke that ties them to the past and distracts them from present realisms. Further, it entangles most with the strain of claim-making in a system that is unwilling, or unable to cede or meet those claims. It then leads to frustration, with many of these brilliant minds falling away without completing their studies. Some slide into depression. Many more take ages to complete what would ordinarily be a two-year degree. Their run-of-the-mill classmates, who had modest academic scores, easily out-perform them on all indices. Second, while academic intelligence is enough to earn a first-class degree, it calls for other intelligences to excel in graduate school. Excellence in a graduate degree includes a combination of intelligence, acquiring soft-skills, emotional and social intelligence and an abiding sense of diligence. It takes a major climb-down for a regular fresh graduate to internalise and develop these skills, let alone one who earned a first-class degree. A graduate degree, to quote a Makerere University graduate student I recently met, is 60 per cent  academics and 40 per cent politics. Many first-class students struggle to manage the complex politics required for graduate schooling. A few think they are smarter than their lecturers and unwisely express it in unsubtle ways.  Third, I think first class degrees sometimes lead to what I would refer to as ‘shrine-making.’ Many awardees fail to see it as a moment in a continuum of life. Rather than move on, they pitch tent. Unlike O-levels, there is a false-finality that a first-class honours degree gives to graduate students, especially to those who opt for academic careers. It then becomes an ‘intimate enemy’. As their ‘average’ colleagues are pushed by their sense of inadequacy to prove mettle, they instead get lulled into complacency. Getting a first-class thus becomes a seductive shrine, a stronghold, and awardees feel compelled to pay homage by repetitively reminding self and (usually insignificant) others. Meanwhile, time and opportunities pass them. I think there should be a deliberate effort at counselling ‘over-achieving’ undergraduates. It should be made clear that while excellent scores are desirable, they are also part of the vicissitudes of the journey of academic life.  Importantly, first class degrees are awarded. They are not merely earned. This means school boards may consider making holistic considerations beyond those pegged on blunt, high scores. Ordinarily, a first-class student should exhibit leadership, interest in sports or other extra-curricular activities, good manners and other competencies beyond book mastery. As such, it makes sense for first-class degrees to be awarded with the utmost of caution and consideration. A faculty board lavish in awarding first-class degrees, only exacerbates underachievement among first-class degree holders.