Politics
Atwoli claimed that the death of the officer has further tainted the integrity of the DP whom he claims cannot pass the integrity test. 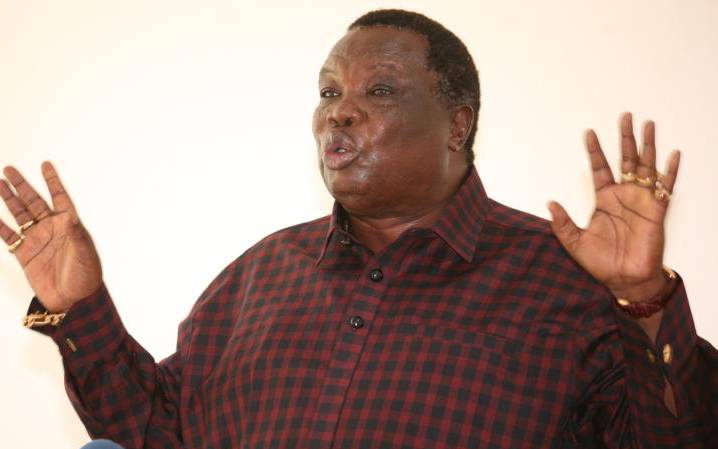 Central Organisation of Trade Unions Secretary-General Francis Atwoli (above) has challenged Deputy President William Ruto to record a statement with the Directorate of Criminal Investigations over the murder of Sergeant Kipyegon Kenei. Atwoli who launched scathing attacks on the DP over his handling of the matter accused Ruto of hypocrisy adding that the DP will not make it to the ballot. He claimed that the death of the officer has further tainted the integrity of the DP whom he claims cannot pass the integrity test.

The unionist claimed that the crime originated in Ruto’s office with the alleged Sh39 billion fake arms deal involving former Cabinet Secretary Rashid Echesa which he claims could have been orchestrated by powerful individuals. “The DP cannot tell us that people used his office for 1 hour 22 minutes without his knowledge and that no one informed him that some people were using his office. How can we believe that?” posed Atwoli. Last week, the DCI played video footage showing former Sports Cabinet Secretary Rashid Echesa and two foreigners linked to the companies at the centre of fake arms deal meeting at DP Ruto’s office for over one hour. And during the burial of the slain officer in Chamasis, Nakuru County, the DP told mourners that he met Kenei with some officers in his office the Monday before he was found dead and that he had sought to find out what transpired when he was away. The DP said he directed them to record statements with the DCI and that was the last interaction he had with Kenei whom he described as obedient and professional.

Speaking in Kisumu on Monday, however, the vibrant trade unionist said that the DP should share with detectives the content of the conversation he claimed he had with Kenei. He claimed that the DP has the powers to call for an independent probe and even seek for help from the Federal Bureau of Investigations if he does not have faith in the country’s DCI. “The DP sits in the national Security Council and if he does not have confidence in the DCI, he can tell the President and they invite FBI to help with the probe,” said Atwoli. Atwoli poked holes into Ruto’s integrity and said that he would not make it to the ballot because of the series of controversies that have rocked his leadership. The death of Kenei has further cast a dark cloud on the office of the Deputy President given that he was among the persons of interest that had been expected to record statements with detectives over the alleged fake arms deal.

SEE ALSO: Why allies and critics monitor Ruto’s every step and word

According to Atwoli, the developments are some of the reasons that have finished Ruto’s chances of making it to the ballot in 2022. “The DP will not make it to the ballot in 2022 because of integrity issues. There are several integrity issues that surrounds and he has not even declared his wealth,” claimed Atwoli. Atwoli claimed that the DP will not be the president of the country in 2022 citing several controversies including claims of corruption in which he is linking Ruto with. “Sergeant Kenei died in his office. Is that not an integrity issue,” he posed. He also took a swipe at the DP over his attacks and those of his allies against the union between President Uhuru Kenyatta and former Prime Minister Raila Odinga.

“You cannot separate the president and the former Prime Minister because they are bound by a memorandum of understanding. Any intelligent leader should learn to adapt to the change,” said Atwoli. He also claimed that he can cause jitters if he opted to contest the presidency and told off leaders pushing him to declare his stand.

I have no bad feelings against DP Ruto, declares Cotu boss Francis Atwoli