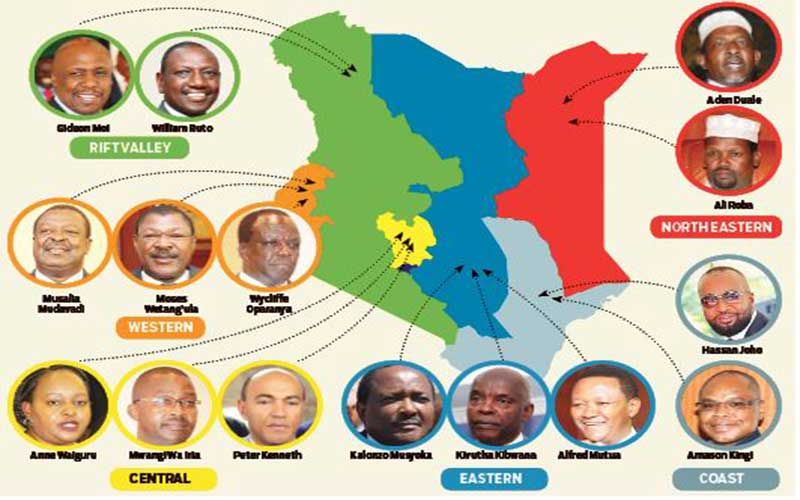 Looming constitutional reforms to expand the Executive have triggered a scramble for the proposed posts by politicians, with equally radical proposals on regional interests adding fuel to the fire. The push for constitutional reforms is increasingly being defined by fierce lobbying for more leadership positions, sold by politicians as a remedy for the winner-take-all system, which has been blamed for election violence. National concerns like unemployment and cost of living that are dear to special interest groups like farmers, and business people have been swept under the carpet. While the initial Building Bridges Initiative report proposed creation of a prime minister’s post, the second phase of BBI meetings is likely to yield radical proposals given the aggressive push for more positions through introduction of regional governments- the Bomas draft that is largely influencing the latest views recommended 14- and two posts of deputy premiers.

President vs PM There is a split on the powers to be wielded by the PM- some want the holder to be Head of Government- but critics who prefer the status quo where president is Head of State and Government are against creating two centres of power.  And in yet another push to accommodate politicians, it has been proposed that the runner-up in a presidential election becomes the Leader of Official Opposition. Wiper party sweetens this proposal by proposing that the person sits in the Senate, which is proposed to be the Upper House, while their running mate takes up a similar position in the National Assembly. Another proposal popular with politicians is to have a Cabinet picked from among MPs.   Politicians eyeing regional supremacy to raise their stakes in political negotiations in the lead up to the 2022 elections, including positioning themselves as potential running mates for top presidential contenders, have opened new battle fronts in President Uhuru Kenyatta’s succession.

Second-term governors are lobbying for introduction of regional governments, which offer new powerful post for the 22 county chiefs serving final terms. Uasin Gishu Governor Jackson Mandago recently declared publicly that BBI was only about accommodating the interests of the political class. “Mambo ya BBI, hiyo isiwasumbue akili. Hii BBI is not about you. It is about sisi wenye tuko kwa viti. Sisi wengine tulikuwa tumeona tunakaribia kuenda nyumbani,” Mandago who is serving a final term in office told a public meeting. Mandera Governor Ali Roba said it is the people to decide whether they should continue serving at whatever level. “We will find relevance in the new structure. We support the BBI and are excited about the opportunities the handshake is bringing to all Kenyans,” Roba said.

He added: “It is too soon to make a decision. We will wait for what the BBI will come up with. Whether there will be new positions or term limits will be removed. What is important is that we are here and still in circulation.” Other governors who have shown their support for the report include Hassan Joho (Mombasa), Sospeter Ojaamong’ (Busia), James Ongwae (Kisii), Charity Ngilu (Kitui), Anyang’ Nyong’o (Kisumu) and Alfred Mutua of Machakos. The push for an expanded Executive justified as necessary to ensure an all-inclusive government is emerging as the most popular among politicians with no tangible measures outlined to improve the welfare of other Kenyans, yet Uhuru and Raila identified nine thematic areas to secure the country’s stability and prosperity. Cotu Secretary General Francis Atwoli has constantly reminded Kenyans that Uhuru is still young, and the Constitution should be amended to create a position of prime minister for him to continue being in government. “Where is Uhuru going and he is young? Atasumbua watu wengine. We must amend (the) Constitution to accommodate him somewhere,” Atwoli once remarked.

The push for regional governments, however, is unsettling certain political constituencies like Mt Kenya that have in the past scuttled similar campaigns- the abortive Bomas draft had proposed 14 regions- because the calls to regions is likened to majimbo- federalism. It is a system opponents argue entrenches ethnic enclaves that disenfranchises people who are not from a region’s dominant community. Tied to this is the lobbying for community interests particularly on the thorny land issue that has revived age old political suspicions and divisions that are threatening to undermine Uhuru and ODM leader Raila Odinga’s goal to unite the country. Narok Senator Ledama ole Kina is already in trouble with the authorities for statements deemed incitement, while Emurua Dikirr MP Johana Ngeno was also arrested on claims of hosting an illegal BBI meeting in protest at Ledama’s utterances. Mt Kenya leaders have protested the statements by Ledama that people from other communities should not run for political seats in the Masaai counties and his push for land redistribution. They said these inflamed ethnic tensions in Narok.