Leaders allied to Deputy President William Ruto  have arrived at Kinoru Stadium, Meru county for the Mt Kenya Building Bridges Initiative (BBI) regional forum despite earlier indicatations that they would skip the meeeting.

Led by Senate Majority Kipchumba Murkomen and Gatundu South MP Moses Kuria, the leaders who skipped the Narok rally arrived at Kinoru amid cheers some minutes past noon.

The leaders were welcome to the main dais and chairs were seen being brought to the dais for them.

“On our way to BBI rally in Meru,” Kuria who was accompanied by Murkomen had posted on his Facebook.

The Tangatanga MPs skipped and castigated the fist and the second BBI forums that took place in Kisii and Kakamega respectively, but attended both the Mombasa and Kitui ones before skipping the Narok one.

Murkomen said he only skipped the Narok rally after he realised that it was to be used to profile some communities living in Narok and Kajiado counties and that he would attend Meru rally. 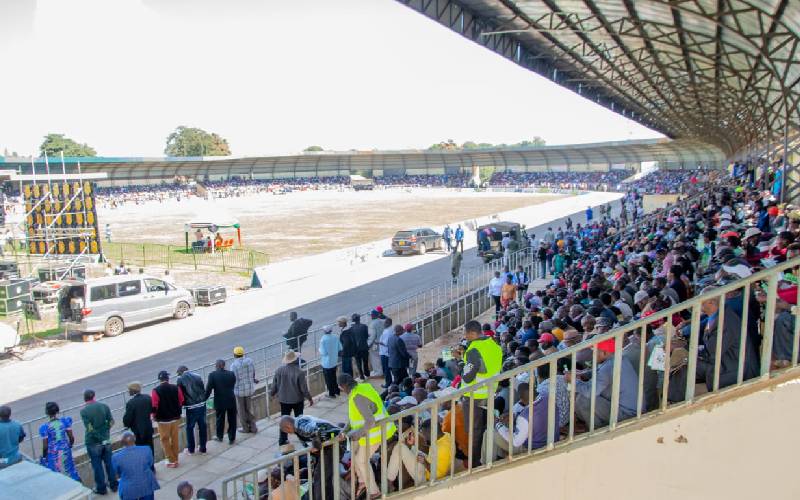 Ruto also warned that if the BBI proponents continue to use the rallies to incite Kenyans, they will have no otherwise but to the forums.

If the rallies are being used to divide Kenyans along ethnic lines, we will have no otherwise but to stop the reggae,” warned Ruto.

Meanwhile, some Mt Kenya governors have warned against plans to hire hooligans to disrupt or heckle leaders at the Meru rally, saying measures have been put in place to deal with any security breach.

Host Governor Kiraitu Murungi, Muthomi Njuki (Tharaka-Nithi), and their Embu counterpart Martin Wambora said they have information that some leaders opposed to the document are planning to cause chaos at Kinoru.

“We know some leaders have hired hundreds of bodaboda riders in Tharaka-Nithi, Laikipia and Isiolo counties to storm the Saturday rally. The perpetrators should know that we are ready to counter them,” said Njuki.

He warned Bodaboda riders and youths against being used to try and disrupt the rally because the culprits will be arrested.

Murungi said all leaders who support BBI is welcome to attend the rally although only those from the 11 counties making the Mount Kenya region will be given a chance to speak.

Also in attendance is ODM leader Raila Odinga and Baringo Senator Gideon Moi among other leaders.