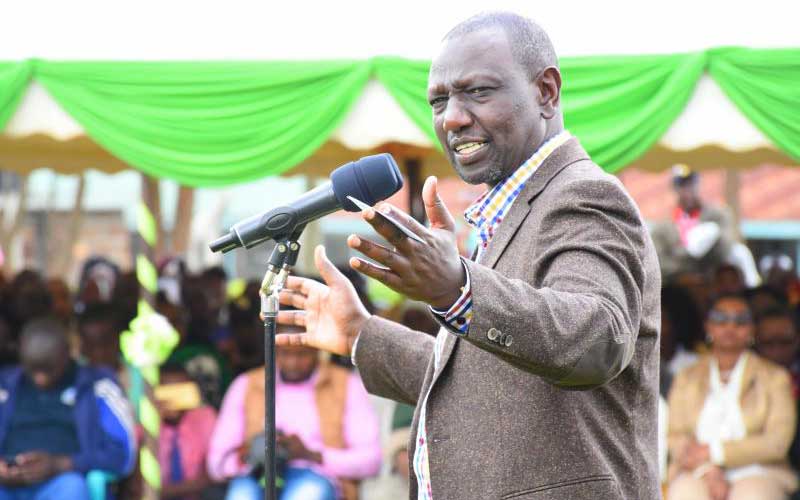 Is the unremitting public display of fury against the Deputy President William Ruto (pictured), a diversionary and distortive ploy ahead of 2022? Does it have the ring of a red herring? It seems that Kenyans must be directed away from the great questions of the day, to angrily focus, instead, on an individual. The 2022 election must be determined on the platform of that anger. A section of our political class excels in positioning angry election agenda against individuals and communities. In the process, important issues are buried – until after the poll. This is at work again. We must bury issues under pious anger, holier-than-thou political campaigns disguised as legal reform, arbitrary arrests and intimidation. Raila Odinga is particularly riled that the DP often speaks against what he calls “dynastic rule in Kenya.” He revisited this topic this week at the burial of former President Moi. The location, the moment and the unprovoked angry rendition betrayed a hidden agenda. He came not necessarily to bury Moi. Political goals were more important. The burial only provided a good platform and excuse. Politicians were on a brief break from their routine caustic political tirades. They wanted to give a respected elder and member of their class a decent send off. Raila’s angry flare-up against the DP went against the grain. It is a tribute to the DP that he did not respond in kind. Going forward, he will need to keep his wits about himself, or disgrace himself.

There is nothing wrong about dynasties. Throughout history, the world has been ruled by both hereditary and elected dynasties. Some have ruled well. Others have been disastrous. A dynasty is simply a succession of rulers from the same family. You cannot deny your membership of a family. And if it has produced leaders, you can hardly run away from the dynastic tag. In point of fact, dynasties can be very good. The Yamoto Dynasty has ruled Japan for 1,360 years. The House of Windsor is alive and well in the UK, Canada, Australia and New Zealand, among other places. Others are in Belgium, Denmark, Norway, Lesotho, Morocco, Saudi Arabia – and in many other places. Dynasties in the West have been counterbalanced by liberal democracy. In virtually all of these places, the dynasties have had their own stabilising effect. The anger against the DP is, therefore, not because he has talked about dynasties. While I cannot speak about the corruption allegations against him, I know that this is not even the factor driving the anger against him. Kenya’s political class is corrupt and it would have to commit suicide before it ends corruption. Kenya’s politics roll on the wheels, engine and oil of corruption. What is it then? Anger is the best campaign platform in Kenya. If you want to win an election, direct public anger against somebody, or some tribe. In 2002, it was anger against President Moi and his Uhuru project. The angry population won. It brought Mwai Kibaki and Narc to power. Unfortunately, the victors had nothing in common, beyond anger. They were soon divided and set the country on fire and spilled blood in 2007/8. The slogan in this blood spillage was “41 against one.”  Further fire

We ended up before the International Criminal Court. Then came 2013. Now the election was an angry script about the ICC. Mercifully, the ICC was a deterrence against further fire and blood in 2013. In 2017, with the ICC out of the way, a new wave of anger informed the elections. The Opposition campaigned angrily against what they called “a bus whose driver was permanently drunk while the conductor was a thief.” Jubilee Party campaigned with equal anger against “a mad witch doctor and his friends.” Once again, the country bled. In the lead up to 2022, President Uhuru Kenyatta and Raila have found good rapport – at least for now. But they are using it badly. They seem to be agreed that Ruto is their common enemy – nothing bad with that. What is wrong is the same bad approach from the past. They are approaching 2022 using the same weapon of anger.   Yet, the DP has himself been a beneficiary of this dangerous propagandist approach. Hopefully he now begins to see things with older, sadder, but wiser eyes. Hopefully, too, he will not embrace an angry counteroffensive. Critically, it is important for him to understand that the brewing anger against him is also meant to divert the country from asking salient questions about the Building Bridges Initiative (BBI). Kenyans are not supposed to understand the BBI. It seems that if anyone asks a question, we should simply call him or her a “Tangatanga” and “Ruto” person, or sympathiser. Tangatanga should itself be like leprosy whose questions do not deserve answers. You can then go on to win the proposed referendum and from there the 2022 election. If the scales fall off people’s eyes after that, it will not matter. Your goals will be already accomplished. It is curious that the government has failed to distribute copies of the BBI report at the ongoing “popularisation rallies.” This is because they are not relevant. What is relevant is to shoo up anger against Ruto and to get crowd buy in. When Governor Mwangi wa Iria tried to print and distribute copies of the report, he ran into serious trouble. Kenya stares yet again at havoc. — The writer is a strategic public communications adviser. www.barrackmuluka.co.ke