Politics
According to the two, an alliance with Gideon will guarantee a winnable formation in the 2022 presidential race. 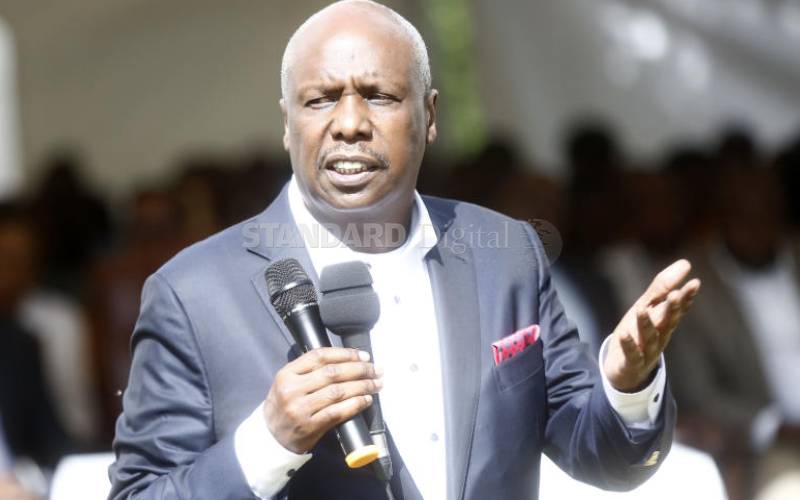 Days after the transition of political leadership to Senator Gideon Moi (pictured) following the death of his father President Daniel Moi, a section of Luhya MPs have moved to welcome him into forming a coalition with the community. The Baringo Senator was last week handed the symbolic ‘Rungu ya Nyayo’ during the funeral of his father at Kabarak. With the new political development, two Amani National Congress MPs now want the senator to seek alliance with the party and the Luhya community.

SEE ALSO: Raila: My deal with Uhuru is on reforms not ‘nusu mkate’

They are Tindi Mwale of Butere and his Lugari counterpart Ayub Savula. The leaders attended the Butere Sub-County ANC party delegates meeting, where they passed strategies to strengthen the party ahead of 2022. According to the two, an alliance with Gideon will guarantee a winnable formation in the 2022 presidential race. Mwale acknowledged that the crowning of Senator Moi will play a big role in President Uhuru Kenyatta's succession politics . Mwale urged the senator to engage other Luhya kingpins into forming a formidable alliance ahead of 2022.

SEE ALSO: We should consider many things before reopening the economy — AMREF CEO Dr Githinji Gitahi

According to Mwale, the Baringo Senator accepting a collaboration with the Luhya community will increase his chances of winning the presidency. “We are asking Gideon to support one of our own as we prep him in future to take this presidential seat,” he said. The symbolic passing of President Moi's baton to Gideon has raised questions on who will now control the vote-rich Rift Valley. Savula, whois also ANC party deputy leader, added that the Luhya people recognise that senator Moi is now the official Kalenjin Spokesperson capable of leading the entire Rift Valley bloc. The two MPs have invited the Kanu chairman to the Western region for political rallies as he solidifies his name as a future presidential candidate.

SEE ALSO: Why Uhuru could use new advice on ailing economy

Savula said a politician from the Luhya community should be identified as the sole presidential flag bearer in the 2022 race. Among those who have shown interest in the seat include ANC leader Musalia Mudavadi, his Ford- Kenya counterpart Moses Wetang’ula and Kakamega Governor Wycliffe Oparanya.  Of the three, Savula is optimistic that if a right alliance is formed, one will succeed Uhuru.

No thank you, you can have your Senate post, Murkomen tells Jubilee