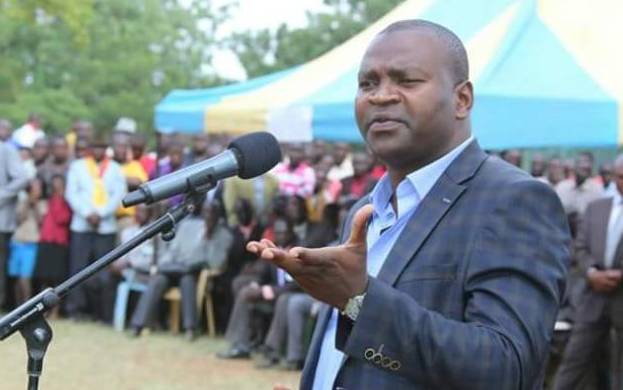 Former Sports Cabinet Secretary Rashid Echesa (pictured) was yesterday arrested in an investigation into a Sh39 billion fake tender deal to supply the government with military surveillance equipment, guns, and ammunition. His arrest followed a complaint by two gun dealers who claimed he had swindled them Sh11.5 million they had paid as ‘consultancy fees’. They claimed the former CS had promised to use his influence to help them secure the multi-billion shilling security tender.

Police claimed they had recovered documents bearing government letterheads from Echesa, and that detectives were working to verify their authenticity.  It also emerged that one of the American merchants keen to win the tender to supply guns and ammunition had been hosted by the former CS at Harambee House Annex Building, where Deputy President has his office. Police yesterday visited the building and recovered copies of the documents that Echesa had allegedly given to the investors. Directorate of Criminal Investigations boss George Kinoti said they were investigating claims that Echesa had defrauded the foreigners. “He has even been hosting them in a government boardroom claiming he would help secure the said tender,” said Mr Kinoti.

SEE ALSO: Tactical retreat or slow surrender: What next for DP Ruto after purge?

Sources said the foreigners claimed to have been taken to a boardroom in the deputy president’s office more than once during negotiations. Police said one of the complainants took them to the venue of their alleged meetings, where documents were recovered from one of the receptions after a search. The investor said in his statement that he was supposed to sign an agreement to pay Sh3.9 billion to Echesa as a 10 per cent down-payment to facilitate the process of awarding the tender. Contacted on claims that the DP’s office was being used to defraud businessmen, the DP’s spokesman David Mugonyi responded: “We are not aware. This is a public office that is accessed by many people. The DP was not in the annex office today.” The businessman told police that Echesa had travelled to Poland early last month to meet him to negotiate the deal. He said it was after their meeting in Warsaw that he was convinced to travel to Kenya.

He claimed that after counter-checking, he realised the deal was not genuine and reported the matter to the police. Detectives from the Special Service Unit arrested Echesa on the road in Nairobi, handcuffed him and drove him to the DCI headquarters for grilling. The foreigners were also present for questioning. Another team impounded Echesa’s Range Rover and drove it to the DCI headquarters, where it was searched and dusted for prints. The investigators said they recovered more crucial documents that had a bearing on the case. Supply firearms According to an officer in the team, Echesa had left a government office in the city centre and was driving towards Kilimani area when he was intercepted. Kinoti said they were investigating to establish all those involved in the alleged fraud scheme. Tenders to supply firearms and ammunition are usually floated by respective departments, which include the Department of Defence, for the military, and the Ministry of Interior for police, prisons and the Kenya Wildlife Service. We could not get a comment from Echesa, who was locked up at Muthaiga Police Station last evening together with three other suspects, namely, Daniel Otieno Omondi, Kennedy Oyoo Mboya, and Clifford Okoth. President Uhuru Kenyatta sacked Echesa in March last year. He was later arrested alongside other politicians in a probe into criminal gangs in Matungu, Kakamega County. The former CS then sued the Director of Public Prosecutions, DCI, Attorney General and Inspector General of Police over the arrest. This is not the first time government offices - including the office of the DP, State House and Department of Defence - are being linked to cartels who swindle unsuspecting business people keen to do business with the government. On August 14, 2018, seven suspects were arrested at a residence in Westlands for masquerading as officials from the DP’s office. They were alleged to have fraudulently obtained 700 laptops valued at Sh320 million from businessman Stephen Musyoka, which were to be supplied to the deputy president’s office. Investigations have since established that a group with suspected links to rogue staff at State House and the DP’s office lure business people with the promise of clinching fake ‘restricted’ tenders. The targeted victims are invited for meetings inside government offices to win their confidence. Police say separate complaints filed by victims indicate that the gangs masquerade as senior security officers and State House employees. They also forge job IDs, local purchase orders and delivery notes with letterheads and stamps.