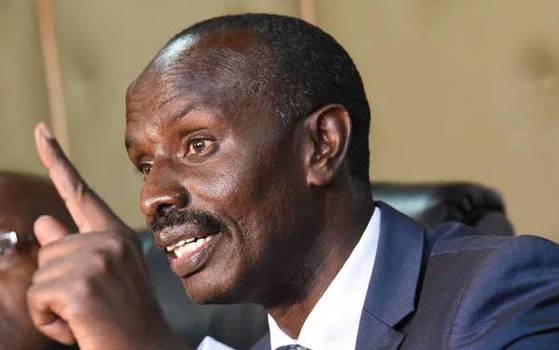 The Secretary-General of Kenya National Union Teachers (Knut) Wilson Sossion has urged the Cabinet Secretary of the Ministry of Education Prof George Magoha to convene a meeting with the union to discuss the plight of teachers deployed in North-Eastern region. Speaking to KTN News in an interview on Tuesday morning, Sossion (pictured) condemned the incident in which Al-Shabaab militants killed three non-local teachers on Sunday morning in Garissa. Sossion said yesterday’s terror attack on the teachers was the fourth one and blamed the re-occurrence of the incidents on the poor staffing norms by the Teachers Service Commission (TSC).

“The policy that Teachers Service Commission adopted by employing teachers from the rest of the country and deploying them to North Eastern was not the right thing at all,” he said. “If anything, it goes against the UNESCO teaching-training and deployment policy which states that in any tribe or clan, we must create teachers to teach children from such communities for cultural reasons.” The Knut boss lashed at the Teachers Service Commission for backpedaling on the issue. "Dr Nancy Macharia (TSC boss) and Dr Belio Kipsang (Education PS) approached me and we had a meeting where they asked us to allow them recruit teachers with D plus and they went and kept quiet,” he said. “It (TSC) failed to provide a solution in 2015, 2017, 2018 and 2019. They engage in mere Public Relations and cannot offer a solution.”

The visibly angry Knut boss fired a warning to the Ministry of Education the union could decide to mobilise teachers to exit the region if the situation is not addressed. “We have written to the Education CS for a meeting [to discuss the matter] and if we are not granted, we will mobilise teachers to move out. Teachers are already calling me that they want to move out,” he revealed. Mr Sossion, who is also a Nominated Member of Parliament has however suggested to the government to consider hiring teachers from the local communities inhabiting the North-Eastern region, arguing that such will solve the problem. He said that teachers drawn from other communities have become targets of the terrorists and their networks making it dangerous to deploy them. He stated: “We must identify boys and girls who have graduated from secondary schools from the communities and they can be registered tomorrow and taken to class. Teachers were deployed wrongly in the region. We will be wrong not to propose solutions.”

When asked whether removing non-local teachers will amount to alienating teachers and parents in the region, Mr Sossion said that teaching is not like a security sector or business. According to him, the government must start tapping talents in the region by recruiting untrained teachers who will be trained over time to bridge the gap. Yesterday after the attack in Garissa County, the TSC issued a statement condemning the attack.  The TSC affirmed that it was devoted to ensuring that the teachers were safe. The commission in its statement did not hint at reviewing deployment policy but urged teachers serving in the region not to despair. “The Commission calls on all teachers to remain calm and continue serving the innocent children. I would like to assure them that the commission is working government security agencies to normalise the situation at the school and its environs,” said the statement signed by TSC Secretary Ibrahim Mumin.