Nairobi
This year’s election has seen more women eye the presidency after more than two decades. 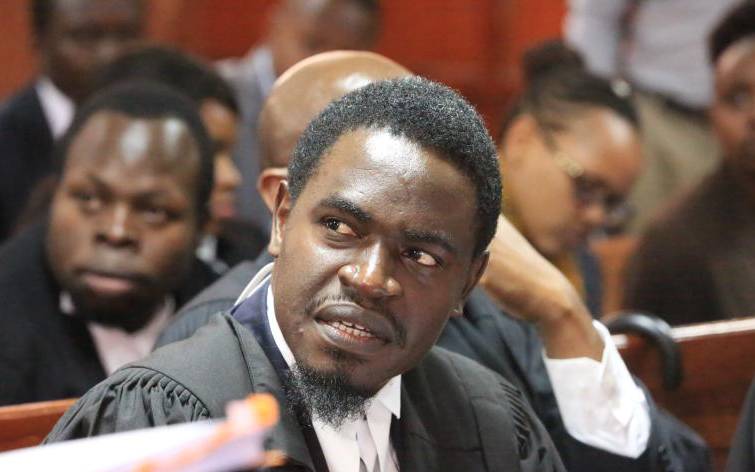 Members of the Law Society of Kenya are set to vote for change as they look forward to a more vibrant organisation. So far, the society’s council has cleared four candidates to contest LSK’s top seat, a prestigious position that elevates the holder to an upper status at the end of his term. The election slated for February comes at a time when the Judiciary is facing an array of challenges and the society deeply divided mainly between the younger and old generation.

This year’s election has seen more women eye the presidency after more than two decades. Candidates cleared to vie for the position of president are Nelson Havi (pictured), Maria Mbeneka, Charles Kanjama and Harriette Chiggai who have practiced law for at least 15 years or served in the council. The LSK presidential candidates have taken their campaigns to seminars and social media where they are selling their two-year agenda for the society. Havi, who is promising to reform the society “and restore its lost glory”, was finally cleared to vie for the position after his attempt to contest in 2017 was thwarted due to age. But even as he continues with his campaigns to woo members to vote for him, Havi is a worried man because of what he terms as “people from Gatanga out to control the election”.

“We need an independent, free and fair election. The council has no powers to elect the independent election committee. Let members decide the names to sit in the board at the Annual General Meeting or the candidates to pick one person of their choice,” he said. Havi said he will ensure LSK represents its interests and the public as a whole by upholding section 4 of the Law Society of Kenya Act. It is this section that outlines the society’s functions as assisting the government and the courts in matters regarding legislation, administration of justice and the practice of law. It is to also assist members of the public in matters relating to ancillary or incidental to the law. For Mbeneka, who is a member of the current LSK council and that of the Commonwealth Lawyers Association, her call for action is for all members to stand tall, united and engage for the betterment and unification of the organization. The experience she has gathered over the years motivated her to contest for the highest position in LSK as one who can influence policy through the rule of law. The lawyer, who also serves as the Laikipia County First Lady, has already unveiled her nine-point manifesto as she seeks votes from members across the country in her campaigns. She advocates for one society, promotion of the rule of law, practicing certificates, empowerment and support of the branches, self-care policy, each one help one, legal aid programmes, an application to enable members access information and establish an e-library.

On the issue of divisions at the society, Mbeneka said the young lawyers need to learn from their seniors and there is need for members to accommodate divergent opinions. If elected, she promised to work towards the amendment of the law to allow the society to print membership certificates for its paid-up members, instead of the current rule that gives the Judiciary’s registrar to do. Section 21 of the Advocates’ Act provides that the registrar shall issue certificates authorizing members who have paid their subscription fees to practice as advocates.  “Members have been missing out on jobs because the Judiciary takes eight months to print the membership certificates. There are institutions that require a copy of the certificate to confirm if one is an active lawyer before being awarded a contract,” she said.

How a heifer worth Sh20,000 led to violence that claimed eight lives