Pope Francis kisses nun after she promises not to bite

World
In a video seen by Standard Digital, the pontiff asks jokingly, "You bite… Promise you won't bite."

Pope Francis was walking through a large hall on Wednesday when a nun asked him for a kiss and he said yes, but on condition that the nun did not bite. In a video seen by Standard Digital, the pontiff asks jokingly, "You bite… Promise you won't bite." The nun nods and Pope Francis bestows his blessings on the nun with a kiss on her cheek. The joyous woman then jumps up and down shouts “Thank you, Pope”.

The Pope then continued to greet the crowd. 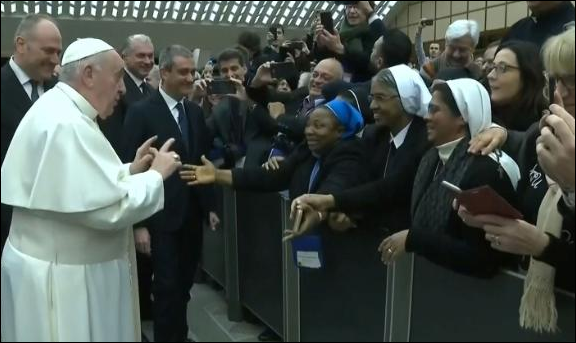 The incident happens barely a month after Pope Francis angrily slapped a woman who yanked him toward her in St. Peter's Square, Rome, when he was greeting children and pilgrims. He was upset and slapped the woman’s hand in order to free himself from the grip. The video of that incident went viral on social media and Pope Francis later apologised, saying he had set a “bad example”.

SEE ALSO: Influencer who shared video dancing as 'naughty nun' scared to go out amid backlash

According to Reuters, Pope Francis, unlike some of his predecessors, is usually very informal with well-wishers at non-religious events. He stops to kiss babies, bless the handicapped, and allowing hundreds of people to touch his hand. However the pontiff frowns on allowing people to kiss his hand at large events, saying he does not want that gesture of reverence to spread germs.

Health workers strike is still on