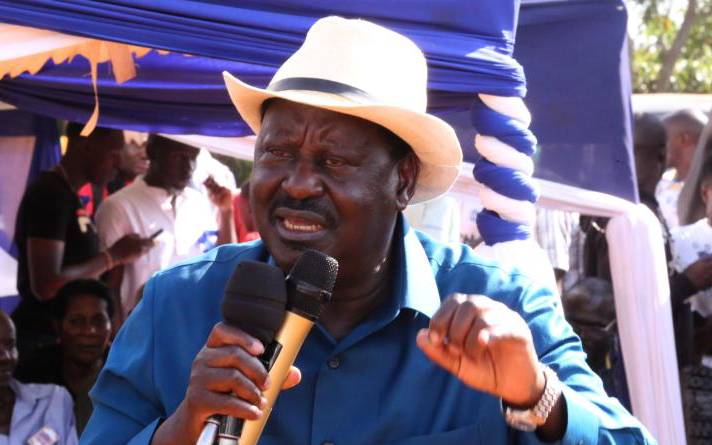 National Super Alliance (NASA) leader Raila Odinga (pictured) may have fallen out with his coalition partners Musalia Mudavadi, Kalonzo Musyoka, and Moses Wetang’ula, but it seems a legal provision will prolong their troubled union. Despite threats from Raila’s Orange Democratic Movement (ODM) that it would dump NASA, a clause in the coalition agreement renders such a move inconsequential.  Cobbled together

For NASA to collapse, three affiliates must leave the marriage, which means any move from ODM to walk away would allow the other parties – Wiper, Amani National Congress (ANC) and Ford Kenya – to wave the NASA flag ahead of the 2022 elections.   This explains why officials of the three parties, led by Mr Kalonzo, Mr Mudavadi and Mr Wetang’ula, respectively, have dared ODM to quit the coalition that was cobbled together in the run-up to the 2017 polls. They are alive to the legal implications of the move, and it is against this backdrop that ODM, which has fallen out with its three other partners, would be hard-pressed to leave. The party’s exit would allow its partners to use a coalition that the Orange party feels their leader, given his political clout, built. As a result, ODM would rather stay in NASA, even if just for nuisance value.    Just before the Kibra by-election in November, ODM Secretary General Edwin Sifuna threatened that his party would leave the coalition in remarks that suggested the other partners were political baggage.

“We have known these people as parasites and leeches, which we have carried on our back,” he said.  He spoke after ANC and Wiper fronted candidates in the Kibra race. ODM had expected its coalition partners’ support for candidate Imran Okoth, who eventually won the seat. However, on being reminded about threatening that ODM would leave NASA, Mr Sifuna blamed the media for fuelling discord in political parties. “It is you people in the media that are creating divisions... You are writing about political parties every day. It is Christmas time, don’t you have other stories to write,” he asked.  Internal tensions

Despite the fallout with Raila, Kalonzo, Mudavadi and Wetang’ula have maintained their bond. The three attended last week’s launch of the ANC leader’s autobiography, which sparked bitter exchanges between him and Raila. And for as long as this bond stands, NASA partners are stuck together until 2022, despite the walk-out threats and internal tensions that have consistently threatened coalition unity. ODM has previously come under fire for treating its partners as irritants, especially after it refused to share money from the political parties fund with its affiliates. It is demands for this money that prompted Sifuna to say ODM was ready to chart its own path. However, the Orange party is yet to make good its threats to jump ship, even as a section of affiliate party officials dared the party to go ahead and leave the coalition. “ODM said they will move out. We are waiting for them to move out so that the rest of us can continue as NASA. The coalition cannot collapse because three parties must leave for that to happen,” Ford Kenya Secretary General Eseli Simiyu said. “On funds, we will get the money however long it takes. Already, ODM has pulled out, they are just hanging on so that the rest of us have no space to manoeuvre. When we complain, they send their secretary-general to abuse us. They want their party to remain in the coalition so that they can continue dominating us and calling us complainers.” ANC Secretary-General Barrack Muluka, when responding to questions on whether his party would leave the coalition as a result of mistreatment from ODM, said it is the Orange party that should leave NASA for failing to adhere to an agreement to share the money meant for political parties. “Why should we pull out of what belongs to us? We were the founders of NASA. It is those who don’t want to carry out their obligations who should pull out,” Mr Muluka said. “They said they were going to pull out, we told them to write a letter to the registrar .... The rest of us are working nicely.” Wiper Vice-Chair Mutula Kilonzo Jnr said it is not pragmatic for any party to leave the coalition “because it does not make any difference”. “The coalition agreement says three parties must leave if the coalition is to fold,” he said. Makueni MP Daniel Maanzo warned that should Raila leave NASA, “he will be politically finished”. “Raila ... has no choice but to work within the original NASA. If he disorganises the party through people like Sifuna, he will lose. NASA must remain together. If there are other issues, they can be arbitrated. He is free to pull out, but he does not have any other configuration,” Mr Maanzo said.