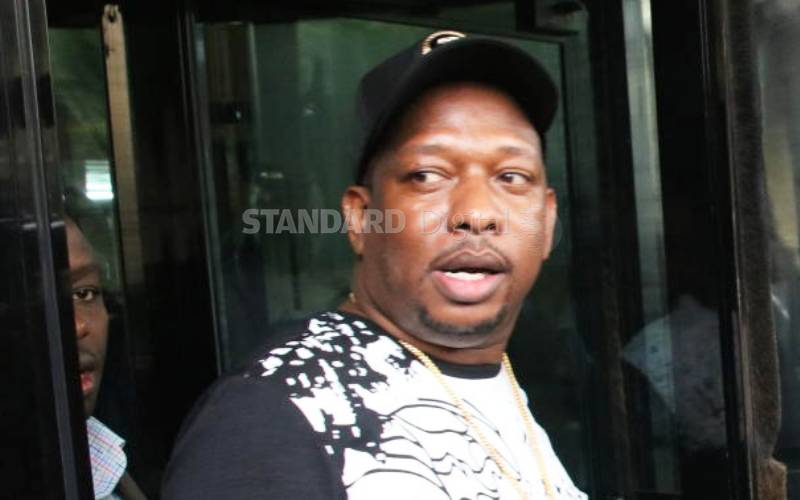 Nairobi Governor Mike Sonko (pictured) has been apprehended in Voi. This came hours after the DPP ordered his arrest. During a press conference in Nairobi this morning, DPP Noordin Haji announced that the governor would be questioned over the loss of Sh357 million of county funds.

@EACCKenya confirms that Nairobi City County Governor Mike Sonko Mbuvi has been arrested while escaping arrest at a road block in Voi and is being transferred to Nairobi to face charges of corruption and economic crime.

Haji said his office had enough evidence to charge the governor. He ordered police to probe attempts to hinder the investigation. Officers from Nairobi County Government who facilitated or benefitted from the irregular procurement and payments were listed as County Secretary Peter Mbugua; Head Supply Chain Management Patrick Mwangangi; Negotiation, Tender Opening and Evaluation Committee members Edwin Kariuki, Lawrence Mwangi, Preston Mwandiki and Clerical Officers Wambua Ndaka and Andrew Nyasiego. This comes a few weeks after Sonko failed to stop the Ethics and Anti-Corruption Commission (EACC) from investigating him over corruption. The agency is also investigating the governor over alleged past criminal records.

Sonko wanted the court to temporarily restrain the commission from prosecuting him, but Justice James Makau declined to issue the order. Instead, Justice Makau transferred the case to the anti-corruption division of the High Court. Haji said Sonko would also be questioned over unlawful acquisition of property and money laundering, among other economic crimes. The DPP admitted that investigation into the case had been challenging because of the accused's repeated attempts to obstruct the probe. On November 6 this year, Sonko appeared before the anti-graft agency in a day punctuated by confrontations between police and his supporters.

Mr Sonko was summoned to the Ethics and Anti-Corruption (EACC) offices at Integrity Centre to shed more light on a self-declaration form submitted to EACC in 2017 while vying for governorship. Through a letter dated October 28, EACC claimed the county chief lied about never being convicted of any crime in his self-declaration form. Sonko is claimed to have been charged in Mombasa law courts in 1997 for making a document without authority contrary to section 357(a) of the Penal Code. In March 1998 the investigators' documents showed that the governor was convicted and fined Sh200,000 or in default serve six months in prison. He was committed to Shimo La Tewa Maximum prison to serve his custodial sentence having failed to raise the fine, according to the documents. During the press conference, Haji criticised the Senate for allowing Kiambu Governor Ferdinand Waititu to run a parallel office while his case was still in court.

The DPP warned Waititu and his Samburu counterpart Moses Lenolkulal against violating their bail terms. "We shall take action and arrest them if they do," Haji added. Senate Speaker Kithure Kindiki on Wednesday permitted Waititu and Lenolkulal to conduct official duties as governors but not access their offices. Waititu appealed the High Court ruling that barred him from accessing the office. The case is yet to be determined.