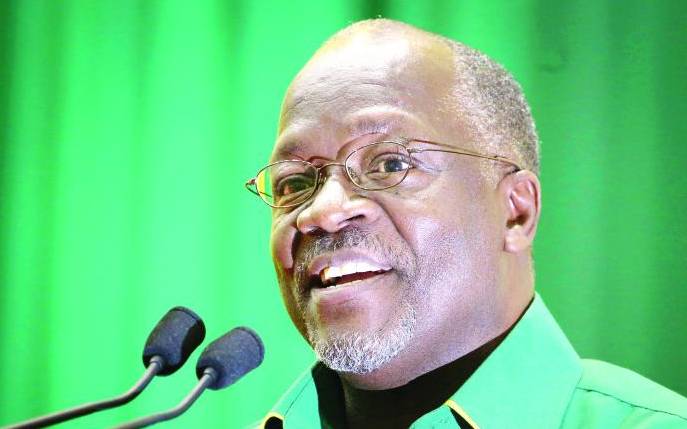 The University of Dodoma, Tanzania's biggest public learning institution, on Thursday conferred an honorary doctorate degree to President John Magufuli (pictured) in recognition of his outstanding leadership. Benjamin Mkapa, UDOM chancellor and former Tanzanian president, conferred the degree on President Magufuli at the university's 10th graduation ceremony held on the outskirts of the capital Dodoma and televised live by national broadcaster--Tanzania Broadcasting Corporation. Faustine Bee, UDOM vice-chancellor, said the university decided to confer the degree on President Magufuli in recognition of his efforts in improving the country's economy through his industrialization agenda.

Other recipients of the honorary degree conferred by UDOM were former Jakaya Kikwete and former Prime Minister Rashid Kawawa (deceased) who were awarded in 2010 for their exceptional leadership. In his acceptance speech, President Magufuli said he received the honorary degree on behalf of all Tanzanians, including farmers, fishermen and livestock keepers who have in one way or the other contributed toward achievements made by his administration. He commended the east African nation's past administrations of presidents Julius Nyerere, Ali Hassan Mwinyi, Benjamin Mkapa and Jakaya Kikwete for the roles they played in transforming the country's economy. Magufuli, who took office on November 5, 2015, explained a catalogue of measures that he took in order to boost revenue that was used to implement development projects. He mentioned such measures as boosting tax collection, suspending foreign travels by public servants, removing 20,000 ghost public workers and 14,000 public workers with inferior academic credentials and fighting corruption.

SEE ALSO: Kenya-TZ border dispute could have been avoided

Magufuli said money saved from these measures was spent in provision of free education, increasing higher education loans and improvement of education infrastructure, including construction of classrooms and laboratories across the country. During his four-year administration, said Magufuli, his administration has implemented flagship projects, including Julius Nyerere hydropower project in the Rufiji basin, standard gauge railway, expansion of ports, construction of road networks and purchase of planes for the country's airline. He said under his administration over 4,000 new industries were constructed as efforts toward making Tanzania a middle income status by 2025 gained momentum.

How to keep your employees motivated