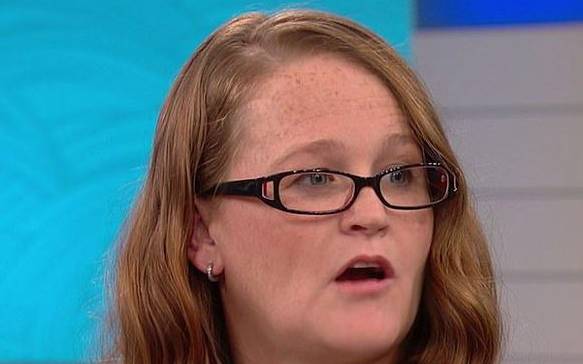 A woman whose stepfather kidnapped her when she was 11 years old and forced her to have nine of his children has revealed how she finally slipped his clutches. Henri Piett, 63, abducted his stepdaughter Rosalynn McGinnis (pictured) from her school in the US state of Oklahoma in 1997 in retaliation against her mother and kept her trapped for nearly two decades. He took the schoolgirl to Mexico, where he forced her to 'marry' him and bear nine of his children over a period of 19 years.

Now, Rosalynn has told how a chance meeting with a pair of strangers who spotted the odd 'family' in a grocery store helped her make her dash for freedom. Piette was arrested in Mexico in September 2017, a year after Rosalynn managed to flee with eight of her nine children and call the police, DailyMail.com reports. In a new interview on The Dr Oz. Show, which will air tonight in the US, Rosalynn, now 34, has recounted the chance meeting in a Oaxaca grocery store that helped her finally flee her captor. In a clip ahead of the segment, Rosalynn can be heard describing to Dr Oz how her captor was able to take her as a young girl, and control her. She told Dr Oz: "As an adult now I look back and I can see exactly how that he was grooming me the whole time. But as a child you don't know those things."

Rosalynn then described the extraordinary chain of events that led to her and her children finally escaping evil Piette. "We were in the grocery store, we were in front of them, and we had a bunch of kids, of course, and it was me and Henri Piette.  "The age difference and all the children. Actually, we were short on the bill to pay for the groceries and they paid it for us," she said. 'They asked... where we lived. It started like that. Henri was the type that always kept people away. But they knew something wasn't right. So, they decided to do something about it,' she said. The family moved, but the couple found out where they were and the woman spoke to her, she tells Dr Oz in the clip.

'We moved and they found out where we were and she’s like 'I know there's something wrong. If you can ever get away, I'll help you'." She also told Dr Oz her nine children did not know the truth about their mother's tormentor until she fled. "They didn't know. I kept the truth from them until I escaped from Mexico. They were really shocked and they've been through- especially my older children- [a lot]. "I mean, the reason I didn't tell them because of course, how much it had damaged me. I didn't want them growing up knowing that." Rosalyn told Dr Oz how Piette would hit the children, and she would try to stop the "horrible" abuse. "He would tell them they were animals, he would treat them like animals. But the only reason that they're alive is because your mother's here. Otherwise if she wasn't that I'd kill all of you."

Snatched by her stepdad

Piette, 63, first sexually abused Rosalynn when she was 10, before 'marrying' her a year later in a ceremony officiated by his 15-year-old son, according to reports. She claims her mum found out about the abuse and ended her relationship with Piette, reportedly moving into a women's shelter for victims of domestic abuse with her family. But in 1997, Piette managed to snatch Rosalynn from her school in retaliation, and took her on the run. Her mum searched desperately for her girl, but authorities never managed to catch up with Piette, as he moved around America and shifted to Mexico with the kidnapped schoolgirl. Over two decades, he raped and abused her over a hellish two decades, forcing her to wear disguises and foiling Rosalynn's numerous attempts to escape him. Rosalynn reportedly suffered a miscarriage when she was 13 and was forced to flush the foetus down the toilet by Piette. She was forced to give birth to her first child in the back of a van, aged just 15. She claims Piette spent all of their cash on drink and drugs, and beat her with an assault rifle, beer bottles and a baseball bat. He forced her to take on fake identities and beg for cash as a panhandler, as they travelled around Mexico and the United States, prosecutors said, according to the Washington Post . Piette had spoken out about the case after Rosalynn fled- calling her account "lies" and describing them as "married" and in love. It has previously been reported that the couple who met them in the grocery store became suspicious of Piette, after he accidentally revealed his real age, and had noted that the family appeared malnourished. After they offered to help her, Rosalynn eventually arrived at their doorstep with her eight of her nine children - the eldest had already left home. The family was brought back to safety in the US, and Piette was arrested in 2017 when he attempted to cross the border. He was found guilty on kidnapping and child abuse, rape and molestation charges in June. He has been compared to Josef Fritzl , who kept his daughter prisoner for decades as a sex slave in a hidden basement. Piette faces life in prison for his federal crimes, but must still stand trial in Oklahoma.