MPs plot to hide funds use from public scrutiny 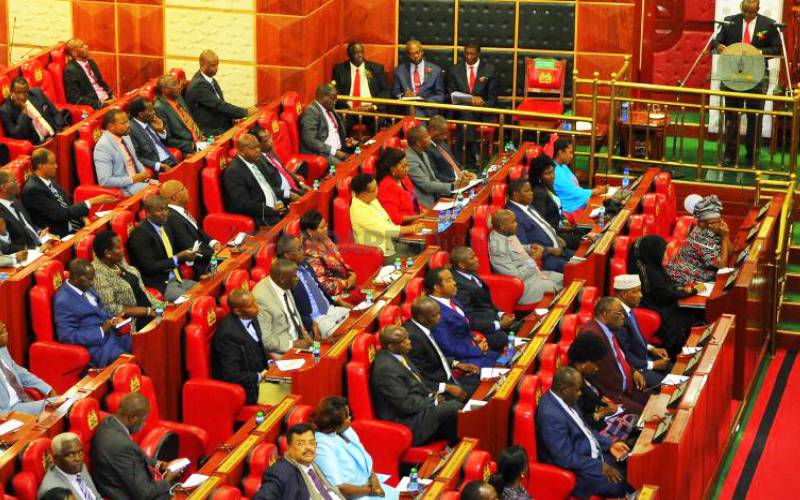 Lawmakers have proposed a Bill that will make it more difficult for the Auditor General to detect theft and misuse of funds allocated to Parliament. The proposed legislation also wants such funds to be out of bounds for reallocation by the Government. The Constitution of Kenya (Amendment) (No 3) Bill, 2019, will create a parliamentary fund, the equivalent of a safe whose key is only kept by MPs.

The billions of shillings received by MPs for each financial year will be channelled to the fund in a single package, where they will budget and spend at their pleasure. “There is established a fund to be known as the Parliamentary Fund, which shall be administered by an officer appointed by the Parliamentary Service Commission… The fund shall be used for administrative purposes as may be necessary for the discharge of the functions of Parliament,” states the Bill sponsored by Ndaragwa MP Jeremiah Kioni, who is also the chair of the National Assembly Constitutional Implementation Oversight Committee. “Upon approval by the National Assembly, the expenditure of the PSC shall be a charge on the Consolidated Fund and the funds shall be paid directly into the Parliamentary Fund,” the Bill adds. It seeks to amend Article 127 of the Constitution, which establishes the Parliamentary Service Commission (PSC). Without effective laws to monitor such a fund, MPs’ expenditure could escape scrutiny by oversight institutions such as the Auditor General and the Controller of Budget (CoB).

With their money ring-fenced, MPs’ salaries will be paid on time, they will not fail to go for numerous trips abroad and all allowances will be paid without delay. It also means MPs can readily implement some of their favourite projects without hurdles from other Government institutions such as the CoB and the Treasury. “The Bill seeks to enhance the independence of Parliament by creating a parliamentary fund in which all monies appropriated to Parliament will be deposited,” reads the Bill introduced in the National Assembly last week. The Bill states that rules for the regulations of the fund will be developed by Parliament. It does not, however, give a time frame. The fund will be administered by an officer appointed by PSC. The proposals also mean money unspent by MPs in a particular financial year cannot be returned to Treasury for reallocation as happens with other ministries and departments.

The law provides that all monies not spent before June 30 by ministries and departments is returned to the Treasury for reallocation.  In the last Budget, MPs received Sh39 billion to pay salaries and implement their projects. The new proposals, if passed by the House, will also apply to members of the County Assemblies (MCAs).   The Bill comes in the wake of another returned to Parliament by President Uhuru Kenyatta about three weeks ago, which sought to give the PSC power to regularly review domestic and international travel allowances. MPs have in the past been put in a spot for passing laws that protect their interests, much to the chagrin of the public. They have also been at the centre of battles with the Salaries and Remuneration Commission (SRC) over illegal allowances. “There must be a good reason why Parliament does not want to operate the way other institutions operate. Creating a parliamentary fund would set a bad precedent for other institutions. Lawmakers should be satisfied with what is there,” said economist Gerishon Ikiara. The Bill has another proposal that seeks to safeguard remuneration and benefits due to lawmakers from being varied to their disadvantage. It also proposes to cushion MPs against court cases in the discharge of their duties. “A Member of Parliament is not liable in an action or suit in respect of anything done or omitted to be done in good faith in the lawful performance of a function of Parliament,” the Bill reads.

“This Bill seeks to amend the Constitution so as to restrain courts from interfering with matters pending consideration or being proceeded with before Parliament, the county assemblies or any of their committees in line with international practice, where courts only intervene where Parliament has executed its mandate,” it states. It adds: “In public law, Parliament and the High Court are equal and co-ordinate organs of Government exercising separate constitutional functions. Therefore, the High Court enjoys no supervisory powers over Parliament but its powers are limited to determining constitutionality of legislation made by Parliament,” reads the Bill.