Shame of arrests based on rumours

Nairobi
But as the court would soon find out, some of the accused persons were victims battling to save their land. 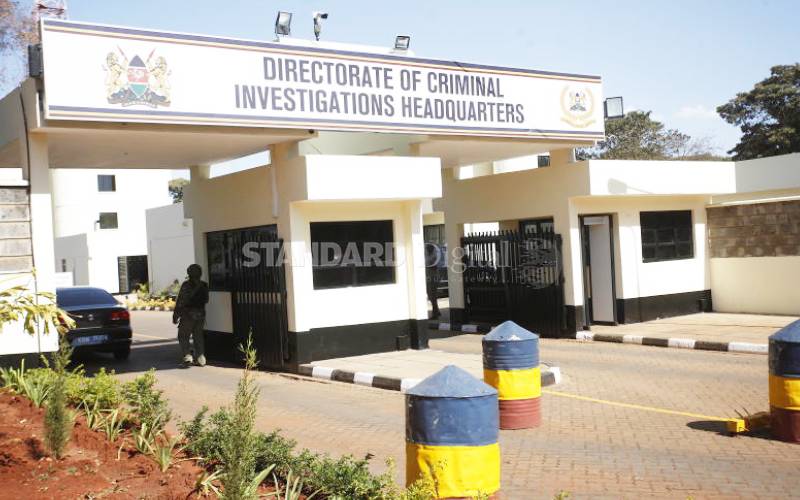 An investigator tasked with cracking the Kihiu Mwiri murders admitted in court that officers relied heavily on rumours in their attempt to crack the cases. The detective sat in the Directorate of Criminal Investigations (DCI) offices, recorded statements, made arrests and presented 18 suspects in court. Inspector John Wahome told the court he had drawn no other connection between the accused persons and the deaths of Peter Kimani Kuria, Paul Muhuhi, Josphat Kibe Nyoike and Zachary Chege Kiratu, who were killed in cold blood.

“I don’t have any direct link between the deaths of any of the four people and any of the accused persons. All we had is rumors and speculation,” Mr Wahome testified during cross-examination by lawyers of the accused. Another blunder that came out in court was that the officer failed to carry out an identification parade. According to him, he knew that he had the right suspects since he had information from villagers. “I charged the accused because they were mentioned by other people during investigations. The witnesses said the accused were involved but I was unable to establish what they did,” Wahome testified. But as the court would soon find out, some of the accused persons were victims battling to save their land. According to court testimony, those who had been implicated in the murders were 28 but 10 names were dropped by the police.

After the prosecution presented its evidence, Justice Joel Ngugi, on December 14, 2017, ruled that 14 suspects had no case to answer. “I have easily come to the conclusion that as a matter of law, the evidence adduced has not led to any reliable evidence linking 14 of the 18 accused person with murders canvassed in the information upon which a reasonable tribunal might safely convict upon,” the judge ruled. That left Joseph Thiong’o, Henry Ngugi, Julius Kanyiri and John Njoroge to defend themselves against the murder charges. In the end, however, Justice Ngugi also acquitted them for lack of evidence. “In the end, the trial for the murders of Peter Kimani Kuria, Paul Muhuhi, Josphat Kibe Nyoike and Zachary Chege Kiratu turned out to be no more than a window-dressing exercise,” the judge observed.

That brought a shameful end to the three-year trial that had not resolved the mystery disappearances and deaths that plagued the Kihiu Mwiri land company. But Justice Ngugi observed that since the start of the criminal trial, some peace had returned to the once blood-bathed community. “Perhaps the trial served notice on the denizens of Kihiu Mwiri that the rule of law is alive and well, and that it serves the prime objective of ensuring order and security in the society.”  The court heard that one of the accused people ended up in the dock for shifting from a group under Kimani to a camp run by rival Kihiu Mwiri chairman Kariuki Macharia. The court also heard that Kimani had written a statement to the Murang’a DCI, in which he had identified people who were allegedly planning to kill him.

Nine people were charged with attempted murder before the Murang’a Magistrate’s Court in criminal case number 388 of 2015. Wahome, however, told Justice Ngugi he did not know what happened to the case. He revealed that the killers had outwitted the police, and they even continued executing their targets and making others disappear without a trace while the investigations were ongoing. Asked about Ward Four, a group alleged to be behind the killings, Wahome testified that he had nothing to identify its members. “I have heard about members of Ward Four. There were no special features of identifying the members. I did not come across the register of Ward Four. I did not arrest the accused while attending a meeting of Ward Four. There was no badge or ID card for the members.” Justice Ngugi observed that although Ward Four was said to have caused havoc and fear, none of the witnesses linked the accused to the group.

“There was much evidence to show that members of the Kihiu Mwiri community were frightened by Ward Four, but no actual evidence was adduced to show that this group actually committed the murders charged, and which of its members did so. “In any event, there was little evidence adduced at trial to link the amorphous group called Ward Four with the actual killings,” the judge said. Although the State lined up 17 witnesses, four of them gave general statements without pointing a finger at the accused. Some of the witnesses denied statements they had recorded before the DCI, and attributed differences in their oral testimony and written statement to mistakes by investigating officer. One witness could not recall which language he used while recording his statement. He testified that it might have been Kikuyu or Kiswahili, or a mixture of the two.