SDA church kicks out 15 over battles

By Kamore Maina | 3yrs ago

The wrangling Nairobi Central SDA Church has expelled 15 of its members ahead of the annual camp, which kicks off today.

At the same time, the chaos that have rocked the church have forced top government officials who worship there to seek sojourn in alternate churches.

The Wednesday’s expulsion of the 15 by the Central Kenya Conference president Pr John Kiragu Ngunyi is expected to add fuel to the fire expected in today’s service. A guest speaker, Dr Lael Caesar, will be presiding over the camp themed “saved by His grace”.

The 15, the church claims, are the main trouble-makers.

“This is to let you know that the persons named do not belong to the Seventh Day Adventist faith and their names were dropped from our books,” the letter addressed to all pastors and churches of the Central Kenya Conference says.

But it is the letter’s last paragraph that may trigger more confusion as the named members assert their innocence and deny the claims.

“You are strongly advised not to entertain or give them audience in any of our churches for the sake of peace and unity in church.”

A pointer to the high stakes in the management of the conflict was last week’s bizarre appearance of the head of Police Flying Squad Musa Yego to quell the chaos.

Yesterday, a high-level meeting between the two warring groups was held in Nairobi in an effort to reconcile the parties.

An earlier meeting held at a hotel in Kilimani, Nairobi, failed to reach a consensus last Wednesday as the warring parties declined to cede ground.

Ndolo said adequate security measures, which he declined to reveal, had been taken to ensure ugly incidents are not witnessed in the church. Other police sources said the violence witnessed last week was a subject of discussion during the Nairobi County Security and Intelligence Committee meeting. 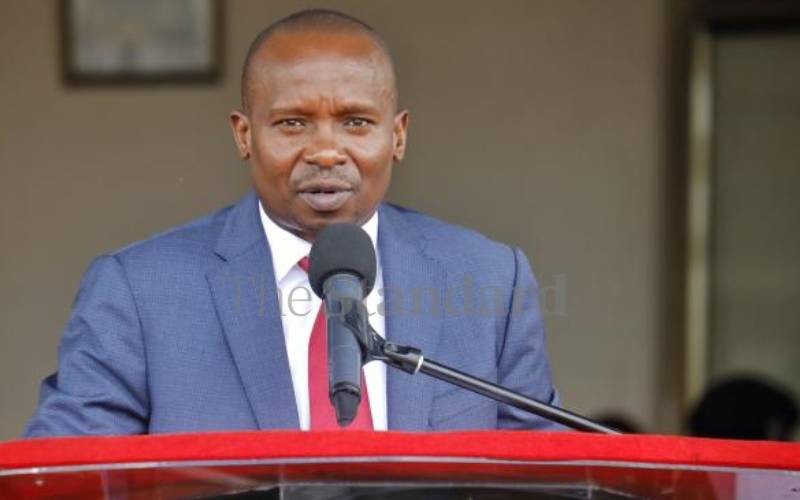 Kindiki defends officers, assures them of State protection
National
By Mike Ekutan
19 mins ago
After charcoal selling and divorce, Justina Syokau faces giants at PMVA 2022
Local News
By Standard Entertainment Team
25 mins ago
Premium Four IEBC Commissioners suspended as focus shifts to battle for selection rules
Politics
By Allan Mungai
55 mins ago
Premium My day out with the Freemasons, club with secrets and few answers
Europe
By Carole Kimutai
1 hr ago
.

By Mike Ekutan 19 mins ago
Kindiki defends officers, assures them of State protection