Six armed men have raided Thirdway Kenya party’s offices in Nairobi on Thursday night and shot at the party’s Secretary-General Fredrick Okango. Thirdway Alliance party leader Dr Ekuru Aukot has confirmed the incident via his twitter handle under the hashtag ‘Punguza Mizigo.’ He twitted: “Our party office Thirdway Kenya in Lavington, chalbi drive has just been invaded by 6 armed Nairobi. They have shot at our SG Fredrick Okango who ran and hid inside one of the offices. This comes barely few hours after Punguza Mizigo Bill passed. This a cowardly act.” 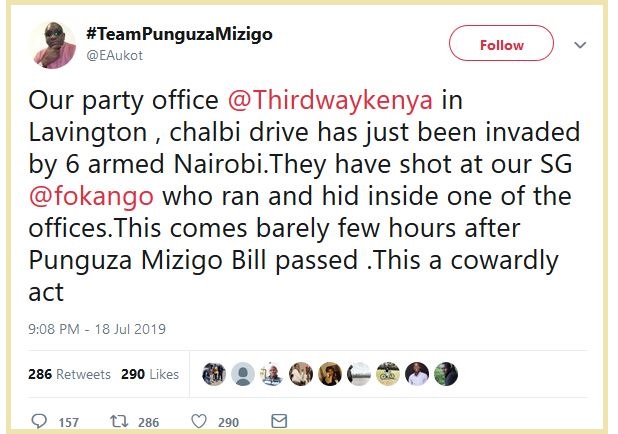 Earlier today, the party got a breakthrough in its bid to change the Constitution and reduce political offices to scale down the wage bill. This is after the electoral body IEBC confirmed that it had verified that ‘Punguza Mizigo’ Initiative steered by the party had garnered over 1 million support from the registered voters. IEBC stated: “The Commission has since verified that the initiative has been supported by 1,222,541 registered voters. This is, therefore, to notify the public and stakeholders that the initiative has met the requisite threshold as required by the said Article 257 (A) of the Constitution of Kenya, 2010.” More to follow…