Police: Blogger Alai to be charged with disclosure of terror information

Kenya
Alai was arrested on Tuesday for posting a gory picture of Kenyan police officers who were killed in the Wajir terror attack on Saturday.

Blogger Robert Alai will be charged with disclosure of information in relation to terrorist activities, the Anti-terror Police Unit (ATPU) has said. In a photo shared on social media, the blogger was pictured with a placard indicating his details and the offence he allegedly committed. Alai also wrote on his twitter that he was to be charged. “Robert Alai to be charged with disclosure of terror information,” he wrote on his twitter handle.

Alai was arrested on Tuesday for posting a gory picture of Kenyan police officers who were killed in the Wajir terror attack on Saturday. He was arrested following Monday’s warning by the National Police Service (NPS) with the National Cohesion and Integration Commission (NCIC) terming the circulation of the photos unpatriotic and illegal. 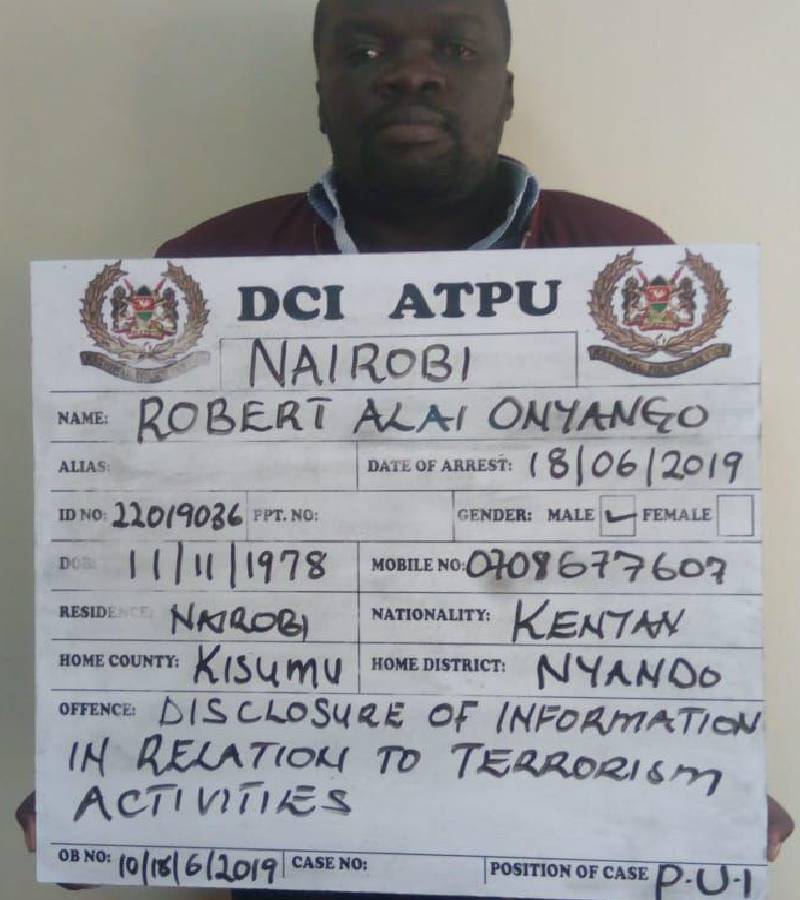 NPS and NCIC condemned the social media circulation of gruesome photos of the bodies of the officers who were killed during the attack. NCIC directed Robert Alai and any other person sharing the photos to pull them down.

Despite pulling down the photos, Alai was arrested and taken into custody for questioning.  “Whereas Alai has the freedom of expression, such publication can be interpreted as propaganda for war which is not protected under the Constitution of Kenya,” read the statement. Alai, however, accused the NCIC of failing to address serious issues affecting Kenyans such as ethnicity and violence in Marsabit. “I haven’t seen NCIC condemn ethnic appointments in government or address the real issues threatening cohesion like the current fights (sic) in Marsabit,” Alai posted on Twitter. He added that the commission was only after silencing people addressing real issues.

The blogger claimed he was told by police officers to highlight their issues. Alai bowed to pressure and pulled down the photos but vowed to engage the commission on how best to boost officers' morale. “I will continue to speak out for the poor police officers who are neglected and their allowances taken by “wakubwa.” We must give our men and women who die wearing uniform, respect, dignity, and the honour they deserve. We shouldn’t treat our cops like dogs. I am angry!!” he tweeted.